Carlton coach Michael Voss has warned his side to prepare for the “stress” Geelong will apply to his team, as the Blues face an audit in Saturday night’s blockbuster at the MCG.

The clash between the top-of-the-table Cats (12-4) and fifth-placed Blues (11-5) shapes as one of the games of the season.

Charlie Curnow is central to the Blues’ plans to topple a surging Geelong at the MCG on Saturday.Credit:Getty Images

The Cats, with a remodelled game plan and enjoying greater depth, are arguably premiership favourites, while the reborn Blues can emphatically prove they are a legitimate flag threat if they emerge victorious.

The inconsistent Blues have been unable to secure back-to-back wins since round 10 but, coming off the Charlie Curnow and Harry McKay show in Perth against the Eagles, have another chance. However, Voss understands how difficult it will be against a surging opponent that has enjoyed a nine-day break and is seeking an eighth-straight win.

“The challenge is really clear for us. Whenever you play against sides that sit in the top line, they put stress on every part of your system,” Voss said on Friday.

“We’ve gone to work really hard on where that sits for us but we’re far more reliable. We’ve got two or three good weeks under our belt of good form, in terms of system and our players. We’ve put ourselves in a great position to be able to challenge that.”

Cats coach Chris Scott praised the Blues on Friday, declaring they “look quite complete”, have no “obvious holes in any part of the ground” and “probably have the best key defender in the comp as well”, alluding to Jacob Weitering.

The same can be said about the Cats, who also thrive on contested possession and boast a gold-plated midfield led by Joel Selwood and a now-fit Patrick Dangerfield which has now been strengthened by Tom Atkins’ development. They also have a multipronged forward line, with pillars Tom Hawkins and Jeremy Cameron booting a combined 89 goals this season. Weitering and the much-improved Lewis Young will have the job of attempting to curtail the pair.

“It’s the last time we are on the MCG this home-and-away season. Saturday night, really big crowd forecast … it is good practice as well to deal with the extra attention that is on these sorts of games, extra pressure, even the perceived pressure that comes from playing on the MCG,” Scott said.

The Blues boast a game plan built on power, where they seek to win the ball at stoppages, burst from packs and deliver the ball to McKay, Curnow and Jack Silvagni. 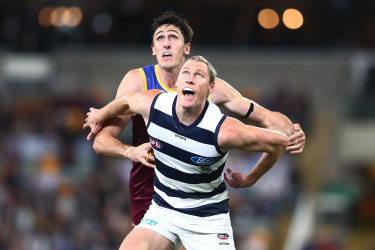 Mark Blicavs, arguably the most versatile player in the AFL, will have a key role to play against the Blues.Credit:Getty Images

“It’s going to be a big game. We’re expecting a big crowd but, importantly, it’s the next game for us to go out there and show what we’ve got,” Voss said.

“It’s very easy to look at one game and say: ‘That’s the game’, but you look at a body of work over time and the things that have impressed about Geelong is that their contest is really powerful.

“That’s something that we really pride ourselves on as well and we’ll continue to reinforce. But we’d like some supply down our end to give our forwards a chance and we’ll try and minimise them as much as we can.”

Just how the Cats employ Mark Blicavs will be intriguing. The versatile former steeplechaser was even used at stoppages on Christian Petracca and Clayton Oliver in the win over Melbourne last week. He could spend time on Blues’ ball winner Patrick Cripps.

“I see the logic in it when you have really tall guys … yeah, maybe, it would be good to see,” Scott said.

The Blues have dropped Josh Honey, a late call-up for Matthew Owies last week, and wingman Lochie O’Brien but both are emergencies. One could yet be the medical sub. Liam Stocker returns, while Voss said he was keen for mid-season draftee Will Hayes, named on a wing, to be given a full game.

The Cats have rested Jed Bews but key defender Jake Kolodjashnij is back. Former Hawk Jon Ceglar (foot fracture) continues his comeback in the VFL, with Scott hopeful of him earning senior selection.

Voss and Scott said their clubs were following stringent health-and-safety measures given the surging number of COVID-19 cases and the number of AFL players and staff, including Port Adelaide coach Ken Hinkley, unavailable this week.

“We’ve had some big conversations about it this week, we have to make some adjustments on how we operate,” Voss said.

“We might be able to manage it a bit internally, we’ll need to make some adjustments externally as well. We’ve communicated back to the players but, at the same time, it’s got to be business as usual.”

Related posts:
Previous Post: ‘I’d rather play against him’: Meet the De Konings, all 12 of them
Next Post: Dockers back Logue to curb Franklin’s impact