Ever since his NRL debut, people have watched Nelson Asofa-Solomona with the realisation that one day, his experience and maturity will catch-up to his man-sized body.

Perhaps that moment could be now and if it is the 200-centimetre forward could be the difference between another painful exit and the Melbourne Storm winning their first NRL title since 2017.

The New Zealand born prop is 24 and 121 games into this career.

He's no longer the towering teenager with the surprisingly sharp speed and ball skills, he's now a respected member of the Storm's first-grade side and is expected to be the starting lock when the Storm play Parramatta Eels in a qualifying final on Saturday night.

"The boys are keen to go to another level this year, hopefully go one better than last year," Asofa-Solomona said.

Storm teammate and mentor Jesse Bromwich has tutored Asofa-Solomona and had a front row view of his progress.

Bromwich has seen something click with Asofa-Solomona in the second half of this season and with regular starting lock Dale Finucane still returning from injury, Bromwich senses this could be his big mate's moment.

"He had a quiet start to the year but I'm expecting him to be our X-factor for the finals," Bromwich said.

"I've got full confidence in what he can do and he should too because look at his size, speed and everything he has got.

"I want everyone to know he is going to be really good for us."

Emotionally there is another factor that could be inspiring Asofa-Solomona and that is the departure of his dear friend Suliasi Vunivalu, who will join Rugby Australia next season.

The Fijian winger and the Wellington-raised forward formed a tight friendship soon after joining the club and have been inseparable since as they leaned on each other while adapting to NRL life.

"We have been soaking up the time we have left together," Asofa-Solomona said.

"The club had a get together [as a team] recently. We ended up going to the back while everyone was at the front having a good time and we had a bit of a tear together, talking about how we are going to miss each other.

"We have come up the ranks together. Back then we used to catch the train together after training.

"I will miss him heaps. It's a different type of friendship that comes once in a lifetime." 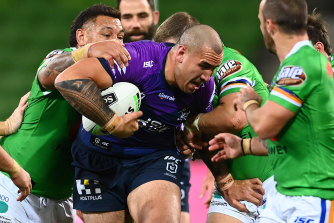 Vunivalu has been battling a pesky hamstring injury too and the Storm need him at his best, especially against an Eels side with powerful runners on both sides of the ground.

So the duo have pledged to leave no stone unturned in preparing for each game.

"He's going to do everything he can to play finals and play every game," Asofa-Solomona said.

"We made an oath we would make sure we eat properly and go to sleep on time because we never do.

"We have to make sure we send him out the proper way." 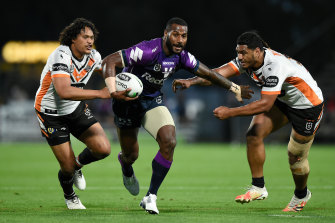 The Storm want to send Suliasi Vunivalu out in style. Credit:Getty Images

If there is one more thing to keep the big forward focused on the task at hand, it is his desire to be reunited his family and friends in Melbourne.

Asofa-Solomona recently scored a try and pointed to the 'V' that his side wears to acknowledge their fans in Victoria.

"It hasn't been tough in terms of living arrangements but in terms of missing people in Melbourne, 100 per cent," Asofa-Solomona said.

"My mum and dad are there. My friends are there. One of my friends just moved to Melbourne from Wellington when COVID-19 hit. So I feel for him and his wife.

"We just want to put a show on for them every week. This whole season is dedicated to the people back in Victoria."