Former tennis star Jo Durie has described Eddie Jones’ criticism of US Open champion Emma Raducanu as sexist, saying “no one ever complains about blokes going to galas; it’s always something that is thrown at women”.

Speaking after a 69-3 demolition of Tonga, the Australian suggested Smith needed to be kept away from off-field distractions and drew an unfavourable comparison with Raducanu.

“There’s a reason why the young girl who won the US Open hasn’t done so well afterwards,” Jones said. “What have you seen her on – the front page of Vogue and Harper’s Bazaar or whatever, wearing Christian Dior clothes.”

Durie, the former world No.5 women’s player, said they were “sexist comments” and took issue with the phrase “young girl”.

“Emma isn’t a girl; she is an 18-year-old woman,” Durie said. “Unfortunately, when you’re this famous, everybody likes to have their opinion about you. I don’t know her well myself, but she seems to have a good head on her shoulders and she just needs to play for at least a season and get used to life on the tour before anyone expects anything else from her.”

Coach Eddie Jones at an England training session on Friday.Credit:Getty

Many other sportspeople and commentators echoed Durie’s views. One of the strongest-worded responses came from Kate Richardson-Walsh, former captain of the Great Britain hockey team who won gold at the Rio Olympics. On Twitter, Richardson-Walsh said: “It’s certainly important for everyone to think about distractions … It’s also really important not to be an ill-informed, patronising, hypocritical misogynist.”

But rugby player James Haskell bit back on social media. Responding to more criticism of Jones from tennis commentator David Law, Haskell said: “Honestly how you think this is sexist is beyond me. It’s a point about distraction and the pitfalls of fame; that can happen to anyone. I can see you desperately want to incite the cancel mob, but you are going to need to do better than that.”

Tennis coach Judy Murray, the mother of former world No.1 Andy Murray, described the debate as “typical of what female athletes are up against, in terms of insensitive comments”. 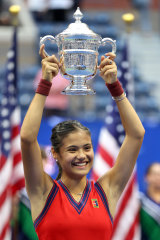 Emma Raducanu after winning the US Open in September.Credit:Getty

“For one thing, Jones clearly couldn’t remember her name,” she said. “Calling her ‘the young girl’ sounded dismissive. For another, Emma’s journey from doing A-levels in the summer to winning the US Open is so extraordinary that she hasn’t had time to catch up with what has happened. Of course she isn’t a seasoned pro yet. But what teenager wouldn’t want to enjoy a bit of her success by going to events and getting involved with fashion brands. Even now, Emma has only played two more events since the US Open. Her story isn’t remotely comparable to what Jones is talking about.”

Before the publication of Jones’ remarks, Raducanu gave two press conferences before this week’s event in Linz, Austria. She said her priorities had not changed.

“I have been quite busy since the US Open,” Raducanu said. “I’ve been really enjoying everything [but] I made it very, very clear to every single person in my team that I was not going to cancel one training session or practice session for any off-court commitments. That was a non-negotiable.”

The Jones debate erupted on the day Raducanu climbed into the world’s top 20 for the first time. She is only the fifth British woman to achieve this milestone in the Open era. The other four – Durie, Virginia Wade, Sue Barker and Johanna Konta – all went on to reach the top five.

Raducanu, who has won two of her four matches since lifting the US Open trophy on September 11, is due to face world No.106 Xinyu Wang on Wednesday (AEDT) in Linz. She has travelled to Austria with a small entourage consisting of her mother Renee and her agent Chris Helliar, but she remains unaccompanied by a coach. It seems, however, she now has an as-yet unnamed person in mind for her trip to the Australian Open in January.

As Durie said yesterday: “The only thing I would like to see is for Emma to sort out her coaching situation. At the moment, everything she is doing is a new experience for her because she has barely played any tournaments, so it would be helpful to have someone alongside her who knows the tour.”

The Wallabies are set to take on Jones’ England at Twickenham on Sunday (AEDT).