The key to beating England, argued forwards coach Dan McKellar at half-time, was to win the big moments.

And it was a fair enough call, given the Wallabies had botched a couple of very big moments in the opening half. A half in which they dominated early, and could have scored two tries in the opening quarter. And those tries, possibly, could have convinced fatigued England players, playing in their last game of the year, it wasn’t to be their night.

A dejected Folau Fainga’a at full-time.Credit:Getty

But it was only half right from McKellar, and only half the solution, too.

The problem was the Wallabies weren’t just losing the big moments. They lost small moments, too. Lots and lots and lots of them.

Small moments from minute one to minute 80 that undid any good work in building pressure on England, and let Eddie Jones’ men off the hook as the Wallabies fell to a 21-17 defeat at the SCG.

The big moment early proved to be fatal. One of the great escape clauses for coaches and players in modern footy is to assert they created plenty of opportunities, but just didn’t land the last pass.

Most times, it’s a work of fiction, rolled out to add a veneer of respectability.

The Wallabies’ examples in the first 10 minutes couldn’t have been starker.

Reece Hodge had an open Tom Wright available when he threw a wild pass behind him in the seventh minute. Just three minutes later, Taniela Tupou did something similar when he was given a yawning gap and only needed to draw and pass. He threw it at Nick Frost’s knees.

It is easy to underestimate the pressure of elite sport, and how it can bend the mind of experienced athletes into doing things they’d never do at training. But simple skills are trained for months and years to remain simple under pressure, and both passes will go down in the history books as bad mistakes. 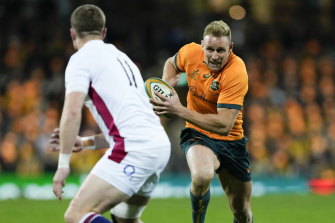 Reece Hodge had an open Tom Wright available when he threw a wild pass behind him in the seventh minute.Credit:AP

At the time, perhaps, the impact of the two errors didn’t loom as large. There was still 70 minutes to play.

But in those two moments, and in another Marika Koroibete break that was called up at the same time for a nothing penalty back at the ruck, the Wallabies fired some telling shots. Their incisive set plays were designed to expose gaps both near the ruck, and in the wide channel of Guy Porter.

And they almost worked. But England wised up, tightening near the ruck and deploying more defenders wide. Australia had worked on an England weak spot but failed to exploit it; failed to convert their chance.

The Wallabies scored a lovely try to take the lead, nonetheless, but then those small moments of madness began to pile up. The Wallabies gifted England metres by failing to exit their territory, one by kicking out on the full and another when failing to kick the ball out. England led at half-time.

The second half saw the Wallabies’ small problems continue to mount up, until they all suddenly became big.

A handling mistake from Noah Lolesio gave a try to England and then, in the last quarter, with Australia on the attack, they managed to draw back to within four points.

England turned the ball over twice, with the Wallabies unable to secure the ball. It was yet another small mistake. But at the end of a tightly fought, winnable series, it became a big problem.