A few months after Michael Cheika took the Waratahs to the 2014 Super Rugby title, he shook hands with Gus Pichot in Buenos Aires and agreed to coach Argentina.

The deal with Argentina’s then-supremo Pichot, which Cheika has never previously confirmed, would have seen him join the Pumas camp at the 2015 Rugby World Cup and then take over as head coach in 2016.

But then Ewen McKenzie walked into a post-match press conference and changed everything for everybody. In a shock twist, the then-Wallabies coach quit suddenly and the Australian Rugby Union came calling for Cheika. We want you to coach the Wallabies.

“And it shows you the class of these guys here, because we had made an agreement,” Cheika says.

“But when it (McKenzie resigning) happened, and I rang Gus, I said ‘it’s Australia, you know, it’s my country, I can’t say no’.

“And he understood totally. There wasn’t any carry-on, no nothing. And I really respect that.”

“He was going to be our head coach. He was going to help me to run the whole thing. We were very close,” Pichot said. “We had several meetings because we have a lot of friends in common. Without any engagement of contracts or anything, he gave me advice and help. We met five times and just talked generally about rugby.

“I loved to talk with him and I love how he coaches, I like he’s a family man. I just have a lot of time for Michael.”

The extra salt in Argentina’s wound came when Cheika went on to coach the Wallabies to victory over Argentina in the 2015 Rugby World Cup semi-finals, denying the Pumas their best-ever finish. 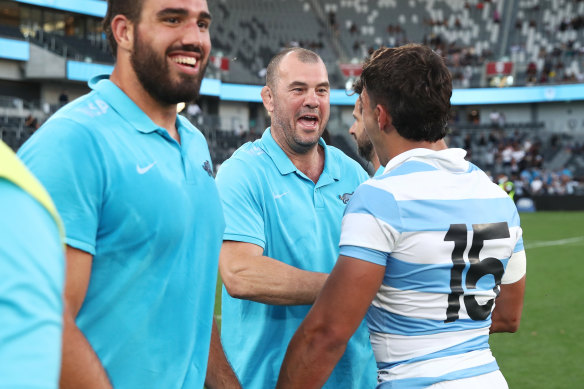 Michael Cheika worked as a consultant with the Pumas in 2020 and 2021.Credit:Getty

It is all history now, of course, but the events of eight years ago go some way to explaining why Cheika – with coaching offers all around the world after his five-year Wallabies stint – is now in Mendoza wearing the sky blue and white of Argentina, preparing to take on Australia on Sunday morning (AEST).

After taking on a consultant’s role with the Pumas in 2020, two years later Cheika agreed (again) to become the Pumas coach.

“I respect what these guys do against the odds. Maybe it is I identify with that underdog status a bit more,” Cheika said.

“I hope I can pay them back for what happened (in 2014) by doing as best as I can here, to help them play the best footy they can, because they have some great footy in them.” 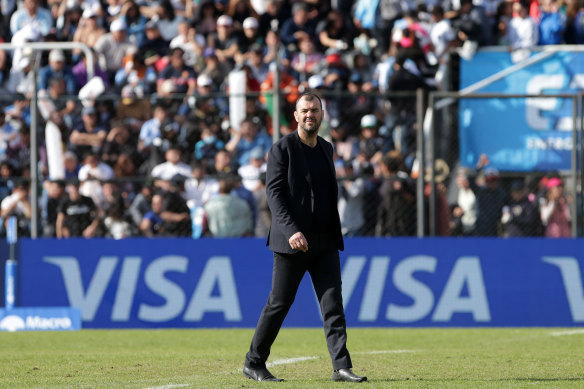 Michael Cheika on the field as Argentina warm up to play Scotland.Credit:Getty

As evidenced by the several rebuild jobs on his CV, Cheika likes a coaching challenge, and the more rough edges the better. Argentina fit the bill in both respects, as an under-resourced nation who have punched well above their weight in Test rugby for decades; defying their country’s round-ball obsession to record wins over every major rugby nation. The All Blacks were the last to fall in 2020 on a memorable afternoon in Parramatta.

Argentina have played at all nine Rugby World Cups and made the play-offs four tines, progressing to the semi-finals twice. In 2007, with a rockstar team that beat England, Ireland, France and Wales in the year prior, they finished third. For context, Ireland are yet to reach a Rugby World Cup semi-final. 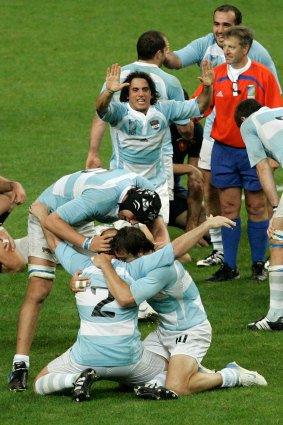 So the allure of being the coach to finally polish the rough Argentina diamond was obviously there for Cheika, and success was achieved in short periods with Leinster, the Waratahs and – early on – the Wallabies. But it was a long-standing appreciation for Argentinian rugby, and its people, that mostly drew him to the job.

“I have liked the Argentinian personality since I first really came into contact with it when I coached Felipe (Contepomi) at Leinster,” Cheika told the Herald in Mendoza.

“I had some experience with Topo Rodriguez and different guys over time, but my first real experience was with those guys. I really had an affinity with the way they saw the game, and the way they were able to mix their on-field and off-field, and have that switch. That on-off switch, back in those days when the game was really different.

“There are three teams from South America in the World Cup next year (Argentina, Uruguay and Chile) and a lot of that is built from Argentina being the bedrock, and having built the game here as well. Gus has always wanted to build the game here.

“That underdog passion has always attracted me to them. And they’re also very good people, very welcoming.”

The rough diamond part is occupying Cheika’s time right now, and the formula for turning the Pumas from world No.9 into World Cup contenders before next year (he is only on a two-year contract) will likely follow what has worked before.

With all the talent in place, Cheika aims to solidify the team’s defence, encourage relentless attacking pressure and “rebirth” the once-intimidating Pumas scrum and maul. As a circuit-breaker, he has introduced a new training system.

But are Argentina’s strengths shaping Cheika’s coaching, or will that Randwick-forged style of Cheika reshape Argentina?

“We will try and sprinkle a bit of that dust around there,” Cheika said. “(Assistant coach) Felipe – obviously I have coached him in the early days and we think very similarly about what’s important in the game. And he has unbelievable experience coaching with one of the best teams in the world in Leinster.

“So that’s brought a slightly different dimension as well around what we are trying to do. But that’s a work-on, that attack, in the background. And it takes time to build that. 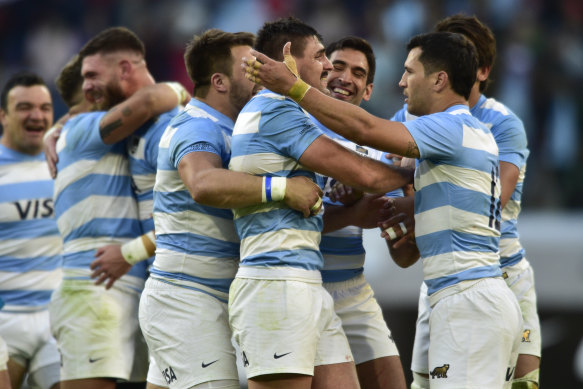 “We will use this year and really bed into players exactly how we like to play, and how we like the team to be seen.”

Having enjoyed the consistency of their players all featuring for the Jaguares in Super Rugby pre-COVID, the pandemic saw Argentina cut adrift from again and all Pumas players are now back in Europe. The Jaguares’ combinations are now missing, and so are the fresh legs. Playing in The Rugby Championship is essentially how Argentina’s stars spend their summer holidays.

“These guys aren’t getting a break, at all. I am always talking with the club coaches in Europe, to try and negotiate it out,” Cheika said.

“But you see it when they come back, how much they love being together. There is a hint of that amateur era here, always. Obviously, they are professional in as much as we can possibly do, considering the resources etc.

‘That underdog passion has always attracted me to them.’

“But that real identification of the team spirit, they’ve had a tough few years, no doubt about it, being on the road, in bubbles, lockdowns, so much crazy stuff. But they still love coming together to play for the Pumas, you know? They love playing for their country, it’s really nice.”

But let’s cut to the chase. Can Argentina shake off some tough years and be a genuine challenger at next year’s World Cup?

“What’s important right now is to start to do things you haven’t done before, to build that positive feeling, that you can achieve,” Cheika says.

“We have to build those steps. Don’t take your goals down off the wall. Keep going towards them.”

Watch every match of The Rugby Championship on the Home of Rugby, Stan Sport. Kicks off this weekend with South Africa v All Blacks (Sunday 12.30am AEST) and Argentina v Wallabies (Sunday 4.45am AEST). All matches streaming ad-free, live and on demand on Stan Sport.