Brad Scott has chosen the AFL over his desire to continue coaching and will help run a new-look AFL football department.

Scott will take up a senior football position at league headquarters, where he will be the face of the football department but ultimately answer to Andrew Dillon.

Former Kangaroos coach Brad Scott is taking up a senior football role with the AFL.Credit:Getty

The league’s long-time head of legal and integrity, Dillon, will continue in those roles but also oversee football as executive general manager of football.

The last time a head of football had integrity as part of portfolio was under the Adrian Anderson regime. Dillon loses game development, which is a role that will go out to market.

Scott will become the general manager of football, which will encompass list management, umpires, match review and rules.

He will work alongside Laura Kane, who has been poached from North Melbourne where she was the boss of club strategy. Kane has been appointed as the general manager of competition management. 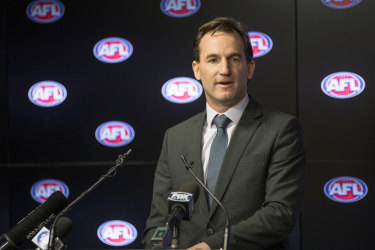 She joined the AFL competition committee in July and is highly regarded among the AFL’s clubs.

Dillon has been filling in as interim football boss since Steve Hocking left last month after being poached by Geelong to be the club’s chief executive officer.

The announcement of Scott’s promotion internally at the AFL is another significant blow to Carlton, who had been interested in hiring Scott to replace David Teague as senior coach.

Scott had been contacted by Blues football boss Brad Lloyd just before former St Kilda and Fremantle coach Ross Lyon pulled out of the process.

Carlton are now likely to focus their attention to Brad’s twin brother Chris, who has one year remaining on his contract at Geelong.

Chris has recently stated that he won’t be taking calls from rival clubs and that his phone will be off for “a while”.

Brad Scott became the head of AFL Victoria in a league restructure last year that directly affected more than 20 per cent of staff.

He took North Melbourne to consecutive preliminary finals in 2014 and 2015 before he and the club parted ways in 2019 following a disagreement about the list.

The AFL is expected to announce the restructure of the football department in the coming days.