State of Origin has always been an event for rugby league tourists, so it was fair enough that its first trip to the regions was to sunny Far North Queensland, the Whitsundays and the Great Barrier Reef.

About two million of the people who watch Origin do not watch the weekly National Rugby League, so most of last night’s audience would be unaware of the day-to-day NRL soap opera around refereeing, high tackles, the six-again rule and sundry off-field stinks. Few would know or care who Peter V’landys is, and fewer still would be aware of this week’s latest drummed-up threat to the game’s very survival.

Nathan Cleary fought a battle against an open wound all first half before helping destroy the Maroons. Credit:Getty

Unstructured football has tended to favour Queensland’s masters of improvisation, Daly Cherry-Evans and Cameron Munster. A few months ago, when these teams last played, it also enabled the Maroons to play smoke and mirrors to conceal their apparent man-for-man inferiority. But in this match, New South Wales beat Queensland at their own game.

Latrell Mitchell and Tom Trbojevic, both playing out of position, showed disregard for any position, taking spectacular risks, popping up out of the blue and razzle-dazzling with their athleticism in setting up the record win.

Mitchell opened with some magical running, carrying the ball in one hand like a toy. Shown the sideline by canny Queensland defenders, he took it. Trbojevic, combining with Mitchell in the centres like Mick Cronin with Steve Rogers, put through a grubber while being tackled to serve up Mitchell’s first try. More old-school support play had Mitchell returning the favour late in the game, Trbojevic taking off for the line like he’d been offered a dare on the Corso at Manly.

Weren’t New South Wales always meant to be the boring, predictable swots of Origin? Not this lot. Jarome Luai and Brian To’o cavorted like they were back representing St Marys Saints. Tariq Sims, employed as a meat-and-potatoes second rower, threw a halfback’s cut-out pass to set up To’o for one of what will be many left-corner tries in a long Origin career. 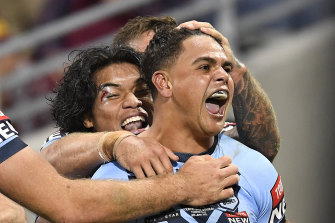 Where was the Blues’ tried-and-not-very-true formula of playing to a structure? Nathan Cleary was reading a play book in the dressing room before the match, but it must have been Shakespeare. Given an open Josh Addo-Carr to send away to finish a movement, Cleary instead chose a switch to James Tedesco, who flick-passed to Trbojevic for the try that brought up the half-century. New South Wales, for once in our lives, were playing off the top of their heads.

At least the top of their heads remained attached to their bodies. There was a minimum of high tackling, and when it did happen, players obeyed the ‘gentlemen’s agreement’ proposed, to much hilarity, by Cherry-Evans during the lead-up to the game. If only they could be gentlemen every week. The concussions that did occur – including a game-changer to Queensland’s prop forward Christian Welch in the 12th minute – were, like the majority of damaging head knocks in this sport, accidental.

For purists, some of the defence from both sides might have been a touch too gentlemanly. Trbojevic’s opposite number, Kurt Capewell, offered an after-you instead of a tackle early in the game, and later in the first half Trbojevic reciprocated with ‘No, sir, after you.’ But defensive errors by fatigued players are also a weekly feature of the NRL, and Origin only reflects this free-wheeling progression.

Progression or regression? It probably depends on whether you are a tourist or a purist.

Sports news, results and expert commentary. Sign up for our sport newsletter.

Related posts:
Previous Post: Scotland looking to give Tartan Army something to cheer on return to big stage
Next Post: Jose Mourinho savages James Corden after questioning him on future plans