Before he was named in Parramatta’s team on Tuesday afternoon, Makahesi Makatoa was so anonymous that the club didn’t even have a headshot of him for its website.

This debut has been a long time coming. At 28, Makatoa will be one of the oldest debutants in the NRL when he comes off the bench against Manly, not far behind the record set by Darren Nicholls, who was 29 when he first pulled on the Red V.

Makatoa was a full-time scaffolder who thought about quitting the game altogether when the COVID-19 pandemic shut down the NSW Cup last year.

“But then he thought ‘I want to give it one more big go’.”

Which is why he turned up in the best shape of his life last pre-season for Parramatta’s feeder team Wentworthville. Given his Magpies contract was worth only about $15,000, he continued to work full-time before the Eels helped him source a carpentry apprenticeship. Even when he joined the full-time squad on a train-and-trial basis, he continued to work on his days off.

Parramatta Eels forward Makahesi Makatoa ahead of his NRL debut at the age of 28.

“That’s the sort of character he is, he’s a worker who doesn’t want to take a shortcut,” long-time coach Ryan Carr said. “He wasn’t with us for the money, he was there for the opportunity.

“It’s nice to see a good player and good person take that opportunity. His willingness to work hard has paid off in the end.”

Carr knows Makatoa better than anyone. They first crossed paths at Canberra, where Carr was coaching the Raiders’ reserve grade side. When Carr got a job in England, coaching the Featherstone Rovers in the second-tier competition, he took the New Zealand product with him. The prop forward was a standout and was offered a full-time contract by Super League club Salford the following season.

But when Carr got a chance to coach at Parramatta, Makatoa came with him.

“He felt he had unfinished business because he wanted to make it in the NRL,” Rogaris said.

“He let that [Salford] opportunity go, which is pretty courageous.”

Makatoa’s debut on Saturday will be his reward for persevering. It’s a journey that began when he left New Zealand for Australia at 19 despite not having a contract or guaranteed employment.

“He came over with a backpack and was living with his uncle at the time,” Rogaris recalled.

Since then, he has worked his way from Bundaberg Cup level with the Kingsgrove Colts, to stints at the Bulldogs, Raiders, Rovers, Magpies and, belatedly, a first-grade start with the Eels. 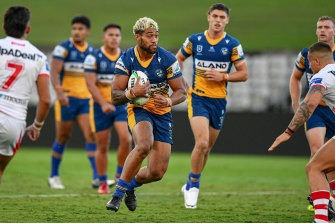 “He’s a late debutant, which is a great reward for his persistence,” Carr said. “He deserves everything he gets because he’s gone the hard way, it hasn’t been easy for him.

“He’s found a way to push through adversity and keep finding a way. Now he’s finally getting a reward for all that hard work.

“He’s got a good footy IQ, which is why we’ve got along so well.

“He’s selfless, will do whatever the team needs, it’s not about him. If it’s rolling his sleeves up and making four tackles back to back, he will do that.

“He doesn’t do it for himself, it’s for what the team needs.”

Makatoa’s more established Eels teammates have no doubt he is up to NRL standard.

“He’s a powerhouse,” Ryan Matterson said. “He’s full of brute strength and aggression and that’s something that we’re focusing on him to bring to the game.

“He’s more experienced than your average person who debuts and we’ve got full confidence in him.”

“He just came up here, put his head down and worked hard,” Eels captain Clint Gutherson said. “I’m sure however many minutes he gets, he’ll have a red-hot crack.

“It gives all those kids and people on the fringe another view that you can make it if you keep working hard. He was working, coming into training every day, training in the arvos and working all day until …he came up here and joined the full-time squad.

“Now he gets his crack. I’m pretty excited for him as a player and us as a group to reward him.”