Cardiff: The ground announcer at Principality Stadium mispronounced Mark Nawaqanitawase’s surname minutes before the Wallabies ran out for their final spring tour match against Wales on the weekend.

It’s not the first time someone has butchered Nawaqanitawase’s seven-syllable surname.

But by next year’s Rugby World Cup in France, Nawaqanitawase could very well be a name on everyone’s lips.

His outstanding three-Test stint on the spring tour, having not even been in the Waratahs’ best team at the beginning of the year, has him firmly in the picture for a Wallabies jersey at the World Cup.

Australian rugby loves a World Cup bolter and Nawaqanitawase, who hails from the Eastwood club in Sydney, could be the player to follow closely.

The Waratahs youngster was busy on debut against Italy, despite the match being remembered for all the wrong reasons, and he was arguably Australia’s best player in a 13-10 loss to Ireland.

But two tries in the space of 10 minutes against Wales, in a match where he made 77 metres and beat eight defenders, left no one in doubt of his raw talent in a 39-34 victory that has eased pressure on the Wallabies heading into an extremely important year.

Three years ago, around the time he was in the Junior Wallabies set-up, astute judges were comparing Nawaqanitawase to Israel Folau.

While Nawaqanitawase, 22, is not buying the hype, he has made major gains in the gym. It’s helped his defence, which was very suspect in Super Rugby seasons gone by.

When asked if he was surprised by his sensational debut international season, he replied: “I know what I can do. I’m just lucky I have people who can help me express myself and put myself in the right positions to make me play the way I do.

“They say to us you’re playing the best in the world. There’s no reason why I can’t show them why I should be there. There’s definitely … confidence I can go out there and prove everyone wrong.

“Mate, I’m lost for words. I’m still trying to get used to it. I guess once I get back home, I’ll sit back and look at it. I’m speechless. I don’t even know what to say or think about it. It’s been a crazy, crazy year.”

When Wales face the Wallabies at the World Cup in September, far more fans in red will be able to sound out his surname (Nah-WANG-gah-KNEE-tah-WAH-zay).

A humble young man with Fijian heritage, Nawaqanitawase lives with his grandparents in Sydney.

They were in the stands in Cardiff, overcome with emotion while watching their grandson help orchestrate a famous Wallabies win.

But like many others maternal figures, Nawaqanitawase’s grandmother was more worried about something else than Australia’s 21-point deficit midway through the second half.

“My grandmother is not one [who likes] the physical game. She’s more glad I made it out safely,” Nawaqanitawase said. 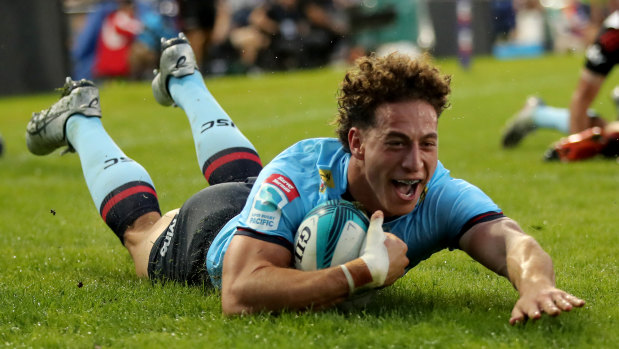 “I’m a bit of a family man. I’ve got a close relationship with them, so it’s very special to have them here witness that.

“My grandparents were shedding a few tears there. It was a special moment. I’m just happy I can keep them happy. To see that makes me want to keep doing it.”

Considering he wasn’t picked by the Waratahs for pre-season matches, he’s come a long way.

He’s a lock to line up for NSW in their Super Rugby opener against the Brumbies at Allianz Stadium on February 24.

As for a maiden World Cup campaign, there will be a lot of buzz about Nawaqanitawase in the new year.

He’s just taking it all in his stride.

“I’m just excited to get back home and have a bit of a rest. I guess that kind of stuff [World Cup discussion] comes next year once Super comes around. I’m just looking forward to getting home and getting a break.”