The movie we have all seen too many times is about to be screened at Suncorp Stadium on Sunday night: the shock Queensland victory, against all odds, against a gun NSW team featuring the best player in the world — Trbojevic, Cleary, Tedesco, take your pick — forcing the game into a decider in Sydney.

Exhausted Maroons players look on after a Blues try during game one of the 2021 State of Origin.Credit:Getty

Every NSW supporter has seen this movie before, in some form. So has Brad Fittler, who saw it last November when he lost his first series since becoming coach in 2018.

The Blues bounced back from their game-one loss in Adelaide with a 34-10 thumping in Sydney off the back of a Nathan Cleary masterclass.

Still, in the dressing-room afterwards, the Blues looked spent, emotionally and physically, after investing everything into keeping the series alive.

“We’d lost three players after game one,” Fittler recalls. “Boyd Cordner and Cameron Murray were injured and Luke Keary wasn’t considered either. Our blokes were bouncing off some heavy criticism from game one, too.”

On the other side of the tunnel, Maroons coach Wayne Bennett was laughing with his players.

“In Origin, sometimes the hardest thing to deal with is winning,” Fittler says. “Queensland seems to roll on better. Especially last year when you could see it in their rooms after game two: one-all, let’s go. I took a bit out of Wayne laughing. It’s another message not to panic. Where there’s life, there’s life.”

Bennett’s side won the decider at Suncorp. For Blues fans, it was the greatest flop since Godfather III.

The scar tissue remains for the Blues, especially with the coach. It explains why he downplayed the 50-6 win in Townsville; why he turfed the media from the rooms after just 15 minutes. 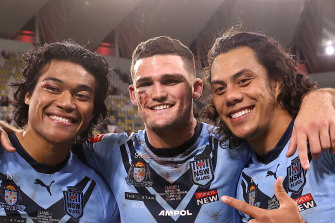 According to rugby league’s statistical guru, David Middleton, the Blues have won the first match of the series, but lost the second, nine times in the past 40 years. Seven of those have been in Brisbane.

It’s easy to get amnesia in this funny old game but take your thoughts back, if you can, to game two at Suncorp in 2006. It will explain why Fittler is being ultra-vigilant about complacency.

The Blues had won 17-16 in the series opener in Sydney, thanks to fifth-choice halfback Brett Finch kicking a late field goal.

It was the narrowest of wins but still — still! — the Blues were overwhelming favourites when they headed to Brisbane to clinch the series.

Captain Darren Lockyer needed to be moved on. This was the worst Queensland side in history, especially if they’re picking Adam Mogg on the wing. And then, of course, the obligatory question: “Is Origin dying? Is it dead? If you can hear me, Origin, squeeze my hand.” 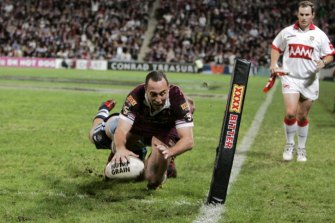 Adam Mogg scores for Queensland during game two of the 2006 State of Origin series at Suncorp Stadium.Credit:Craig Golding

So, yes, we’ve all seen this movie before. The build-up to game two is already like game one: quiet. A little too quiet. This is the part of the movie when the hero gets his head blown off.

Doubtless, Fittler will be aware of the influence referee Gerard Sutton will play. At Suncorp last year, the Maroons stood offside for most of the night. In Townsville earlier this month, NSW lost the set restarts 5-1.

The Blues still won by 44 points, such was their dominance on the fast surface, although Fittler dismisses the scoreline.

“They’ve never kept for-and-against in Origin,” he says. “It doesn’t count. So, we need to get over it quick.”

Related posts:
Previous Post: English prevails in 8-hole playoff to win Travelers
Next Post: Why Paul Pogba is so much better for France than for Manchester United