They’ve been the laughingstock of the NRL for the past few seasons. Now the Bulldogs are on the verge of securing a stunning double coup with the club in talks to expand legendary All Blacks coach Steve Hansen’s involvement.

On the back of securing the services of Phil Gould as general manager of football, the Bulldogs have now turned their attention to extending and expanding Hansen’s role at Belmore.

Power couple: Phil Gould and Steve Hansen are on the verge of forming an alliance that will be the envy of all rugby league and union clubs.Credit:Sydney Morning Herald

Gould and Hansen, who spent time together at a Bulldogs business luncheon last month, are two of the most influential figures in each of the rugby codes.

They are now on the verge of uniting to create the most powerful and revered duo of all rugby league and union clubs on the planet.

Hansen, who visited the club on a 10-day hit-and-run mission as part of his role as the club's high performance consultant last month, is off contract at the end of October.

Bulldogs chief executive Aaron Warburton is in the process of extending that deal, however the club wants Hansen to have a more significant role to play in the day-to-day operations. 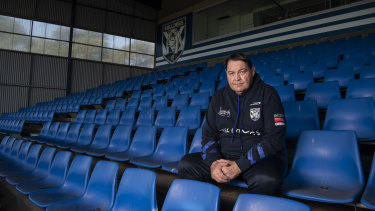 Former All Blacks coach Steve Hansen has been working with Trent Barrett and the Bulldogs.Credit:Louise Kennerley

"Like any new leader in an organisation, the advice is to surround yourself with good people," Warburton told the Herald on Sunday.

"With Phil and Steve at the club, we are surrounding ourselves with the best. It creates an environment for Trent [Barrett] to do what he is good at, and that's coach rugby league.

"We are in the process of discussing Steve's future with the club and what that looks like, however it became clear to us during his time here that we can all benefit as an organisation from having him around as much as possible."

The Bulldogs were once the most powerful clubs in the league. The acquisitions of Gould and Hansen will go a long way to them returning to the top.

In an exclusive interview with the Herald last month, Hansen was adamant he saw light at the end of the tunnel for long-suffering Canterbury fans as a recent culture of mediocrity begins to shift towards a philosophy of accountability.

“There’s only two types of culture: there’s either a good one or a bad one,” Hansen said.

“The good one is the result of the same thing: either living the values you set out as a group or not living them. And living them from the top down, not the bottom up. Then when you say what you want to do, you have to go out and live it every day.

Is halfback Luke Brooks on his way out of the Wests Tigers? The Herald can reveal club officials have made recent enquiries with rival clubs to gauge interest in Brooks' services for next year.

Sunday’s performance from Adam Doueihi in his return to the five-eighth role has made it clear where his best position is, racking up five try assists in the win over Brisbane. It will leave Brooks and new recruit Jackson Hastings in a battle for the No.7 jersey next year. 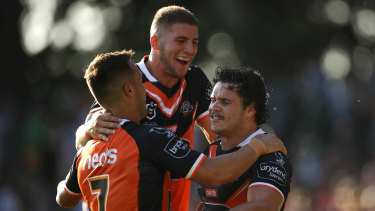 At least one of these three players (Luke Brooks, Adam Doueihi and James Roberts) won’t be at the Wests Tigers next year.Credit:Getty

James Roberts may have also played his last game for the club. It remains unclear whether the Tigers will call him into the bubble after he was forced to remain home to wait for a COVID-19 test result after attending a hot spot.

It comes after the decision to leave Joseph Leilua behind when the Tigers headed north. The joint venture outfit have failed to take up club options for both players for next year.

Show us the money: NRL

Don't be surprised to see the NRL go to market in search of the highest bidder when it comes to location of this year's grand final. While most assume the grand final will be played at Suncorp Stadium if crowds aren't allowed in Sydney by the time October 3 rolls around, don't discount Melbourne. 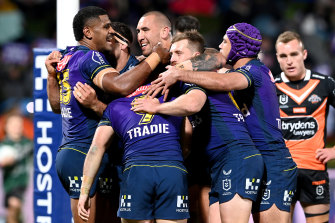 A home grand final would be a fitting reward for the wildly successful Melbourne Storm.Credit:Getty

It will be a shock to most if the red-hot Storm fail to make another grand final, and given their sacrifices over the past 12 months and the success of the club over the past two decades, it would be fitting for them to get the chance to play a decider on home soil.

Suncorp Stadium is limited to 52,000 fans and you can’t imagine one of the three Queensland teams getting close. A grand final at the Melbourne Cricket Ground could provide the NRL the opportunity to attract 80,000 plus fans and make some money back to cover the costs of Operation Relocation, which will set the code back about $12-15 million a month.

The AFL grand final is played the week before the NRL this year, giving rugby league clear air if they are able to take the decider south of the border.

Tim Sheens' plans to return to Australia have once again been put on hold. Sheens was originally meant to fly back home from England at the start of the month, which was later delayed until July 16.

The date has now come and gone, with Tigers officials hopeful he will arrive by the end of the month. He also has to do two weeks’ quarantine, limiting any meaningful involvement for some time.

The club's senior figures wanted Sheens to run his eye over the football operations, however that won't be happening in great depth given the NRL side is now in the bubble in Brisbane.

Hats off to Sam Thaiday and Darren Lockyer for going over and above to provide Wests Tigers debutants Junior Pauga and Tuki Simpkins a little something to remember their first game by. The Wests Tigers do not have a media person in the NRL bubble, so Thaiday and Lockyer happily offered to interview the pair after the game as part of their role with Channel Nine. The gesture was particularly appreciated given the Tigers’ victory came against their old club in Brisbane.

There were a number of records that tumbled throughout this year’s Origin series, but probably none were more reflective of NSW’s dominance than the aggregate series margin.

The previous biggest margin between the two teams over a three-game series was set by the Blues in 2000 when they swept the Maroons by a combined 62 points.

Despite losing game three 20-18 last week, the Blues still managed to win the three games by an aggregate difference of 68 points.

To put that in perspective, the best the Maroons could manage throughout their eight-year dynasty was 37 points in the 2010 series.