Port Adelaide will finish top two and the Western Bulldogs are likely to finish outside the top four after the ever-reliable Robbie Gray gave Port the lead for the first time with less than five minutes remaining as they kicked three unanswered goals to snatch victory.

A long shot from the Bulldogs’ Bailey Smith fell just short and was rushed through for a behind with seconds remaining to give Port the win by two points.

The result means Port will enjoy a home qualifying final for the second consecutive season but may be without young tall Mitch Georgiades who hurt his hamstring.

Meanwhile the Bulldogs are relying on West Coast upsetting Brisbane at the Gabba to stay in the top four having had the double chance sewn up before they dropped the final three matches.

The game was a classic as the Western Bulldogs went into the game with renewed tension surrounding their season having spent between round three and round 21 either first or second but they could not hold on despite leading by 15 points midway through the last quarter.

Suddenly the Bulldogs had to defeat Port Adelaide to make the top four against a team that had abruptly towered over them both in the height department and on the ladder.

Both coaches knew their team’s strengths and weaknesses and they went all chips in on them. Ken Hinkley, often the bridesmaid but an outstanding coach, played four talls inside 50 and dared the undersized Bulldogs to bring the ball to ground. 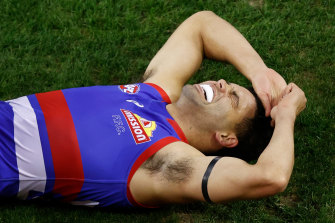 Luke Beveridge, the premiership coach, who embraces the unorthodox, planted his tallest player Tim English forward and threw the inexperienced Lewis Young the challenge of matching it with Port’s Scott Lycett.

He then exhorted his team to be relentless in everything they did whether the ball was above their outstretched fingertips or bobbling around the ground.

For the first 15 minutes the Bulldogs way appeared as though it would prevail as they jumped Port Adelaide kicking the first four goals of the match. Their pressure rating was 239 points as they attacked the game with a finals-like intensity while Port Adelaide – with their top four spot already won – appeared less desperate.

But this was never going to be an easy win with the Bulldogs’ deficiences more pronounced than Port Adelaide and Port began to work their way back into the contest slowly but surely.

Lycett began to realise that Young, Mitch Hannan and Marcus Bontempelli were not big enough concerns and he opened his arms like a batsman who realises he has a medium pacer’s measure.

The ball kept going Port’s way, but they could only manage one goal in the first half and were 19 points behind at half-time. But they had the game on their terms and entered the second half on the attack kicking the first three goals of the half to level the scores midway through the third quarter.

At that point it appeared as though Port were going to go away with the game but a moment of inspiration arrived through Cody Weightman who played five minutes of football that was reminiscent of Stuart Dew’s cameo in the third quarter of 2008 grand final, albeit for a lesser prize.

He kicked a goal then found English inside 50 before handballing to Latham Vandermeer in the goalsquare and the lead was again three goals. It was inspirational from Weightman who has proved his worth more than once this season.

Port kept coming but they could never put their nose in front, with Adam Treloar kicking the first goal of the final quarter after taking a nice mark but they stopped running and Port began to find the goals.

Ollie Wines started the run with a brilliant banana goal then Boak before Gray got the job done with Port winning 11 of their final 13 games compared to the Bulldogs who have fallen in a hole in the back half of the season winning just six of their final 12.

If results go to plan they will meet Essendon in the elimination final with Beveridge’s teams never winning the double chance during his reign while Port are likely to play the loser of Melbourne and Geelong.