To be at Ash Johnson’s first AFL game, his family drove 10 hours – and that was just to get to Darwin airport.

Johnson’s journey was even longer. It took him seven years, through seven clubs in three states. Halls Creek is in all respects far from the beaten path.

Johnson’s school days were divided between Halls Creek and Kununurra, 350 kilometres up the road. Halls Creek footy club stalwart Clinton Cox has no explicit memories of him at that age because the club has no juniors, and he did not stand out then anyway.

“All the fellas here like doing speccies,” Cox said. “In the backyard, they take turns jumping on one another’s back. He was like the rest of them, raw, just happy to be playing footy.”

Cox has lived in Halls Creek all his life, bar a year in Darwin and a brief stint playing for East Perth. At nearly 44, he was to turn out for the Hawks in Saturday’s East Kimberleys grand final. But his vocation is to improve the locals’ lot.

“My big thing with the boys is to educate them first,” he said. “When I was coaching the [Halls Creek] Hawks, I had rules: Go to school, respect your teachers, finish your work before the end of the week, rock up to training and you’ll get a game.” 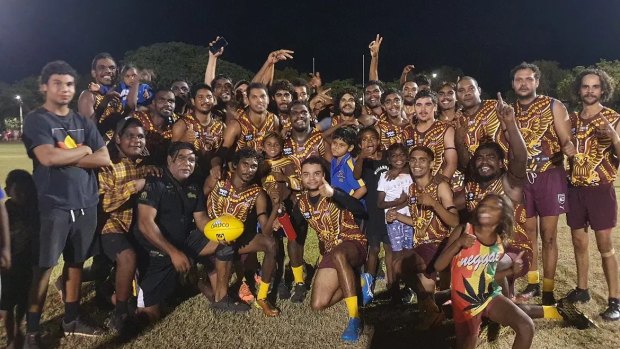 The East Kimberleys are zoned to Claremont in the WAFL. Johnson and his cousin Sam Petrevski-Seton spent parts of two seasons playing Colts there while Johnson’s three-years older-brother, Shane McAdam, played seniors.

“It doesn’t come without its challenges, coming from a tiny remote community to Perth – the big smoke!” said Claremont CEO Darcy Coffey. “He was almost horizontal, he was that laid back. 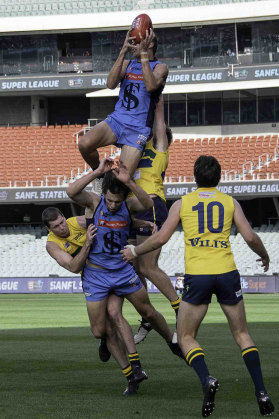 “You didn’t get much out of him. He’d roll in, do something miraculous, stand on someone’s head and we’d go: wow. Next minute, he’s gone.

“They were so talented. You always felt that if you could get them going, they could be anything. That’s how it’s turned out.”

Petrevski-Seton was drafted to Carlton and Johnson returned to Halls Creek. Cox saw that he had changed. “You could see the improvement,” he said. “He was taller, bigger, more athletic.” In the cacophony of team talks, he listened, intent on learning.

But still the call did not come. So he, McAdam and another cousin, Jy Farrar, took up an offer made through a connection of Farrar’s to play for North Wangaratta in the Ovens and King league. McAdam stayed only briefly, but Johnson and Farrar stuck out a cold, bleak, winless season, fighting homesickness all the way. “He was very shy to begin, but once he went onto that football field, it was very different,” said then teammate, now president Alan Ely. “He loved the show. All I remember from him, every game, was his grabs. He just took screamers everywhere. He was a little bit showboaty, but he could back it up.

“I honestly thought he would have made it before Jy.” 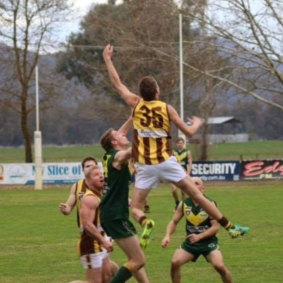 Next stop for the pair, following in McAdam’s footsteps and facilitated by former Essendon and Sturt player Shane Radbone, was Scotch Old Collegians, an Adelaide amateurs third division club.

“He was in his shell a bit at the start,” said Andrew Camens, who played alongside him and is now president. “I remember his first day of pre-season, rocking up in his baggy basketball shorts, right at the back of the pack.”

He was not so much distant as cold. His first game was played in sheeting hail. But soon, they were hailing him. “He was a naturally talented footballer. That was obvious from the start,” Camens said. “Once he got fit, the sky was clearly the limit.” Sky, literally. “He certainly has the family genes there,” Camens said. “He loves the big marks.”

Collegians won the premiership, but in the grand final, Johnson suffered a compound fracture of his arm when falling from a great height. “He was carted off to hospital, got his medal delivered to him in the hospital bed,” Camens said. Glinting against the hospital gown, he can see it in his mind’s eye still.

That year, McAdam was drafted to the Crows and the next year, Farrar was taken by Gold Coast. Camens and others just about heard the penny drop. “I think it was really only Ash’s drive that was holding him back,” he said. “Once he saw what Shane and Jy were able to do, I think he thought, I can do it as well. He knew full well that he had it in himself.” 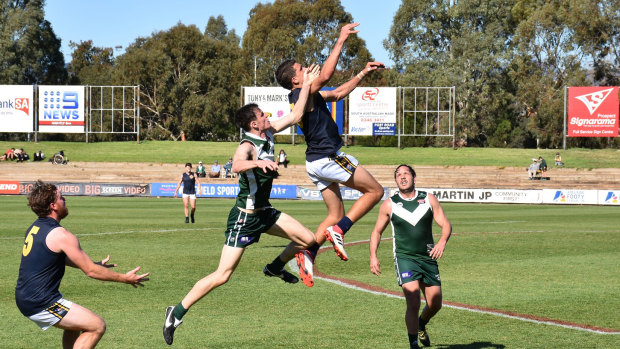 Ash Johnson in action for Scotch Old Collegians in Adelaide in the 2018 grand final.

The next year, Johnson became a Crows’ top-up player, but was still recuperating from injury and did not play a game. A year later, again tracking McAdam, he joined Sturt.

At a pre-season barbecue CEO Sue Dewing and her husband hosted for new players, she was charmed. “He was not a city boy, that was quite apparent,” she said. “But his manners were impeccable. We still talk about how polite he was. He’s just so gracious about everything. He would turn up at the club just to say hello. He was just a delight.”

He delighted on the field, too. He had a crowd now, 3000 sometimes, and his high marking and goal-kicking aptitude began to register more widely.

Collingwood was watching. “You could certainly see the scope as far as the way he jumped at the ball and his aerial prowess,” recruiting manager Derek Hine told the Road to the Draft podcast. “I wouldn’t say he was an aerobic animal, but he’s really improved that phase. I’d be lying if I said he wasn’t one of my favourites.” 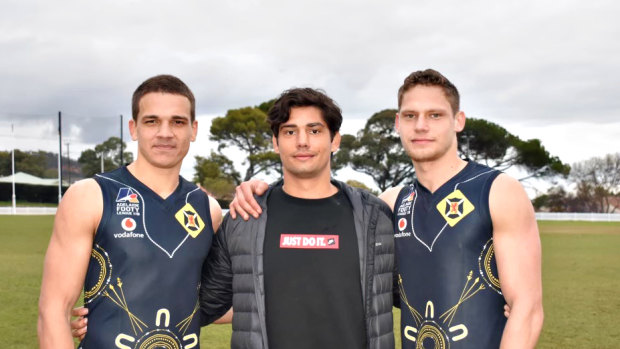 Johnson and McAdam were sharing a house and were watching TV and tucking into a steak dinner together when the Magpies took Johnson at No.3 in the 2021 mid-season draft.

McAdam was as rapt as Johnson. “I’m very proud of him, especially because I know about the challenges with his upbringing, to see where he is now and killing it is awesome,” he said. “Last year he really put his head down in pre-season, trained with me a bit in the off-season, got fit and never looked back. 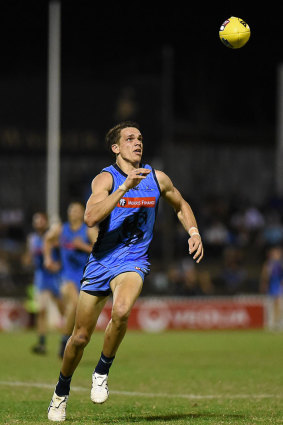 Ash Johnson in action for Sturt in 2021.

“We’re very similar players. He’s a better key forward, he’s got height and hops and his hands are twice the size of mine. He has good dukes, whereas I play a bit smaller.”

A finger injury last year and a hamstring strain at the start of this season slowed Johnson’s progress, but did not dampen his resolve and did not deter the Magpies, who extended his contract.

Johnson’s opening came against Adelaide and as luck would have it, McAdam. Instead of 3000, there were now 30,000 at the Adelaide Oval. “That whole first quarter, I was just looking around at the crowd and trying to let it sink in,” he told Collingwood’s website.

His two goals were crucial in Collingwood’s narrow (what else?) win. “I can’t feel anything, to be honest,” he said afterwards. “It happened. It doesn’t feel like it … ”

Johnson has taken his chance with both of what everyone notes are outsized hands. In them, the ball lands like a butterfly. Four goals against Melbourne, including two in the last quarter clutch, made him an instant fan favourite. He kicks at goal in front of 70,000 as nervelessly if it was a couple of hundred at Halls Creek. 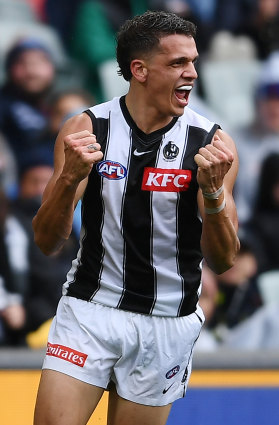 Ash Johnson celebrates after kicking a goal on his AFL debut against Adelaide.Credit:Getty Images

It’s not just the 70,000. It’s Collingwood. “We’re proud when anyone from our club gets their chance in the AFL,” said Sturt’s Dewing. “But I see so much more on our socials about Ash. Everyone is just so pleased for him.”

The shiver runs all the way through the red centre to Halls Creek. “He’s kind of crept up on everyone,” said Clinton Cox. “The other fellas, you knew they wanted to get to the AFL. Little Ash, he played footy for the love of it. Later on, he thought, I can make a career out of it. Playing now, he’s unbelievable. Is this the same fella we had here?

Johnson is sharing a house with Collingwood ruckman Darcy Cameron, a former school and Claremont clubmate of McAdam. “We’re going well. It feels like a family,” he said. “It is a family.” He and McAdam are in almost daily contact. “I talk to him regularly,” said McAdam. “He’s loving it and playing good footy.”

Johnson is far from where it all began, but only geographically. He was back in Halls Creek late last year after nearly two COVID-closeted years away.

With him were Petrevski-Seton and Farrar. They were there at the bidding of their grandmother Joan Wilson, a Bunuba and Kija woman and for 30 years an Aboriginal health worker in the Kimberleys. Amid fears that COVID would take a devastating local toll, they were promoting a vax-a-thon. It appears to have worked.

Halls Creek is a crossroad in the red earth 500 kilometres inland from Broome, population 1500 give or take. Now it rejoices in a new epithet: the football factory. Eight Halls Creek Hawks men are or have recently been on the books of AFL clubs, and AFLW player Krstel Petrevski makes it nine. Talk about productivity.

Clinton Cox has plans to consolidate and build on this pool of talent, but in the meantime, he and the rest of the Halls Creek community and diaspora are wrestling with a strange and disorienting emotion. “Put it this way: it’s the first time I’ve ever jumped up and down for Collingwood,” he said. “I’m a West Coast supporter!”