Melbourne has recorded the most dominant win of their premiership defence with a 67-point thrashing of the Giants at the MCG on Saturday night.

The Demons started well and were electric after half-time, with a 10 goal third term breaking the match open and sapping the spirit of the struggling Giants.

After trouncing Port Adelaide last Thursday, Melbourne again proved far too good for a fellow 2021 finalist to maintain their unbeaten record this year. They played with the free-flowing potency they displayed last September in Western Australia when kicking more than 100 points for the first time this year.

The Demons will be chasing their 13th win in succession, a streak dating back to round 20 last year, when they face Richmond next Sunday night at the MCG. 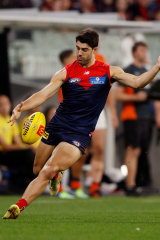 Semi-finalists last season, the Giants are reeling in 14th with just one win to date, but will be hoping the return of Toby Greene from suspension bolsters them against the Saints next Friday.

NEVER GIVE A CHAMPION AN EVEN BREAK

The Demons have not been perfect this year. But they have been flawless when it comes to jumping their rivals, having led at quarter-time in all five wins in 2022.

Their ability to stifle their opposition from the opening bounce is exceptional, as shown in the past three weeks when holding Essendon, Port Adelaide and now the Giants goalless in the first term.

The scoreboard suggests the Giants had plenty of opportunities in the opening quarter. But only Tom Green had a set shot, which was taken from outside 50m, and the other behinds were either rushed or half-chances that failed to come to fruition.

The Giants’ hopes of mirroring their round 16 triumph over Melbourne at the MCG last year were greatly diminished by quarter-time as they trailed by 19 points.

The precision of Melbourne’s kicking enabled them to regularly penetrate the Giants’ defensive zone, even though their rivals more than doubled their entries into the attacking arc.

Melbourne’s first three goals illustrated this, with star Demon Christian Petracca kicking the opening goal from the goal square without any pressure.

Kysaiah Pickett was also able to find plenty of space to mark when kicking Melbourne’s next two goals as they opened up a strong early lead. 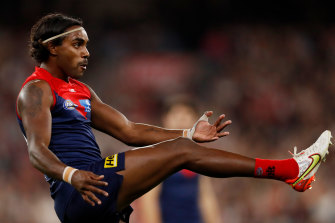 HOGAN BREAKS HIS DUCK AGAINST THE DEMONS

Jesse Hogan was once the next great hope of Melbourne’s forward line and booted 152 goals in 71 games before heading home to Perth at the end of 2018.

In his two previous outings against Melbourne, one with Fremantle in 2019 and the other for the Giants last year, Hogan endured a miserable time when gathering just three kicks. Melbourne’s miserly defence, led by Steven May and Jake Lever, scarcely shaped as a welcoming partnership for Hogan to break his goal kicking duck against his first club. 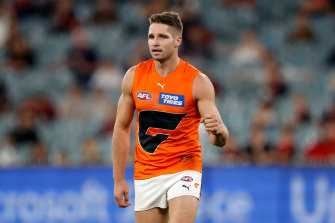 But when he broke through with just under one minute remaining in the first half to reduce the margin to 14 points, the Giants seemed a hope.

At that stage, the prolific Josh Kelly and Callan Ward were providing plenty of drive in the middle and the Giants were being rewarded for their resilience.

FEROCIOUS IN THE PREMIERSHIP QUARTER

Renowned as fast starters, the Demons are proving just as deadly in third terms this season and broke the game open with a stunning burst.

Melbourne kicked four goals in five minutes from the 11-minute mark, a spurt started when Pickett was able to find space again to kick his third for the night.

Captain Max Gawn kicked his second and is clearly relishing the opportunity to spend more time in attack as Luke Jackson emerges as a force.

But the effort of Giants ruckman Matt Flynn against the Demons double-act should be acknowledged, for he battled manfully and did manage a goal against a torrent which continued in the last term.