Think of all the individual battles over Magic Round, and maybe there isn’t one as intriguing as the two No.7s going at it: Manly’s Daly Cherry-Evans and Brisbane’s Adam Reynolds.

The pair have been in blistering form over the last month, and Reynolds came back to haunt his old club, South Sydney, last week.

I’m expecting this game to feature the best kicking games all weekend, and I wouldn’t be surprised if Cherry-Evans and Reynolds both decide early kicks on the fourth, or maybe even third, tackle is the way to go given the prevailing conditions.

Knights clinging to lead against Bulldogs

The Sea Eagles-Broncos clash is the second game of the weekend, and we’re watching closely how this Suncorp Stadium surface holds up under the immense traffic.

The Bulldogs-Knights game, a clash between the two bottom-placed teams, is into the final stages and Newcastle is clinging to a 10-6 lead inside the final 10 minutes.

To say it hasn’t been a classic would be an understatement. Can Adam O’Brien’s side snap this seven-game losing run?

Welcome to Magic Round

It’s here, one of the best weekends on the NRL calendar when the rugby league world flocks to Brisbane for the three-day football extravaganza. Magic Round.

Lucky for the fans who have travelled interstate, Queensland is living up to its motto: beautiful one day, ugly the next. It pretty much hasn’t stopped raining all day in Brisbane, but thankfully the forecast is a little clearer for the weekend.

We’ll be taking you through the second of the Friday night doubleheader when Manly host the Broncos. Yes, the Sea Eagles will be the home team at Suncorp Stadium.

It should be a belter. 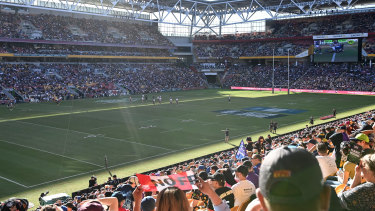 All 16 teams will be in Brisbane for Magic Round.Credit:NRL Photos