Follow all the action from Friday’s Sydney-Hawthorn Lions clash with our live blog from 7.30pm

Sometimes in footy there are offers you simply can’t refuse.

No one can begrudge a player setting themselves up for life with the security of a substantial long-term contract.

Harry McKay has starred for the Blues this season.Credit:Getty Images

The mega-deal that landed Gary Ablett on the Gold Coast, and the multi-million-dollar deals that got Tom Scully and Callan Ward to GWS are just a few examples.

As we’ve seen at clubs such as Richmond, Geelong and Hawthorn in recent years, the lure of premiership success can ensure players will accept less than what they can get on the open market.

But, at the same time, money talks.

It’s why North Melbourne should launch a “godfather” offer at Carlton’s Harry McKay.

While the Blues maintain they’re not facing a salary cap squeeze, the deals they’ve done recently with Zac Williams and Adam Saad, and Mitch McGovern before them, make you wonder how tight their cap is.

If you’re McKay’s manager, you are using those deals as a starting point in any negotiations.

Despite reports Patrick Cripps has committed to Carlton, the skipper is yet to sign on the dotted line. Then there’s Sam Walsh, who will command a significant pay rise when he negotiates a new deal next year.

Are the Blues stretched enough that they’d struggle to match a big offer from the Kangaroos for McKay? For argument’s sake, let’s say the Blues can offer him $800,000 a season.

If North put $1 million-plus on the table over five years, McKay, at the very least, will have some thinking to do. Even $1.2 million-plus is not out of the question.

As soon as the gap between what he’d get at Carlton versus what he’d get elsewhere is more than a million dollars over a five-year period, it can’t be dismissed simply on loyalty.

We’ve seen the Roos chase a number of big names without luck in recent years, most notably Dustin Martin and Josh Kelly.

But with those two the circumstances were very different, because of the outlook at their respective clubs.

When the Roos went after Dusty, Richmond were in the middle of that incredible drought-breaking premiership campaign in 2017. The Giants were also a finals team when the Roos came knocking for Kelly.

Is this North Melbourne’s best chance to finally snare that big fish they’ve been chasing?

Crucially, in the past week, the Roos secured the signature of McKay’s brother Ben, who is emerging as a fine player in his own right, in defence. 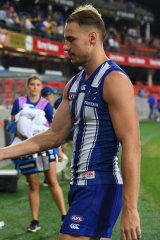 Harry’s brother Ben McKay is a defender at North.Credit:Getty Images

Don’t underestimate the lure of family.

While money is clearly a factor, the Roos can pitch pairing the McKay brothers at Arden Street and I assume Ben is already in Harry’s ear.

There’s also the situation unfolding at Carlton, with the club undergoing a review of the football department after an underwhelming first half of the 2021 campaign.

Not for a second am I suggesting North Melbourne are in a better position.

But could another year without finals, and the uncertainty over the coaching group at Princes Park, be a factor in Harry McKay’s thinking?

His signature – for Carlton or North – would be huge for what it signals to the rest of the competition. Having him locked in long-term makes any club more attractive as a destination.

It’s why, for the Roos, going hard for McKay really is a no-brainer.

Yes, they’ll have to pay him overs to a degree, because in the era of free agency clubs have paid as much for potential as they do proven performance.

But while I don’t believe McKay is anywhere near his ceiling as a player, he’s still leading the Coleman Medal and it’s not just his goals that have been impressive.

When he aggravated a shoulder injury against Melbourne, it looked like McKay could be done for the afternoon.

But he fought through the pain barrier and showed a real maturity to his game by continuing to provide a contest. That’s the type of player you want at your club.

I would have liked to see him fly the flag a bit more for Walsh when he was struck by Kyle Hartigan, but that will come in time.

His baseline performance is now much higher than it once was. McKay can be well held, but still kick his two or three goals.

The Roos need reinforcements right across the ground, but after trading Ben Brown to Melbourne and choosing a midfielder with their first pick in last year’s draft, it’s clear they particularly need more support for Nick Larkey and Cam Zurhaar in that forward line.

The best part about chasing McKay is the fact they wouldn’t have to mortgage their draft position to do it.

Clearly, the Roos won’t be the only team making enquiries about Harry, but if they can pull it off, it would set the club up for the next decade.