For a man about to become only the sixth Carlton footballer to play 300 matches, it’s sobering to think that Marc Murphy’s career will finish this weekend without a premiership and with just six finals to his credit.

It hasn’t been his fault, for it was Murphy’s lot to come along as the No.1 priority pick in time for the 2005 national draft, when the Blues were well on their way to the worst two-decade stretch in the club’s history.

As is still the case at Princes Park, the politics and drama run deep, and the hard-running midfielder who loved to snap a goal would have a good book in him should he ever want to pen the true tale.

Murphy, 34, has been eased as the medical sub to his milestone match against the Power in Adelaide, and did not take to the field in the stinging loss to the Gold Coast Suns on Saturday. He was dropped for the first time in his career earlier this season – but that is just a blip on his journey and what he has meant to the club.

A two-time best and fairest, All Australian and AFL Coaches Association player of the year, he had opportunities to leave – the Cats were among several clubs on the radar in 2019 – but Murphy had faith the Blues were on the rise. The words of his father and AFL Hall of Famer John, who said he had wished he was a one-club player (214 matches with Fitzroy) before stints with South Melbourne and North Melbourne, also meant Murphy never really entertained leaving.

It shouldn’t be forgotten he could also have joined the Brisbane Lions in 2005 as a father-son but the then Oakleigh Charger was keen to remain in Melbourne. The Blues, having finished last, pounced. He was taken ahead of Dale Thomas (Collingwood), Xavier Ellis (Hawthorn), Josh Kennedy (Carlton) and Scott Pendlebury (Collingwood). As chance would have it, those four went on to taste the ultimate success, Kennedy with West Coast. 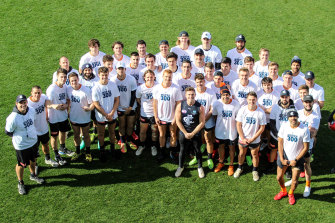 Murphy said his fondest memories were of playing in winning finals at the MCG, against Essendon in 2011 (Murphy had 37 disposals) and Richmond (26 disposals) two years later. In the ’11 campaign, the Blues lost by three points to the Eagles in Perth a week later, perhaps Murphy’s best shot at a flag.

Where coaching stability was long the mantra at Collingwood and Hawthorn, Murphy has played under six permanent or interim coaches, beginning with Denis Pagan. Brett Ratten’s departure after five full seasons in 2012, when he was replaced by Mick Malthouse, is still questionable. Murphy said his best football was under Ratten.

“I think we had a bit of bad luck with injuries over that period from 2012. You can’t get that back – we were building quite nicely but we decided to take a different path and, unfortunately, that didn’t quite work out for us,” he said.

Club legend Stephen Kernahan, the president at the time of Ratten’s departure, and fellow great Steve Silvagni have been among the well-wishers calling Murphy recently and congratulating him on being a one-club player.

He captained the club from 2013-18. He quietly set the standards at training, fronted the media when the wins weren’t as forthcoming as hoped, and was a clean-cut frontman for club sponsors.

This year has not gone to plan for the Blues, Murphy said, but he maintains the rebuild of recent years will soon deliver success once “the weight of numbers and guys that are prepared to work hard” strikes the required mix.

“The guys are almost there,” he said.

As a father of two – he and wife Jessie have young son Max and baby Imogen – Murphy said his next step in life was to “do something different” outside of football but his passion for the sport remains.

Meanwhile, there is one more match to prepare for.

“Hopefully, we can get a win and I can sing the song one last time with the boys. Have a few smiles after the game,” he said.

That’s the least the Blues owe him.