Sean McMahon’s time to shine again on the international stage has arrived, with the back-rower set to be named on the Wallabies bench to face Argentina on Saturday.

If he gets onto the field, it will be 1407 days between Tests for McMahon. His last outing was against Scotland in November 2017.

Wallabies coach Dave Rennie will officially name his match-day 23 on Thursday for Australia’s final Rugby Championship match, but Australia officials have confirmed McMahon’s name will be there.

The Wallabies fooled a few people last week by putting McMahon up for media duty in the days before the team’s first clash against Argentina, only for Melbourne Rebels back-rower Rob Leota to be named at No.6 for his first Test start.

It is unclear what forwards formation the Wallabies will use, but Pete Samu is firming to wear the No.6 jersey after an impressive cameo off the bench in Australia’s 27-8 win over the Pumas in Townsville last weekend.

Rennie might experiment with elements of his team this week, but the inclusion of McMahon will receive a big thumbs up from most Wallabies supporters.

Sean McMahon will play this weekend against Argentina.Credit:Andrew Phan/Wallabies Media

McMahon took up a lucrative contract in Japan at the end of 2017 to capitalise on what he felt could be a limited time as a professional given a run of injuries.

However, there is nothing stopping McMahon, 27, playing at World Cups in 2023 and, possibly, 2027 if his body remains in good shape.

McMahon is likely to get only 20 or 30 minutes off the bench. A No.7 by trade, he played the last of his 11 Tests at No.8 before walking away from the Wallabies.

McMahon admitted watching the Wallabies during the 2019 World Cup in Japan had brought home to him how much he missed playing in the jersey.

“You miss those games, especially when you’re sitting on the sideline watching it from the telly,” McMahon said last week. “It’s good to be back and the chance to potentially do it again.”

His latest stint with the Wallabies came about quickly. It was always unlikely he would spend two weeks of quarantine in Queensland and not play in the Rugby Championship. 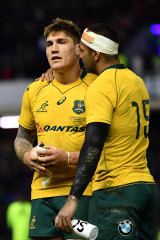 Full circle: Kurtley Beale consoles Sean McMahon after the Wallabies lost to Scotland in 2017. It was McMahon’s last appearance.Credit:Getty

McMahon also said he would be going at “110 per cent” intensity if given the chance to play. He has won all three Tests he has featured in against Argentina.

“I’m looking forward to the contact at international level to see if I’m still capable of standing up with the big dogs,” McMahon said.

After Saturday’s match, the Wallabies have a three-week break before their next assignment against Japan in Oita.

Marika Koroibete has been given the week off to be with his family, having missed the birth of his son in July during the France series. The easy option would be to bring Jordan Petaia onto the left wing but a reshuffle could also be on the cards.

The Wallabies will be aiming to make it four straight victories, something they haven’t achieved since 2017 when they beat Argentina, New Zealand, Japan and Wales.

Victory would also mark the first time Australia have won four Rugby Championship or Tri Nations matches in a row. Argentina will also name their team on Thursday.

Springboks coach Jacques Nienaber believes it will take a “colossal” effort to beat the All Blacks this weekend and prevent a fourth straight loss for the first time since 2016.

The 2019 World Cup champions have crashed to earth following two defeats to Australia before a 19-17 loss on Saturday to New Zealand.

The Springboks let their world No.1 ranking slip when Jordie Barrett kicked a late match-winning penalty in a Test where the All Blacks were also well below their best.

“We know it is going to take a colossal 80-minute effort but the drive to succeed and motivation to win this weekend is as big as it gets,” Nienaber said. “Last week we stuck to our DNA and style of play. With a little more luck we could have come away with the result, so we need to ensure that we are better at it this week.”

South Africa have not lost four matches in a row since a string of defeats against New Zealand, England, Italy and Wales in late 2016.

South Africa’s director of rugby Rassie Erasmus, who coached the Springboks to World Cup glory two years ago, said the criticism was warranted.

“When we were winning [by] two or three points we were not complaining about the credit and positive comments we received,” Erasmus tweeted this week. “So please be sure that we understand, agree and won’t complain when we get the deserved negativity when we lose [by] a few points!”

Stan Sport is the only place to watch every match of the The Rugby Championship continuing this Saturday with the Wallabies v Argentina followed by the Springboks v All Blacks – both matches streaming live, extended and ad-free on Stan Sport from 4:15pm AEST.