In today’s AFL briefing, your daily wrap of footy news:

Check back in for updates throughout the day

Steven May has served his club-imposed suspension and will return for Thursday night’s blockbuster against premiership rival Brisbane Lions at the MCG, coming as coach Simon Goodwin embraced the support he himself had received from club powerbrokers.

The Demons have endured a tumultuous month, having dropped three-straight matches to Fremantle, Sydney and Collingwood, lost May to suspension because of a boozy restaurant altercation with Jake Melksham, while dealing with the fall-out between former president Glen Bartlett and the club.

May missed round 12 because of concussion protocols, then had a club-imposed ban after his fight with Melksham, sitting out the clash against Collingwood.

Thumbs up: Steven May returns to the side after missing because of concussion protocols and a club ban for his altercation with Jake Melksham. Credit:Getty Images

His presence as a lockdown defender has been missed, with Goodwin on Monday declaring May was working to regain the trust of his teammates.

“Obviously, we haven’t had much cohesion in the back half of the ground in the last month. We have had a variety of guys out for a variety of reasons,” Goodwin said.

“He [May] is an outstanding player, and he will come back in. He has trained outstandingly well. He is really keen on building the trust back with the playing group and putting his best performances on-field and leading like he does on-field to a really high level.”

Melksham is also available for selection, having overcome a hand infection as a result of the fight, but the Demons now begin a major stretch of up to five weeks without skipper Max Gawn (syndesmosis), leaving rising star Luke Jackson to shoulder a greater load in the ruck. Jackson, soon to be off-contract, can use this period to heighten his already lucrative value as a forward-ruck.

“It’s an enormous opportunity for Luke to really step up. We have seen what he is capable of in a range of different situations. To [have] that mantle of No.1 ruckman will be really important, his ability to step up and do it a different way,” Goodwin said.

“Max is a pure tap ruckman, Luke is slightly different – he gives us a different look at ground level.”

West Coast Eagles great Peter Sumich said over the weekend he was of the understanding Fremantle had offered Perth-born Jackson a seven-year, $10.5 million deal.

Sam Weideman, who has played six matches this season, is another ruck option but fellow tall Majak Daw (pectoral tear) is a month away from resuming. 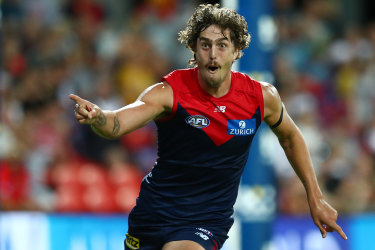 Luke Jackson, expected to entertain lucrative offers to head home to Perth, has a chance to step up as the Demons’ frontline ruckman against Brisbane.Credit:Getty Images

Goodwin used the Demons’ four days off over the bye break to clear his mind and go surfing at Double Island in Queensland – but it’s now back to business. While they sit second on the ladder (10-3 win-loss record), the Demons have slumped defensively, including in allowing opposition scores per inside 50, points against from turnovers and defending ball movement.

They have struggled to kick goals, going from fifth last season to 10th in the past six weeks for points for, and points from turnovers.

Key forward Ben Brown has only two goals in his past four matches, all coming against the Magpies, with Goodwin declaring Brown “is not too far away from being in some really good form”. The absence of Tom McDonald (foot) has hurt.

Even more damning has been the Demons’ drop off in pressure, plunging from ranking third last year when they were ferocious around the ball, to 18th this season.

They have become stagnant in their ball use, for they are ranked No.1 for kicking down the line and ranked No.18 for switching the ball across the ground. However, Goodwin denied this was an issue, declaring the team’s method “stacks up”.

Clayton Oliver has been superb in the midfield, but the Demons need greater consistency from Christian Petracca.

Off the field, the Demons have continued to back Goodwin, coming amid claims about his alleged behaviour, including bullying, and the departure of club doctor Zeeshan Arain.

“The club put out a really strong statement about what they thought of all those claims. I know who I am. There are no behavioural issues on my behalf. For me, I haven’t really thought about it for the past 18 months,” Goodwin said.

“We have moved forward as a footy club. It is not a distraction from the players’ perspective and for me personally.”

In a statement released on Friday, the Demons said: “Separately, the board would also like to reiterate its support of the club’s people, particularly Simon Goodwin, who have been unfairly targeted as part of inaccurate and unsubstantiated media reports.”

It emerged in February this year that the Demons’ board had early last year broached the subject of firing Goodwin amid allegations of gambling, bullying and other behavioural issues. This included Bartlett meeting AFL chief executive Gillon McLachlan.

Bartlett has recently filed a writ in the Supreme Court of Western Australia, suing The Age and journalists Jake Niall and Caroline Wilson for defamation.