Noah Lolesio’s penalty on the final play of the game snatched a 23-21 win for Australia over France in Wednesday’s first Test in Brisbane and denied Fabien Galthie’s men their first win over the Wallabies on their soil since 1990.

Les Bleus were on top at half-time as Gabin Villiere crossed twice in the first half, with Louis Carbonel also landing one conversion and a penalty, although a converted try from Brandon Paenga-Amosa kept the home side within touching distance.

France were on the back foot for much of the second half and Michael Hooper’s try as the clock ticked over to the final 10 minutes kept them within touching distance.

Yet just as it looked as if the visitors would hold out, they inexplicably wasted possession from winning a line-out after the full-time siren sounded and Lolesio, who had earlier missed a drop goal to win the match, stepped up to slot the winning points in the 83rd minute.

Missing some star names like Antoine Dupont and Romain Ntamack due to their involvement in the Top 14 final, France made a strong start and took the lead in the sixth minute when Villiere finished on the left.

Winning a scrum against the feed, the French forwards then kept the ball alive by getting their offloading game going inside Australia’s 22 before Jonathan Danty flung a cut-out pass to the Toulon man for him to finish.

Louis Carbonel was unable to convert, but he did land a penalty in the 19th minute after Hunter Pasami had a try ruled out for the hosts after the TMO deemed Jake Gordon’s final pass to the centre was forward. 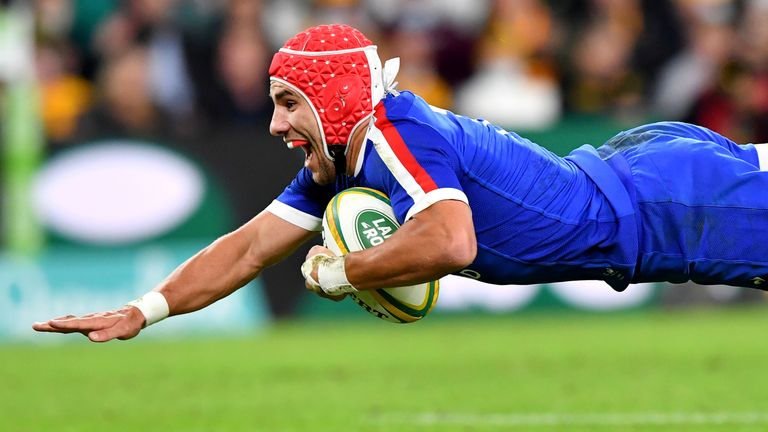 Villiere pushed France further ahead three minutes later, with Stade Francais centre Danty again providing the assist as he put a short pass back inside for the wide man to race through a gap in the defence and in for a converted try after the Wallabies had put them under pressure at a scrum.

Australia gained the ascendancy towards the end of the half, though, capitalising on decisions to repeatedly kick to touch as the tourists strayed offside and infringed at the maul when a powerful drive from a five-metre line out led to Paenga-Amosa dotting down and Lolesio converting on 34 minutes.

Trailing 15-7 at the break, fly-half Lolesio narrowed the deficit for the home side further with a 43rd-minute penalty following a positive start to the second half from the Wallabies, but replacement Anthony Bouthier hit back from in front of the posts eight minutes later to restore the eight-point cushion.

Australia were unlucky not to add a second try in the 55th minute when Tom Wright was unable to gather a pinpoint grubber kick from Pasami cleanly as it bounced awkwardly in-goal, although Brumbies man Lolesio’s second penalty on the hour kept the scoreboard ticking over for them.

That was cancelled out by a third French penalty, this time from the boot of Melvyn Jaminet, yet it was game on with 10 minutes to go when skipper Hooper finished from close range for a converted try after the Wallabies had been hammering away at the French line following the decision to kick to touch from another offside penalty.

Lolesio had a chance to win it for Australia in the 77th minute, but his drop goal attempt curved just wide of the mark, while Pasami’s cross-field kick to the right wing with replacement Andrew Kellaway in space had just too much on it and went into touch.

However, there was one more twist in the tale as France squandered possession from a line-out and Australia recovered the ball, powering up field to apply pressure to the line. Then when the French defence strayed offside, it allowed Lolesio to step up and snatch victory from the jaws of defeat in the 83rd minute.

The Wallabies can now clinch the series in next Tuesday’s second Test in Melbourne, while France’s long wait for a victory away to Australia will go on for at least another six days.