‘I whacked a Springbok… 20 years later he said: JPR, that was the best punch I ever took!’: Lions legend Williams recalls the brutal 1974 tour of South Africa… when the best of Britain and Ireland won an incredible 21 matches out of 22

As an aggressive, counter-attacking full back who once returned to the field against New Zealand after having 30 stitches in his face, JPR Williams was never afraid to put his body on the line.

But the legendary former Wales and British & Irish Lions star of the 1970s and 80s admits nothing in his great career came close in terms of brute physicality to the 1974 Lions tour of South Africa.

That trip – which Warren Gatland’s class of 2021 will recreate this summer – was the most successful in Lions history with the team undefeated. Winning 21 and drawing one of their 22 matches, Willie John McBride’s side stood toe-to-toe with the giant Springboks. 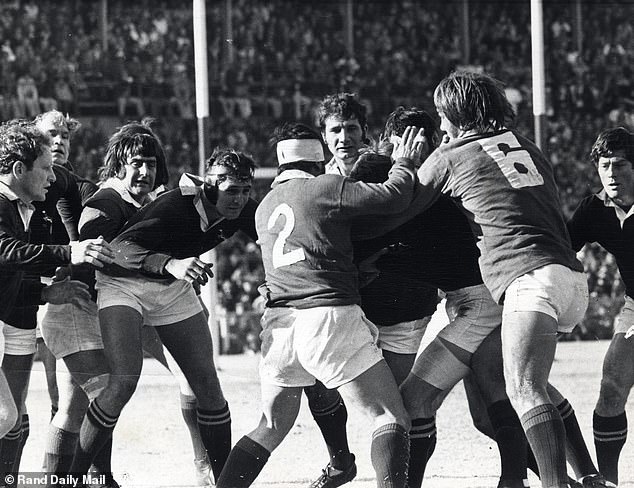 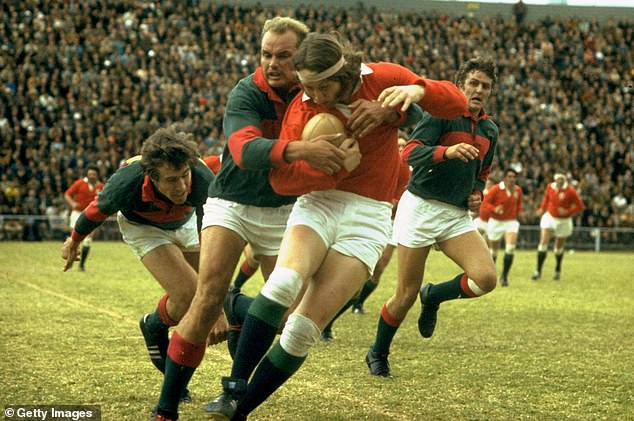 In one of the most physical Test series battles of all time, frequently marred by on-pitch violence, the Lions of 47-years-ago decided they would not stand for any opposition aggression, however illegal.

Captain McBride instigated a call of ’99’ – a cue for every Lions player on the pitch to join the fight if trouble broke out, by hitting the nearest Springbok.

The thinking was that it would make it more difficult for a single Lions player to be punished by the officials if everyone was guilty of something.

‘Willie John was our captain and he was on his fifth Lions tour. How the hell he did that I don’t know,’ said Williams. ‘He drummed it into us that we weren’t going to be physically intimidated.

‘We had this emergency call. It started off as 999 but that was a bit long, so we shortened it to 99. We only used it twice and it paid off! There were no cameras in those days.’ 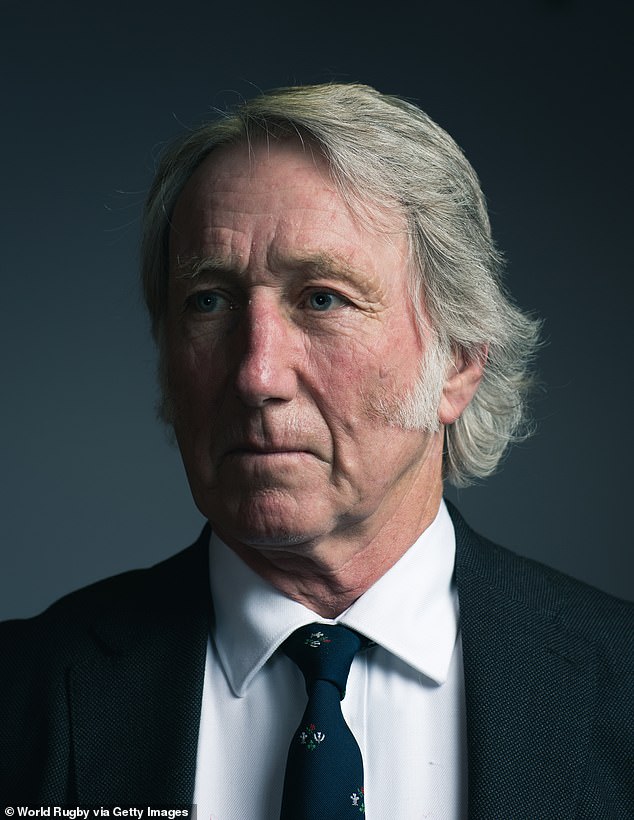 The Lions won the 1974 Test series 3-0 with the final match drawn 13-13. The third Test – regarded as one of the most brutal in rugby history – became known as the Battle of Boet Erasmus.

‘At one point I ran in about 50 yards and hit the biggest South African forward, called Moaner van Heerden,’ remembers Williams. ‘About 20 years ago, I happened to be on a train with him. He came up to me and said, “JPR, that was the best punch I’ve ever received in my life!” The third Test was also remarkable because us backs couldn’t understand why all the forwards were suddenly looking around on the floor.

‘They were looking for Johan de Bruyn’s glass eye! I was lucky to play on two successful Lions tours – New Zealand in 1971 and South Africa in 1974. They were a fantastic part of my life.’

Williams’ felling of Van Heerden and Gordon Brown’s punch on De Bruyn which knocked his glass eye clean from its socket are stories which live on in Lions folklore. Nearly half a century later, rugby is very different as Williams, now 72, agrees.

Still, the need for the Lions to match the giant South Africans physically remains as important as it was then. ‘You have to be cleverer than the cameras, which is very difficult to do,’ said Williams with a glint in his eye.

‘We’re not going to pulverise the Springboks up front this summer. Like any tour to South Africa, they will be so tough. 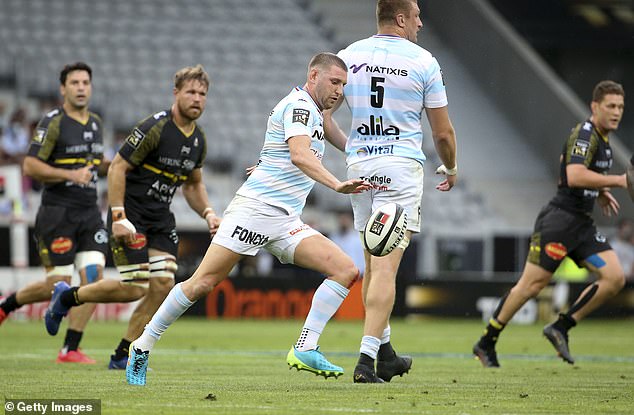 According to Williams, Finn Russell deserves to be involved despite being ‘a bit of an enigma’

‘We’re going to have to try and get parity and then move the ball, which is why I’d like to see Finn Russell play. He’s exciting, a bit of an enigma, but he’s the sort of player you want.

‘We do have an advantage because South Africa haven’t played. You have to play, however good you are.

‘The series will probably go 2-1 either way. The first Test on any Lions tour is huge – if we lose the first Test, we’re done.’

Williams won 55 Wales caps and eight for the Lions. Alongside the likes of Sir Gareth Edwards, Phil Bennett, Barry John and JJ Williams, he entertained for both.

‘I was lucky all the teams I played for – Bridgend, London Welsh, Wales, the Lions – played an attacking game. We entertained and enjoyed it ourselves,’ recalled Williams. ‘Modern players need to realise they are getting paid big money and they have to entertain the public.

‘Liam Williams does that. I think I see a bit of myself in him. I’ve always rated him. He’s very comfortable counter-attacking and he’s a good tackler. He’d be my No 1 full-back choice for the Lions. Even though I think Stuart Hogg is superb, Liam has that little bit extra.

‘I think rugby’s laws are quite stagnant. It comes down to the fact there isn’t much room to move on the field. When I played, we used to be 20 metres apart so you had a chance of moving. Now, it’s man and ball. You can’t play like that.

‘There are also too many substitutions – it’s absurd and a real problem.’

Williams is unlikely to get his wish for free-flowing rugby this summer with South Africa set to continue naming six forwards among their replacements.

This ‘bomb squad’ helped them dominate the last World Cup where they hammered England in the final. Since then they haven’t played a minute of action.

Williams will watch this summer’s series at home in Wales, but his strident views on the Lions are replicated when it comes to discussing the state of Welsh rugby.

They might be Six Nations champions, but the country’s four regions have long struggled to compete with English, French and Irish clubs for domestic success.

Covid has only exacerbated the financial struggles the Welsh regions have experienced for years. 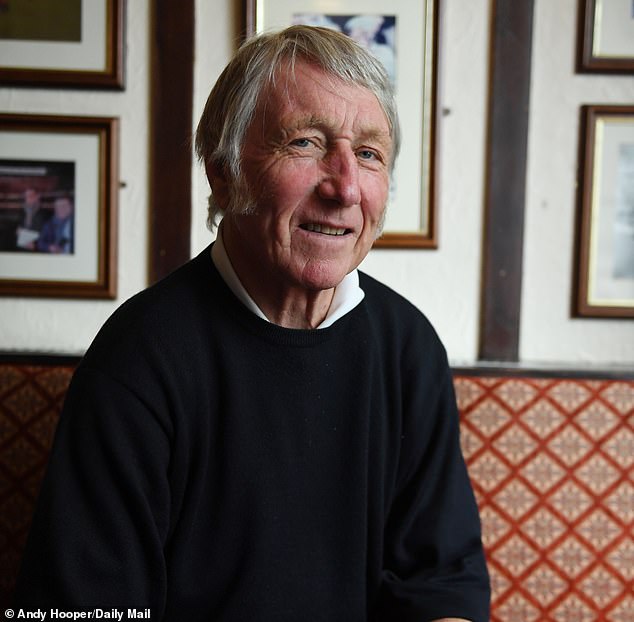 ‘We are playing above ourselves in the Welsh national side at the moment because our regional rugby is rubbish, I’m afraid,’ said Williams. ‘The sooner we have two Welsh teams – East and West – the better. I said this about 10 years ago and I stand by it. We can’t afford to have four regional sides.

‘The whole point is to get players fit to play for Wales and a lot of them aren’t good enough.

‘We need to bring Swansea and Llanelli and Cardiff and Newport together. I know they won’t like it, but financially it makes no sense to have four regional sides. We’ve got to admit we haven’t got that many players in Wales. Wayne Pivac is going against the grain really with the way he wants to play. Everybody loves watching Wales play.

‘It’s been fantastic and a real breath of fresh air, but another bugbear of mine is that we should encourage Welsh players to go and play in England.

‘I’ve got five grandsons and they all idolise Louis Rees-Zammit (Gloucester). These are the sorts of players you need to keep the youngsters interested in rugby.’