Day of reckoning for Lions’ Test stars: Robbie Henshaw, Marcus Smith and Co have one final audition to impress Warren Gatland ahead of their last warm-up encounter with the Stormers before series with the Boks kicks off

Robbie Henshaw and all the Lions Test wannabes know the significance of Saturday’s encounter with the Stormers. This is the final audition.

The 28-year-old Ireland centre makes his first appearance since arriving in South Africa, well aware of the sky-high stakes.

Having overcome a hamstring injury which has kept him out of action since the pre-tour win over Japan, Henshaw is raring to go and determined to deliver a statement about his readiness to face the Springboks at the same stadium here in seven days’ time. 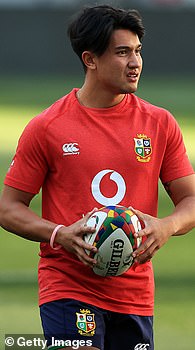 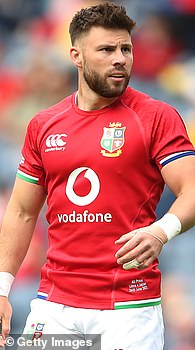 (L-R) Robbie Henshaw, Marcus Smith and Ali Price are all pushing for a first Test spot next week

‘People know what the circumstances are in terms of this being the last game before the first Test,’ he said. ‘I’d probably be thinking that anything can happen during the tour. A lot of chopping and changing can happen. You need to be ready for anything.’

Asked if there would be tension in the British and Irish squad in the aftermath of this last fixture before the international phase of the trip, Henshaw added: ‘Yeah, absolutely. There’s always a huge buzz when you enter the Monday of a Test week. Once you flick the switch, that’s when the intensity is really ramped up in training, meetings, everything. That’s when we’re full on it. Everyone’s going to be buzzing for the week ahead.’

There will be so many men on missions to impress head coach Warren Gatland and his assistants on Saturday evening — while also seeking to re-establish some positive momentum after the Lions’ midweek loss to a Bok-laden South Africa A side. 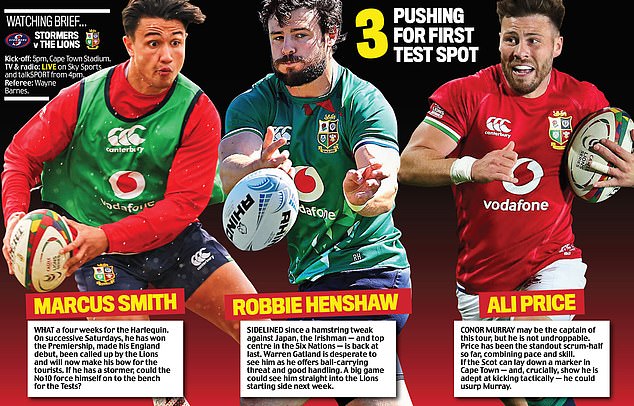 Captain Stuart Hogg is another making up for lost time after a week of frustrating isolation in Johannesburg, Elliot Daly can stake a claim to the No 13 shirt and Ali Price has a chance to reinforce the view that he is the squad’s form scrum-half.

Up front, Tadhg Furlong will want to reassert himself as the pre-eminent tighthead prop after Kyle Sinckler’s impressive mid-week exploits, while Tadhg Beirne and Hamish Watson can both enhance their claims as Test flankers-in-waiting.

And Alun Wyn Jones looms on the bench, poised to complete his Lazarus comeback from a dislocated shoulder against Japan and provide fresh evidence that he is the right man to lead the tourists into the Test series.

Henshaw hasn’t been seen since that Murrayfield match either and he could be the missing piece of the midfield jigsaw, with Daly or Chris Harris — who has been outstanding in every appearance — alongside him against the Boks. If he goes well against the Stormers, he will surely start next weekend, too. 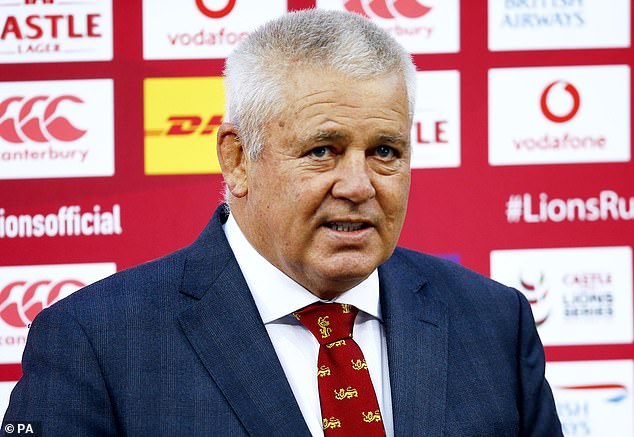 Attack coach Gregor Townsend was asked about the Leinster centre and he said: ‘He can have a huge role, because he’s an all-round player. He’s a good attacker, both as a ball carrier and a passer, he’s a very good support runner, too, and he’s got the kick-chase ability which he showed really well against Scotland this year.’

Following his own belated emergence from isolation, Townsend is back on active duty and ready for an occasion with profound implications.

‘It’s really important — the last game before the Tests,’ he said. ‘It’s a big game for our learning, and it’s obviously a huge game for selection. We haven’t discussed Test selection at all and we know that’s going to occupy our minds on Sunday. This is the last chance for players to put their hands up.

‘We don’t have to remind them. The players who played on Wednesday would have realised it was an even bigger opportunity for them because we were playing a shadow Springbok team. But what is freshest in coaches’ minds obviously has influence, so how well the players go tomorrow will add to what they’ve already done on tour.’ 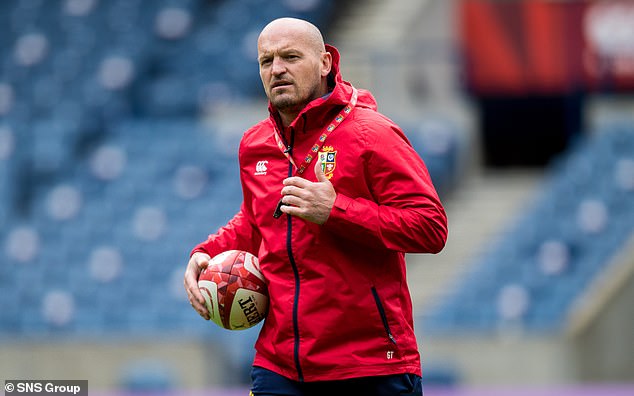 Henshaw is confident that he can grab his chance today to ensure that this Lions campaign works out better for him than the last one in 2017, when he was forced to fly home early with an injury. He had been unable to really make his mark on that tour of New Zealand, but four years on, he feels more equipped to thrive in such exalted company.

‘I have definitely matured as a player,’ he said. ‘I am more knowledgeable. From being on that last tour, it is completely different to now.

‘I feel more experienced and I can bring more to the table than I did back then when I was 23, 24 — I am getting more involved in the game. I am really enjoying the tour, in spite of the circumstances here.’

Soon after arriving here, he suffered a setback in training, tweaking a hamstring. 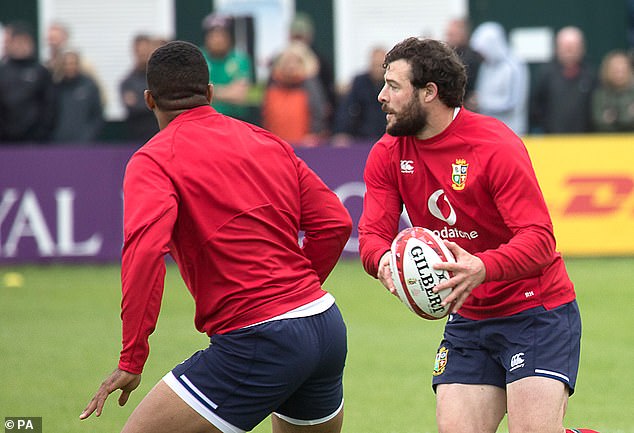 Asked if he feared the worst, another tour cut short, he added: ‘Not really. I knew straight away that the (2017) tour was over with the nature of the injury. I knew this one was only a small niggle.

‘I knew and the physios knew after assessing me that it was only minor and it could be turned around in a couple of weeks. That was positive and, thankfully, it wasn’t tour ending.’

Within the Lions camp, Henshaw has been demonstrating his musical talent — playing the guitar and accordion.

Now, it is time to concentrate on the day job. For the Irish No 12 and so many others, this is the moment of truth.

Related posts:
Previous Post: HOT OR NOT: It's possible to be proud of Gareth Southgate but critical
Next Post: Chelsea fans blown away by Kepa after hitting crossbar EIGHT times