Jesse Southwell is 17, has a gold medal at home, Andrew Johns in raptures and a “happy place” she needs to get away from.

Just three weeks after winning Commonwealth Games gold with Australia’s sevens side in Birmingham, Southwell will make her NRLW debut for the Knights opposite Brisbane, Queensland and Australia captain Ali Brigginshaw.

Southwell passed her P-plate test a few months ago and the same NRL age-exemption process as Joseph Suaalii at the start of August.

Johns told Channel Nine afterwards he believes she will be “the best player in the competition in a couple of years”, having worked with the budding No.7 last summer.

NRL chief executive Andrew Abdo was similarly impressed by Southwell when they met recently. The conversation centred on the biggest challenge the highly touted teen has faced in her fledgling career.

“Footy is my happy place,” Southwell tells the Herald. “So it’s pretty easy to just be involved with footy a lot. But I’m trying to step away and find a hobby and not have my mind focused just on footy – that’s probably the hardest part.”

Jesse Southwell with her new Knights jersey, and with Australia’s sevens team after their gold medal win at the Commonwealth Games.Credit:Knights, Instagram

So what has she found so far?

“Umm, I like to juggle. And what else is there? I like to eat a lot of food.”

“Best player” in the competition can wait; “most quotable” might already be here.

“I’ve been juggling since I was 12,” she says. “A friend showed me at a cricket camp and I loved it straight away.

“I’ll just juggle three balls, and I’ll change it up, going under your legs and some other new tricks.”

Hannah arrived at the Knights after winning the premiership with the Roosters last season. She has been elevated to co-captain at Newcastle alongside fellow marquee signing Millie Boyle, with the Southwell sisters happily trading pot shots and praise in equal measure before Sunday’s clash.

“She’s very headstrong, she won’t ever listen to what I’ve got to say and she’s our halfback,” Hannah deadpanned during the week.

“So whatever she says kind of goes. I’ve accepted that fact. It took me a while.

“At training she says a few things and I look over my shoulder and give her a few dirty looks … but we’re all really excited for her to control the field. I haven’t really played with a halfback that [controls] a game so well.”

That last line is significant: Hannah has played for the Jillaroos alongside Brigginshaw, NSW Origin with Maddie Studdon in her pomp and won a premiership next to Kiwi international Raecene McGregor.

Among the sisterly sledging, both Southwells give the impression that Hannah has helped keep Jesse’s feet on the ground – long before the latter, then aged 12, first joined her on the paddock when Hannah’s under-18s side was short a winger.

“I’ve always looked up to Hannah,” Jesse says, even though she took the family’s one set of shoulder pads that first time they played together. 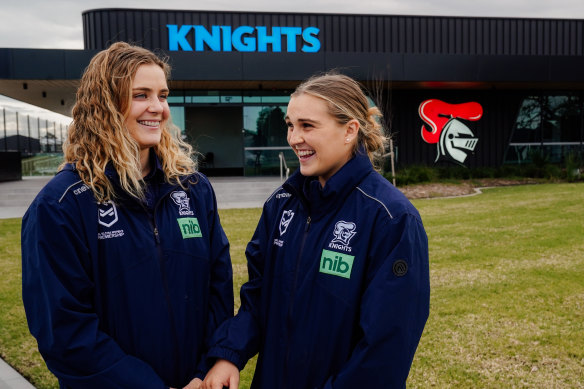 Hannah and Jesse Southwell will play alongside each other at Newcastle this season.

“She’s been my hero ever since I can remember. In my eyes, she’s the best player, man or woman, that I’ve seen. But that’s just me.

“The pathway she’s been through and the different sports she’s played, I think she’ll always be my inspiration and my hero.”

Jesse is too young for Eighth Immortal Johns to fit that bill, but as a playmaking prodigy she is still in awe of the Knights icon.

“Joey’s a top bloke; he ran a couple of sessions with us at the start of the year,” she says. “He speaks about the ball as his magic wand and what he does with it, even now, I’m left speechless. I’m sitting there thinking, ‘How did that happen?’”

Since those summer sessions with Joey, she has travelled the world with Australia’s sevens side, played a gold medal match, met Abdo and plotted a code switch while on the other side of the globe.

Southwell came off the bench when Australia’s sevens side beat Fiji 22-12 to claim gold in Birmingham. She says the medal “belongs to those girls”. 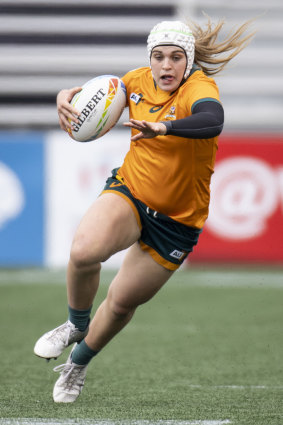 Jesse Southwell is only 17 but already has a Commonwealth Games gold medal.Credit:Getty

The NRLW age-exemption process was already under way while Southwell was in the sevens camp.

Her juggling skills came in handy as she kept her shift back to league under wraps, although the move seemed inevitable given the Knights made her their first NRLW signing a week before her 15th birthday in 2020.

“I was solely focused on sevens leading up to the Comm Games; I was living out of a suitcase for eight weeks going down to Sydney,” she says.

“We were training four days a week and travelling back and forth from Newcastle three times a week. We knew I needed to focus on the field, so it wasn’t until [the tournament] that we let the sevens coaching staff know.

“That was … not awkward, maybe confronting is the word? I was by myself and these things were coming out and I had to let not only the coaching staff know but the girls as well. It was pretty difficult and something I wasn’t used to, but we got through it.”

It was those confronting situations Abdo raised when he met Southwell and her father recently, getting a gauge on the youngster’s grasp of the media attention and public scrutiny that come with performances – good and bad.

“Clearly she’s a very talented athlete from a physical perspective, but I was really impressed with her maturity,” Abdo told the Herald.

“She impressed in terms of her perspective on some of the challenges she’s likely to face, but also what some of the opportunities are for her.

“I think she’s going to be a very successful player in the NRLW for a number of years.”

High praise from both the NRL boss and the game’s greatest halfback leads to expectation, pressure and one last question. Has she ever worried if it’s all too much, too young?

“Not really,” Southwell says after a few seconds. “I don’t think the sevens program or the Knights would put me in a situation that would hurt me or was something I couldn’t handle.

“Because, when it comes down to it, footy is footy. No matter what you’re playing, whether it’s under 9s, sevens or NRLW, it’s all the same thing, footy is footy: run hard, tackle hard and that’s it.”