Jodie Cunningham is doing her utmost off the field as well as on it to ensure next year’s Rugby League World Cup will be one to remember.

Having overcome an injury to be part of the England squad which reached the semi-finals of the last tournament in Australia in 2017, the St Helens full-back is naturally eager to be involved again on home soil in 2021.

But Cunningham’s involvement in the sport’s global gathering goes beyond her playing ambitions, being involved this time around on the organisational side in her role as one of RLWC 2021’s InspirationAL Ambassadors.

The 27-year-old, who will be the studio guest for Sky Sports‘ live coverage of the Super League clash between Warrington Wolves and Castleford Tigers on Friday, therefore has even more of a reason to want to be taking on the world’s best with her England team-mates.

“It would mean everything and after I got injured before the 2017 World Cup, I had that niggle in the back of my mind that knows there is nothing you can take for granted,” Cunningham told Sky Sports.

“For me, it’s going to be the most surreal experience and to play on home soil in some of the most fantastic stadiums there are in England is absolutely outstanding for the women’s game.

“I’m desperate to be a part of it, but equally to make sure I don’t take anything for granted and make sure I do everything I possibly can to get myself there. 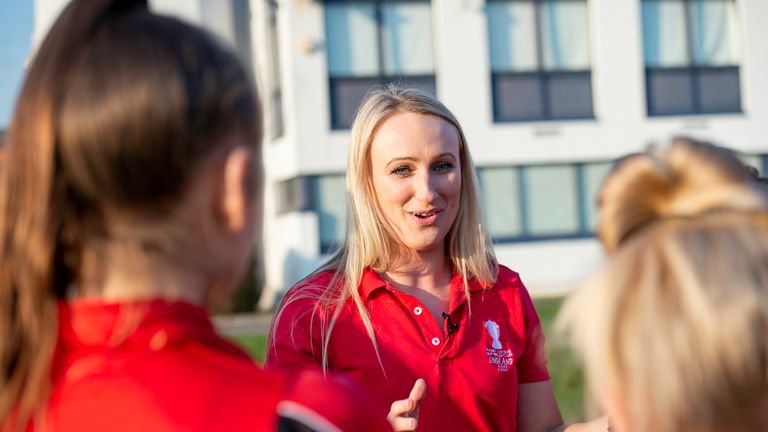 I’m desperate to be a part of it, but equally to make sure I don’t take anything for granted and make sure I do everything I possibly can to get myself there.

“Either way, at least with my day to day role I know I’m going to be involved one way or the other, which is a little bit of reassurance, I suppose.”

The women’s tournament will take place alongside the men’s competition, with the finals of both being played as a double-header at Old Trafford, as will the eight-team wheelchair World Cup.

Cunningham is excited by the potential all three tournaments could unleash for rugby league and believes progress is already being seen with regards to the number of women and girls starting to take part in the sport. “I genuinely believe it is the biggest opportunity the sport has ever had – and probably will have for a number of years – to take hold and grow,” Cunningham said. “That’s as a community, growing the participation, but also the spectator base.

“We’ve got some really important milestones coming up and it’s a great opportunity to have women, wheelchair and disability athletes taking part in a tournament, giving us new spectators and new audiences, which might not have been exposed to or interested in the men’s game.

“Next year is the big moment we need to clinch so in 2022 and beyond, the sport grows off the back of this investment and all the planning, and I think the women’s game is a prime example of how this tournament is helping to grow the sport even prior to it taking place.”

Cunningham is well aware of the need to get more girls playing and progressing to open-age teams to ensure the Women’s Super League and England side continue to go from strength to strength beyond next year’s World Cup.

Had so much fun visiting the kids at Woolston Primary School with @HoneyHireme! The kids were awesome and taught me a thing or two ??‍?? #RLWC2021 https://t.co/7oP6zJnzox

And she believes both her and her fellow Women’s Super League players have a responsibility to lead the way in inspiring them.

“I see that as part of a role for all of the women who are in the game now because we’re the first crop of players having that media exposure and a bit of a profile in the game,” Cunningham said.

“Young girls can see us and hopefully try to emulate us and see us as idols so they can go on and do similar or probably much better things than we have done in the game.