Nasiah Wanganeen-Milera is used to carrying famous names on his back.

The 19-year-old St Kilda wingman is the step-son of former Saint Terry Milera and nephew of premiership player Gavin Wanganeen, and now wears the number of AFL great Nicky Winmar.

Wanganeen-Milera will now also don St Kilda’s new Indigenous-themed jumper designed by Winmar next weekend, if selected for his first Sir Doug Nicholls round in the AFL.

“It’s real honour and privilege to wear the number he wore. Obviously, he’s a big role model and leader in the Indigenous community and a big part of the history of AFL and St Kilda as well. I met him for the first time before my debut game and it was pretty special,” Wanganeen-Milera said.

The Saints’ new 2022 Winmar-designed Indigenous guernsey has a similar look to last season, however, the team will wear the white version for the first time this year, following the lead of the AFLW team in January.

Wanganeen-Milera is one of nine First Nations players at the Saints – a record number for the club in a season.

Among them is veteran ruckman Paddy Ryder, speedy mid-forward Jade Gresham, hard-nut defender Ben Long, and silky outside midfielder Bradley Hill, who Wanganeen-Milera looked up to before entering the AFL. 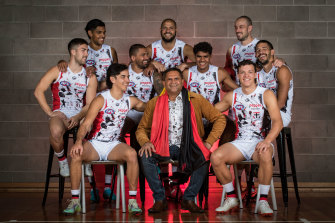 The Saints now have a record nine Indigenous players on their AFL list.Credit:Getty Images

“I think having them there made me feel for comfortable and we always understand what each other is going through,” Wanganeen-Milera said.

“So if I ever need help with anything, or support, they are always there to lean on, just like the other players and coaches as well. I’ve already made real close relationships with them all.”

The Saints also fielded a club record seven First Nations footballers against Hawthorn in round seven, with several expected to play next weekend in Sir Doug Nicholls round.

“It’ll probably be a cool experience to be a part of it and just to celebrate Indigenous culture and what some Indigenous players have brought to the game,” he said.

Wanganeen-Milera has played every game for the Saints so far in his debut season, although he spent his first as an unused medical substitute. The wingman is yet to pick up a Rising Star nomination, but has shown flashes of class in his eight-game career.

Wanganeen-Milera said he believes his best game so far was against Port Adelaide in Cairns two rounds ago, after he racked up a career-best 18 touches – including 15 kicks – in difficult conditions.

“I’m building and just developing up into the AFL game and the boys are really helpful with that, and the coaching staff as well always help me out,” he said.

“Obviously, I’m going to make mistakes, but they’re always there to help along the way and help me make it easier to transition into AFL footy.”

However, the former Glenelg standout is yet to kick his first AFL goal, unlike his cousin and Essendon forward Tex Wanganeen. Wanganeen-Milera said he “had a bit of a laugh” when he saw his uncle Gavin’s “unexpected” celebration in the stands, but said his family may follow suit when he kicks his first goal.

“I probably won’t celebrate as hard as Tex or my uncle Gavin,” Wanganeen-Milera said.

Related posts:
Previous Post: Jamie Carragher warns Manchester City against Paul Pogba signing: ‘I wouldn’t go anywhere near him’
Next Post: Russia brute has blood running down face as he slugs it out in bare-knuckle bout