The Footy Show used to get inundated with hundreds of entries for its “League of their Own” segment, which showcased spectacular footage from junior football matches. Amone’s effort while playing for Western Suburbs Devils in the Illawarra competition was the pick of the bunch in 2014.

The footage, captured by his sister, showcases all of the skills that now have Amone earmarked as one of St George Illawarra’s most exciting prospects. The youngster accepts the kick-off and runs upfield, then puts on what Footy Show host Darryl Brohman describes as “the big Benji sidestep off the right foot”, does it again, cuts in off the left foot, by which time Brohman is comparing him to Roger Tuivasa-Sheck, and then beats at least half the opposition defenders on a zig-zag journey to glory and, ultimately, the big cash prize.

Amone’s parents ensured most of it went into his bank account, but the youngster was given some cash to splash.

“Because I was young I bought some toys for me and my brother, a bit of clothes,” he recalls. “I didn’t go too crazy.”

Talatau Amone takes on the Bulldogs in round nine.Credit:NRL Photos

What made the try sweeter still is that it was scored against a team featuring his great mate Tyrell Sloan. The pair played against each other since they were six years old before they were finally picked for the same side at representative level. Their bond grew stronger still when Sloan moved in with the Amone family – all 11 members of it – for the best part of two years.

“My son is always looking to help people; Tyrell came in with us,” Amone’s father, Talatau, says. “It was good. He is a nice kid.”

Sloan and Amone have since gone on to make their NRL debuts. So, too, has Jayden Sullivan and Max and Mat Feagai, who were all members of the Dragons’ premiership-winning SG Ball side in 2019. 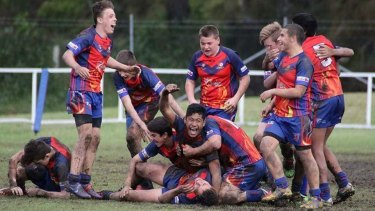 Dragons playmaker Talatau Amone in action during his junior days.

On Sunday, after a stunning cameo off the bench that included a try and a try assist against Penrith in round 22, Amone will start in his preferred position of five-eighth for the clash against the Roosters.

“To have five come through [from that SG Ball team], with another couple on the way, it’s crazy,” Amone says. “[Sloan and I] used to always talk about this and now we’re living the dream together.

“In the time he was with us he became really close with our family.

“Because we’re in the bubble in Queensland, we do everything together, it’s good. I see him as my little brother.” 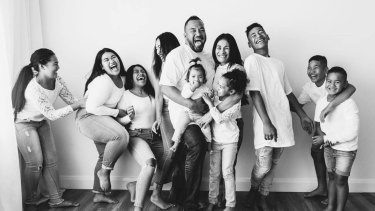 Talatau ‘Junior’ Amone with his family.

It’s not that Amone is short of a sibling. The teenage playmaker has six sisters and two brothers, one of whom – 15-year-old forward Viliami – is also coming through the Dragons’ junior ranks.

“He’s a lot bigger than me, I’ll tell you that,” Amone says.

“I’m keen to see him progress and my younger brother, Api, I want to be a role model for them. I try to put my best foot forward every time I take the field to inspire them to do what I’m doing.”

Amone’s sisters are also talented footballers, but the family’s sporting pedigree goes well beyond that. One of his cousins is Justis Huni, the Australian heavyweight boxing champion who would have gone to the Tokyo Olympics had he not suffered hand injuries in his knockout victory over Paul Gallen in June.

Amone, who was ringside for the event with his family, says boxing plays a huge role in his pre-season preparation.

“I enjoy boxing so much,” he says. “Every off-season I do boxing training because it helps me with my conditioning and self-defence, just in case I need it one day. 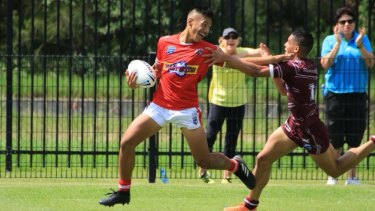 Rising star Talatau Amone in action during his junior days.

“Boxing helps me with my breathing, my footwork and stuff like that. Every off-season I jump into boxing and train hard during the pre-season.”

Amone has trained with Brad Gallagher, the man who guided Shannan Taylor to a world boxing title, and is open to the prospect of stepping into the ring himself in the future.

“Down the track I’d love to get into the ring and have a bit of a scrap,” he says.

Amone almost followed another cousin into a different sporting career, however. Western Force prop Siosifa Amone is touted as a future Wallaby and Amone was also a standout when coming through the grades. He used to play league on Saturdays and rugby on Sundays, making the NSW Waratahs squad before turning his attention to the 13-man game.

Asked if he would consider switching codes, Amone says: “It hasn’t crossed my mind yet. I’m loving league. Who knows, at the end of my career, or in a few years – we’ll see what happens and what I prefer. Rugby is a worldwide sport and I wouldn’t mind travelling the world. But we’ll wait and see. 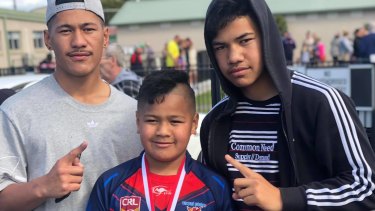 Talatau Amone with his brothers Api and Viliame.

“The Dragons saw the potential in me and gave me a three-year contract, so it’s time to give back for looking after me since I was young.”

The immediate focus is on helping the Dragons secure an unlikely finals berth. Coach Anthony Griffin handed him the No.6 jersey for the clash against the Roosters and Amone wants to make it his own.

“Especially starting this week in my favourite position; I’ll find my feet a lot after this game,” he says.

“I’m just focusing on this next game. Hopefully I perform well and get to stay there for the rest of the season and carry it on to next year.”