Carlton’s Mimi Hill was “pretty flat” when the Blues lost seven players, including W Award winner Madison Prespakis, during the break between seasons, but insists the club is now in a good place heading into season seven.

After the end of the season in April, the Blues lost Prespakis and talented forward Georgia Gee to expansion side Essendon. Then, during the sign and trade period, young midfielder Grace Egan moved to Richmond, Lauren Brazzale to Collingwood, Courtney Jones to Gold Coast, Nicola Stevens to St Kilda and Charlotte Wilson to Melbourne.

Madison Prespakis will play for the Bombers in their inaugural AFLW season.Credit:AFL Photos

“I’m not going to lie. Like, obviously, it’s hard losing players,” Hill told The Age. “Especially when you spend so much time building relationships with them, like some of the players that left were some of my best friends.

“And it’s not like you’d lose that friendship, but it’s just so much harder because everyone’s doing different pre-seasons, you don’t get to see each other every day. So, it is hard and it’s sad.

“But then you have to think back that they don’t want to be at this club. So, how can you think you’re going to be successful if you don’t have 30 players that want to be here and make the team better?”

Hill, who was crowned the Rising Star of the competition last season, said the low feeling was shared among many in the remaining playing group, but club refocused on those that stayed plus their new signings.

“I was pretty flat, and I knew a few other girls were flat because there was a lot of people that left, but we still had 23 signed on and that 23, we kind of came together and we’re like, ‘you know what? Yeah, heaps of people moved on, but we got to focus on the people that are here’. And I think that’s contributed to a pretty good vibe around the club.”

The club did retain significant talent, such as two-time leading goalkicker and two-time All Australian Darcy Vescio and three-time All Australian and captain Kerryn Peterson (nee Harrington). Hill herself is developing into a star despite playing just six games after returning from an ACL injury. Though her season was shortened due to her injury, she polled third in her club’s best and fairest, behind Prespakis and Peterson, in addition to the Rising Star win. She averaged 21.5 disposals, the seventh highest in the league.

The 19-year-old said she was looking to add leadership to her performance for the upcoming season, especially given the club changes: “It’s a bit different this year because we have changed so much. I feel like I’ve got a different role. It’s not just like be young player, it’s more actually be a leader in the midfield. So, I think I’m trying to focus on that a bit more.”

Several clubs have been decimated by expansion in the AFLW’s past, which hasn’t meant they’ve been sent to the bottom of the ladder or been uncompetitive. Most notably, during the 2019-20 expansion periods, Brisbane lost 16 players in total, more than half their list, and then went on to win the 2021 premiership. 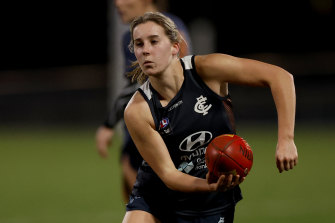 Carlton, while not as successful as the Lions in the history of the competition, did qualify for a preliminary final in 2020, before the competition was cancelled due to the COVID-19 pandemic and had promising seasons in 2021 and 2022 after slow starts.

Hill said despite the disruption between the seasons, and negative outside noise about player exits from the club, she had faith in what the Blues could achieve in season seven.

“Anyone who looked at, I don’t know, any social media about Carlton [and] the women’s team over the break would have seen there’s a lot of scrutiny and a lot of questions being asked. But everyone as a collective [at Carlton] knows what we’re trying to achieve, and obviously a lot of things happen, a lot of players move, but we’re still confident, and I’m really confident about what the group can achieve.

“Even if we don’t win like heaps of games, I know that will compete in all of them, which is more than I could probably say for the last season, so I’m feeling pretty good about it.”