Tom and Sam De Koning stand out in a crowd now, but on term breaks and at weekends not so long ago they were merely the eighth and ninth of 10 siblings squeezed into home-made bunks in the annex of an onsite caravan at Torquay.

“When you’ve got 10 kids, you can’t afford to take holidays,” said their mother, Jackie. “So the caravan it was. They all grew up there together.” Rejoins father Terry, a one-time Footscray ruckman: “They fitted in like sailors in a ship. It moulded the family. They all surfed. They still do. It’s such a healthy lifestyle.”

Terry and Jackie De Koning, the parents of young AFL stars Tom (Carlton) and Sam (Geelong) with a giant family photo including all 10 children.Credit:Jason South

Theirs is a tale of two peninsulas. Home was Safety Beach, and for the senior De Konings and their youngest daughter still is, but heart is Torquay. Seven of the 10 offspring have set up house within two kilometres of one another there.

Sam is building a house on a block that backs onto a sister’s place, with a gate between them. Meanwhile, he and another brother are renting a house Tom owns nearby. Their parents intend to move to the neighbourhood duly.

When the clan – now including four grandchildren – gathers, it is still most likely to be at or around the caravan. “In summer it’s doable,” said Terry.

The De Konings say Sam has fallen on his feet at Geelong. Playing there suits his temperament and lifestyle. Tom is ostensibly more driven. When it was observed over breakfast one morning at the family’s favourite cafe in Jan Juc that Sam was all over the Geelong Advertiser, Tom said: “Well, if there was a Lygon Addy, I’d be all over that.” 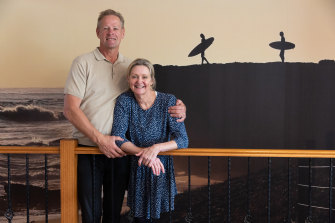 Terry and Jackie at home with an image of Tom and Sam surfing, taken by sister Zoe, in the background. Credit:Jason South

Asked if he’d like to play with Sam one day, he replied: “I’d rather play against him.” This week, for the first time in a competitive game he will. As it happens, it is on his 23rd birthday.

The brothers are often in each other’s clubrooms before and after matches. Once when Tom asked Sam where he might park at Kardinia Park, recruiting manager Stephen Wells said: “Just tell him there’s a park right out the front, any time.” Another day, Geelong’s head of footy Simon Lloyd offered Tom an impromptu tour of the club.

It is not lost on the De Konings that the respective heads of the footy departments at Geelong and Carlton also are brothers, Simon and Brad Lloyd. 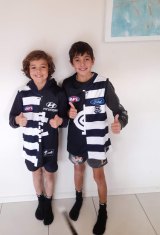 Let’s go back a step or three, as you might for a centre bounce. The De Konings are a blended family. Terry, a 40-plus-year PE teacher at St Bede’s Mentone, brought three kids to the relationship. Jackie, a performing arts teacher at Rye Primary School, brought four – and crucially, the caravan.

To these, they added Tom, Sam and Zoe. Around 15 years covers the lot. It’s a sizable chunk of humanity anyway, but most are taller than average, sharpening the crowded-house effect. They’ve got most fields covered: doctor, builder, landscaper, musician, jewellery maker, aspiring pilot, graphic designer, furniture maker, midwife and journalism student. Then, of course, there is the footy field.

“The whole 10 of them are really good friends,” said Jackie. “In their different ways,” added Terry. They often talk like this, as a team. It must be the only way to sheepdog such a big and boisterous clan.

Cornered by roaming Brian on live television one recent Friday night, they tried to name all 10, but overlooked one, Mark. The family WhatsApp group fairly buzzed that night.

The family tree doesn’t stop at the front door. Sam recently discovered that he is a fourth cousin to Toby Conway, Geelong’s first draft pick in the 2021 draft. They already knew that they were related to the McCartins of Sydney. Jackie has been told of a distant link to Don Bradman. They’re genes worth having. 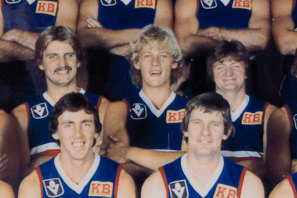 Terry De Koning (centre, back row) during his time at Footscray.Credit:Jason South

In the shuffle between parents, houses and generations, the De Konings’ growing children were only sometimes all under the same roof at the same time. But often it was eight, and on Thursday nights routinely the whole 10. Necessarily, the De Konings were strategic.

Terry: “The cupboard was full of Weet-Bix. They never went hungry.”

Jackie: “Lunch orders had to go on a roster.”

At one point, the De Konings enrolled the kids in a local taekwondo club. “The deal was that after three kids, it was free,” said Jackie. For her and Terry, it was a bargain. “We got an hour-and-a-half of the kids out of the house,” said Jackie. “And we did get three black belts out of it.”

Naturally, they were all sporty. The boys played school and local footy. 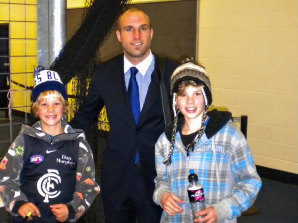 Jackie: “None of them really took the football any further.”

But Zac and Max still run around with the Torquay Tigers. Zoe, the youngest, is captain of Mt Eliza’s A-grade netball team.

As a three-year-old, Sam trailed five-year-old Tom around at Auskick. But he had his own mind already. Asked what he wanted to be when he grew up, he replied: “Better than Tom.” Asked again in grade six, he said: “A Brownlow medallist for Carlton.”

When he was drafted in 2017, his brothers threw a party for him in the city and his parents threw one simultaneously at Safety Beach. “We all went out on the deck here and sang the Carlton song,” said Jackie. “You would have heard us in Carlton.”

In juniors, Sam was coached by Adam Heath, whose daughter now plays for Melbourne. It’s why he’s not a ruckman. “He was a good coach. He taught him well,” Terry said. “Sam’s brain thinks, I’m an on-baller. I just happen to be 6′9″ now.”

When Sam was drafted to Geelong in 2019, Tom was on the spot and Terry arranged an improvised photo of the pair shaping up in their club colours, borrowing one from Sam’s fellow draftee and Tom’s new teammate Brodie Kemp. 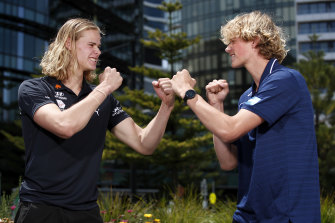 Family rivalry: Tom and Sam De Koning shape up after Sam was drafted by the Cats in 2019.Credit:AFL Photos

After five years in the system, Tom’s parents say he has made grudging accommodation with the fanfare surrounding the AFL. Sam was initially overwhelmed.

Terry: “Under the radar.”

They do care for one another. Tom had to learn how to put on weight at Carlton and one off-season told Sam he would have to do the same. Soon, Sam was eating six full meals a day. 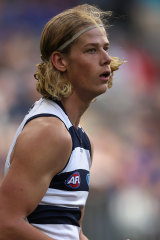 The senior De Konings are impressed by the level of pastoral care for their sons at both clubs. They’ve been warmly welcomed in themselves. At Geelong, Joel Selwood and Tom Hawkins never fail to say gidday. “Joel might be nice to you,” Sam tells them, “but gee, he’s tough. He scares me!” He hastens to add that he means Selwood’s standards, not manners.

Both De Koning boys have made splashes this season, and their parents are quite taken aback by the ever-increasing attention. “A lot of people say how great it is, and it is,” said Terry. “But all along, there’s been the adrenalin, the anxiety.

Jackie: “Both are basically in their teams now, but before that, you never knew where you were going on the weekend.”

The calls the De Koning parents fear most come during games from welfare officers Lil O’Sullivan at Carlton or Mark Worthington at Geelong. “We don’t like those calls,” said Terry. “It’s ‘Houston, we have a problem’.” But they’re glad the clubs are thoughtful enough to make them. One night, O’Sullivan drove an injured Tom home.

It’s the abiding fear of all footy parents. Late last season, Tom knocked himself out taking a huge mark over Greater Western Sydney’s Toby Greene. It was a case of the bigger they are, the harder they fall. “I felt sick,” said Terry. “I was really nauseous.” Added Jackie: “Toby Greene signalled for the trainers. I didn’t like him before, but I like him now. 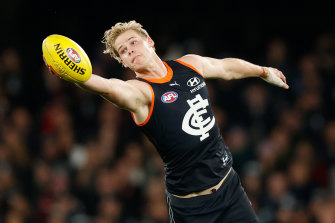 Tom De Koning in action for the Blues.Credit:Getty Images

“The biggest relief is at the end of the week and they’re both not injured.”

Summer soothes the anxiety away. “We’re very beach-based,” Jackie said. “It’s always nice down to Torquay when there’s a few of them out there surfing. It’s really bonded the kids together.”

Tom and Sam’s footy paths crossed fleetingly in a practice match last year, but on Saturday, it will be for real.

As it happens, Terry and Jackie are on a long-delayed and several times rebooked holiday, in an Australian-themed bar on an island off Bali. They’re friendly enough with the owner to know that he will show the match on several screens, and they can sit back, beers in hand, hoping for no calls from Carlton or Geelong but expecting many WhatsApp posts from Torquay.