Alex McKinnon’s desire to climb out of his wheelchair and run on to a rugby league field has never been greater than it is right now.

Not for the first time in his life, Wayne Bennett is inspiring the man whose world changed forever in that fateful tackle against the Melbourne Storm back in 2014.

Alex McKinnon’s career was tragically cut short in 2014 playing under Wayne Bennett at the Newcastle Knights.Credit:Getty

McKinnon loves Bennett. It’s why, when watching the attack on his old coach as his time at the Brisbane Broncos blew up in flames at the end of 2018, McKinnon wanted his mentor to walk away for good.

Now, as Bennett prepares to lead the Rabbitohs to a grand final against Penrith on Sunday, McKinnon wishes he could strap on the boots to play under the master coach one last time.

“I’d never really been around Wayne when he went through a period like he did, and I hated seeing him go through it,” McKinnon told the Herald of Bennett being run out of Brisbane by Broncos powerbrokers. 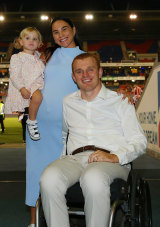 “I thought it might have been easier for him to retire — to stop taking the unwarranted criticism, the scrutiny and the media speculation. Everything that he’d done in the game, the role that he’d played, the amount of lives that he’d touched and made better … I just thought that scrutiny was so unfair.

“To be able to see him now with the energy, the passion and the drive that he’s got, it actually makes me miss playing because I know what it’s like to be in this situation to be coached by him. It really makes me want to play again, to be around the guy, because he’s that special.”

McKinnon, who has likened Bennett to a father, will never forget the actions of the former Newcastle coach in the days and months following the tackle that has since left him in a wheelchair.

The qualities he showed in McKinnon’s hour of need highlight why his players go above and beyond for the veteran coach. “The art of Wayne is his ability to give you a reason to believe,” McKinnon said. 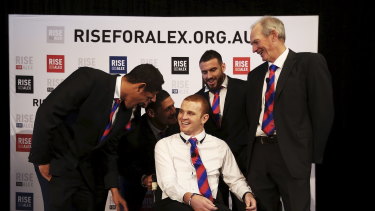 “What gave me so much confidence wasn’t the amount of times he called or the amount of things he did. It was the effect that a simple thing could have. A simple question. A simple piece of motivation. Wayne gave me a kick up the arse when I needed it. He gave me direction and challenged me at a time when I had nothing and I was at my darkest days. That is something that I will hold with me forever.

“One of Wayne’s great strengths in life is his ability to deal with what he’s got, and not focus on what he hasn’t got. He uses it in life and uses it as part of his team. He truly believes that it’s not about what you don’t have, but about what you do have. You could see that when he lost Latrell [Mitchell] and what Souths have been able to do since.”

‘The art of Wayne is his ability to give you a reason to believe.’

Darius Boyd, who was coached by Bennett at three different clubs, spoke of the difficulty of dealing with Bennett’s exit from Brisbane but elaborated on why the coach showed his true colours during his ugly break-up with the club.

“I felt torn whether to stick by Wayne, our coach, or support the club with their decision,” Boyd told the Herald. 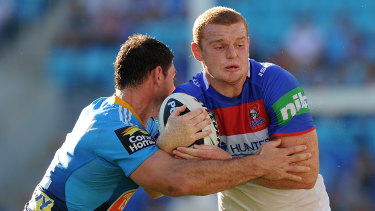 McKinnon playing for the Knights against Gold Coast on April 28, 2013.Credit:Getty

“He said, ‘Just let me handle this’. He knew we all cared about him and had his back, but he didn’t want us to stick our necks out for him. He is someone who sticks his neck out for his own players and staff, to his own detriment sometimes. But that’s why people love him. He has everyone else’s best interest at heart. That’s why he is so successful wherever he goes. People trust him. ”

“I am probably biased … but to be able to move on to different clubs and to turns things around to give them that little edge to win comps or get to the last day, it’s a special achievement. In my eyes [a win] would cement him as the greatest ever.

“Only way you can prove people wrong or silence the critics is to do what he’s done. Everyone saying he’s too old, or he can’t do this or can’t do that, he’s consistently proving people wrong. That’s what he is best at.”

A video posted on social media of Melbourne mocking Penrith players and their western Sydney roots after last year’s grand final was used as motivation to inspire the Panthers to victory on Saturday. 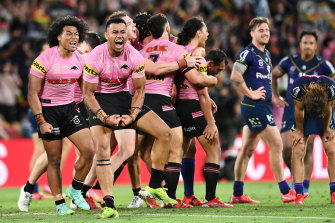 Mt Druitt residents Brian To’o and Stephen Crichton were animated after their win against Melbourne. Credit:Getty

The Herald can reveal that for the past 12 months, Panthers players have been privately fuming over a video one of the Storm players posted while celebrating their premiership triumph wearing ski goggles and popping champagne bottles in the sheds at Stadium Australia.

The video of the Storm players, which was published as an Instagram story and is no longer available for public viewing, was shown among some of the Panthers players in the lead-up to the game. 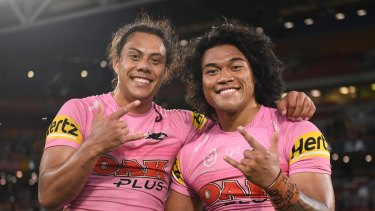 To’o and Jarome Luai, who are both part of the FTA crew, celebrate Saturday’s win against Melbourne.Credit:NRL Photos

Sources who have seen the video told the Herald that the Storm players mock those who hail from the western suburbs of Sydney — in particular, the Mt Druitt crew of Jarome Luai, Brian To’o and Stephen Crichton.

It is believed the Storm players were imitating the “From The Area” crew (FTA), a Mt Druitt-based group that many members of the Panthers squad are part of and that inspires the younger generation to chase their dreams.

It may go a long way to explaining the spray Brandon Smith copped on his way off the field in the 16th minute of the game.

The Herald has been told one Panthers player called Smith “a dog c—” from the sideline as he left the field for treatment.

“If you think there’s feeling on the field, off the field when Brandon Smith walked past the Panthers bench, to a man they were yelling out stuff that I can’t repeat because I’d lose my job,” Fox Sports sideline commentator Gorden Tallis said during the pay-television network’s broadcast. “Even off the field, it is feisty.” 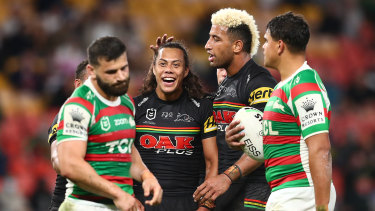 No fairytale ending for Mansour

Spare a thought for Josh Mansour. He’s worked around the clock to overcome what was meant to be a season-ending knee injury suffered playing for the Rabbitohs against his old club Penrith back in round 23.

He worked himself back into full fitness last week but Wayne Bennett is reluctant to change a winning team. What a storyline it would have been had he lined up against his old club in a grand final this weekend.

Related posts:
Previous Post: Steelers’ Ben Roethlisberger blames self for loss to Bengals: ‘Not going to point fingers at anybody else’
Next Post: Bombers back Caldwell; rule out play for Dunkley ‘at this stage’