Jayden Okunbor has called out racist abuse directed towards him on social media, declaring “I don’t understand how you can think it’s OK to attack someone because [of] the colour of their skin.”

Okunbor was responding to a series of vile slurs that he reposted to bring attention to the account they were launched from. The Canterbury winger admits his form since returning to the side from injury was open to criticism, but draws the line at racial abuse.

During the Bulldogs’ clash with the Gold Coast on Monday, which they went on to lose 34-6, Okunbor copped a tirade from someone operating under the name Paul El Azzi on Instagram.

The posts included the following:

Okunbor reposted the message to his Instagram story and added some words of his own.

Censored screenshot of racist abuse sent to NRL player Jayden Okunbor and shared by the player on his Instagram story.Credit:Instagram

“I understand playing in the NRL puts yourself out there to cop criticism from anyone with a phone,” Okunbor posted.

“I’m the first to admit my first few games back definitely haven’t been my best and that opens me up to even more criticism. I can cop some of that stuff but I draw the line at racism. I can’t understand how you think it’s OK to attack someone because [of] the colour of their skin and think you’ll get away with it.

“Wouldn’t normally do this but I’ve deleted racist messages before and I’ve had enough of it. So I’m calling this out.

“I’m not sure of your age, but whether you’re a kid or a fully grown man, you’ve got a hell of a lot of learning to do. 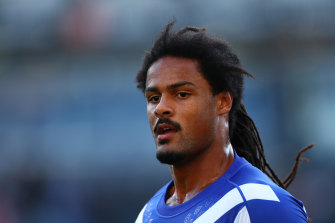 “And I can speak for a lot of people in the public eye, but also everyday people who put up with this shit from uneducated, ignorant people like you, do better.”

The incident was brought to the attention of Canterbury powerbrokers on Thursday morning. The club’s welfare team is poised to meet with Okunbor to discuss the situation.

“This person doesn’t have the right to call themselves a Bulldogs fan.”

Latrell Mitchell called out racist abuse he received on social media earlier this year, which ultimately led to the perpetrator, Daniel Robert Hudson, being fined and convicted for using a carriage service to menace, harass and offend.