Wallabies coach Dave Rennie has taken aim at the northern hemisphere nations that blocked the implementation of the 20-minute red card at Test level.

The Herald this week revealed the 50-22 kick and the goal line drop out will be trialled in all competitions around the world from August 1 for 12 months.

But the modified red card, which allows Super Rugby teams to replace a sent off player after 20 minutes, was not adopted.

It’s a decision which confused Rennie, who spoke to reporters from Sanctuary Cove on Thursday afternoon.

“We’d like to see the red card remain at 20 minutes, as we’ve seen, especially with some decisions that are made, they can have a massive impact on the game and maybe post game are viewed as not as serious,” Rennie said. “At least with 20 minutes you can even the numbers up again, so [we’re] disappointed that’s not going to be trialled from a World Rugby perspective.”

Rennie said the 20-minute red card had the support of the other SANZAAR nations but was struggling to comprehend why the northern hemisphere were not in favour of the rule change. 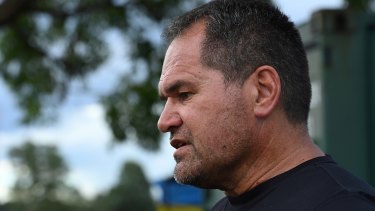 “It had enormous support in the southern hemisphere but not the northern. Not sure. To be honest, I don’t understand it,” he said. “As we know, there is a lot of emphasis now around head contact and so on. There are going to be a lot of cards.

“Individuals who get it wrong are going to get punished and spend a long time on the sideline anyway. If we can get back to 15 on 15, ideally, that’s what we want.”

Rennie also explained why Rugby Australia and the Wallabies were happy to see the 50-22 and goal line drop out recognised as steps forward for the sport.

“I think the 50-22, it’s a good rule but mainly because it’s not so much just kicking into the corner and getting an advantage from that, it means teams have got to defend it,” he said.

“And if you’ve got more back-field cover then maybe there’s more space to attack in, so I like that and I think that’s been a good addition to our comp.

“The goal line dropout, I guess historically you could have had multiple scrums and a lot of the game is chewed up from that.

“And the advantage of kicking from there as opposed to a 22, you generally kick out to halfway and the team who catches is generally attacking and we get on with the game, rather than maybe kicking to the opposition 22 and then the ball goes up in the air and you get a bit of volleyball happening.”

While Rennie is happy with the rule changes, there is cause for concern with several injuries in the Wallabies squad.

James O’Connor and Matt To’omua, Rennie’s first choice at No. 10 and No. 12 respectively, are both struggling with injuries.

O’Connor has a groin complaint which will be tested on Thursday afternoon but To’omua has been sent to Canberra to get away from the group as he completes his rehabilitation on a neck injury.

The pair will be assessed this weekend before Rennie decides whether to call upon additional players.

“It’s a possibility,” Rennie said when asked if the pair would play in the first Test against France on July 7. “Neither of them have done a lot of training with us and we have had big days. We have got through a hell of a lot of detail. And we’ve got some good, young men in this group, too. They’ll be applying pressure for selection.

“What you have to do is just plan to be without them. We will know a bit more by the end of the weekend. How Matt returns and how James recovers.”