The late Thursday phone call to Kangaroos president Sonja Hood that confirmed down-to-earth, frugal North Melbourne had won the signature of the country’s best coach Alastair Clarkson over the all-powerful cash-cow Essendon was met with delight.

It was a David and Goliath tale that has left the Kangaroos beaming and Essendon embarrassed as they head into the final round with a decision on the future of their embattled coach they humiliated this week, the contracted Ben Rutten, on the agenda at a Sunday board meeting.

The result was a victory of process over panic, decency over desperation, as the Bombers failed in a bid where Clarkson listened to what Essendon had to say while knowing in his heart the shambolic, last-minute process was unlikely to win him over.

“It was really out of respect that I listened to what they had to say. Due diligence takes a lot longer than four days, for me,” Clarkson said.

The Kangaroos understood from the start they were never going to hit a home run in their pursuit of Clarkson.

Instead, they had to move to first, second, then third base in a strategic, measured fashion and hope to bring the run home in the nervous moments that occur when the crowd starts roaring and home base is in sight.

The first meeting between the four-time premiership coach and Hood occurred at her Bayside home after the Kangaroos board decided to chase Clarkson hard to be their next senior coach when David Noble was sacked in July.

By this time Clarkson knew he wanted to coach again, the fire stoked during April meetings at the Golden State Warriors as NBA coaching legend Steve Kerr planned for the play-offs. Where he would coach remained an open question.

Hood, a fan of the club all her life, had seen Clarkson play 93 games for the Shinboners, but the initial conversation was not a hard sell as it ranged over topics relevant to life rather than football.

Everything was discussed from family, to travel, to shared values, to the effect football can have on communities and the pair hit it off.

With rapport formed between Clarkson and Hood, it was time to move on to the next step. 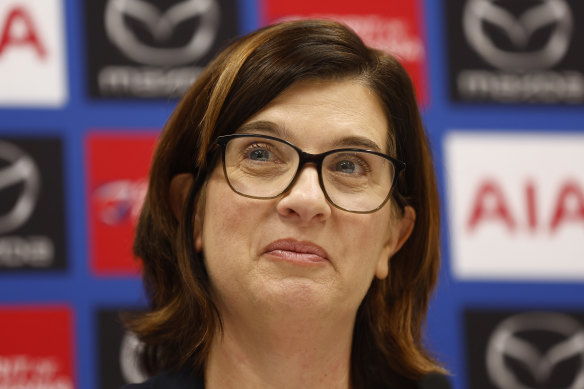 That step was about the Kangaroos providing an experienced coach who knew what was required for success with answers to a range of detailed questions. They ranged from broad issues such as the redeveloped Arden Street precinct and the club’s connection with Tasmania to more detailed subjects such as the position of the soft cap and salary cap.

There was also an assessment of the landscape, where difficult conversations might be required, the qualities of people inside the football department and the resources available.

Hood worked with members of her executive team, CEO Ben Amarfio and legal counsel James Gallagher, to provide Clarkson’s manager James Henderson with the detail he required to make an informed decision, with Greater Western Sydney engaging in a similar process as they sought a new coach.

The Giants learnt, as the Kangaroos did, about Clarkson’s philosophy around matching performance to contracts and why alignment between key pillars of the organisation was crucial for success.

A board member since 2019 and president since the start of the season, Hood is not only a lifelong fan who knew what Clarkson could offer the club she represents, she is a community-minded executive who values people and the way they are treated above all. She is also tapped into the game’s nuances and knew big-noting during the process would not help her cause.

Clarkson, although capable of being ruthless, is of a similar mind, knowing he needs strong people around him to curb his excesses, shoot down the worst of his ideas and keep him focused.

Once the broad questions were addressed, the next stage was to look closely at the team he might want to surround him. His former Hawthorn assistant and Melbourne teammate Todd Viney is a key ally he wants to run as his sidekick.

Last week as the Giants were told they were out of the running, the Kangaroos put together an offer of five years with the parameters of the soft cap curbing the scope of the negotiation. Clarkson, also drawn via an emotional attachment to the club as a past player, was on the verge of accepting the deal.

The Kangaroos had reached third base but then had to deal with a new pitcher in Essendon after they installed David Barham as president, ditched support for their incumbent and declared they wanted Clarkson.

Clarkson met the Bombers on Tuesday, telling North Melbourne he would do so, before travelling to Adelaide where he sounded out a mentor from Central District, Ken Russell, where his coaching journey begun.

On Thursday night, with clarity in his mind, he sat down with his wife Caryn and three children Stephanie, Georgia and Matthew to win unanimous approval for the course he was about to take before informing Henderson he had decided to join the minnows North Melbourne rather than egocentric Essendon.

He said he was grateful to the people who recruited him to the Kangaroos in the late ’80s at a difficult time in his life following the death of his brother.

“I needed some support in my life in that time. This club gave it to me. The shoe is on the other foot right now, perhaps this club needs some support,” Clarkson said.

At 8.45am on Friday the players were told Clarkson would be their coach, the ‘Clarko show’ to launch in a small operation in front of loyal fans.