It's hard not to watch brilliant All Blacks rookie Caleb Clarke and see him as anything other than New Zealand's next Jonah Lomu.

Since the late Lomu retired in 2002, New Zealand have been on the lookout for wingers in his mould.

Caleb Clarke was a clear man of the match in what was just his second Test with the All Blacks.Credit:AP

"He's strong. Caleb's strong. He loves to play, he gets a smile on his face and we're just trying to give him the ball occasionally and he's pretty useful," Foster said after his side’s 27-7 win.

"What a thrill for him."

If those numbers don't paint a picture of how destructive the Auckland Blues star was, it is well worth watching his run in the lead-up to Ardie Savea's second-half try. 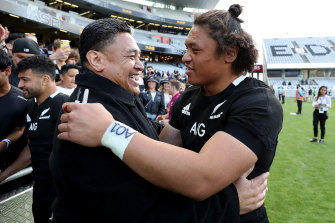 Caleb Clarke and his father and fellow All Black Eroni after Sunday’s victory over the Wallabies.Credit:Getty

A poor James O'Connor kick was caught in the middle of the field by Clarke and the 107kg winger was given a clear runway to hit top gear before meeting a scrappy Wallabies' kick chase.

Clarke beat six defenders in the next 10 seconds. Two phases later, Ardie Savea beat a Filipo Daugunu tackle and scored. It was devastating counter-attack rugby at its very best – the domain in which the All Blacks thrive.

Clarke has serious speed at his disposal but it is his unbridled power which casts the mind back to Lomu.

Clarke does use his footwork to beat defenders but he is just as happy to run straight over the top of whoever happens to be marking him.

Whether it is through power, speed, footwork, a palm or a combination of all four, Clarke's ability to beat the first defender is incredible.

"He is a very special player and a special kid," All Blacks captain Sam Cane said after Sunday's match.

"I’m stoked to see him get his first start and I think he didn’t let anyone down. He was exceptional. Really happy for Caleb and his family."

Vision of Clarke's father Eroni – who represented the All Blacks in the 1990s – was beamed onto the Eden Park big screen multiple times.

Clarke looked every inch the proud father with each shot but that won't stop him from making Caleb sit down and watch the match with him later on Sunday.

"I think I'll go home and he will probably make me sit down and watch it," Caleb said.

"That's how it's been. It doesn't matter. I could get home at (midnight) and he would make me sit down and watch it."