In the absence of a crowd, thunder did the clapping around the Tokyo Stadium, prolonging the tension as Australia prepared to defend their women’s sevens rugby title at the Olympic Games. Theirs had been a stuttering campaign already, with a pool match loss to the United States throwing them into the dangerous half of the draw with Fiji and New Zealand; the delayed start to the match was a suspension piled on top of suspense.

Australia’s women’s sevens team after their quarter-final loss to Fiji.Credit:Getty

After the 30-minute wait, Australia were run off their feet in the early stages, Fiji taking total control of possession in the opening minutes. A try-saving tackle from Demi Hayes held back the tide, but Fiji had too much ball to resist; first Alowesi Nakoci, then Ana Maria Naimasi, sliced through the left side of Australia’s defence to put the Pacific Islanders 14 points ahead.

A yellow card for a high tackle by Fiji’s Vasiti Solikoviti reversed the momentum late in the first half. Australia took advantage of their numbers, spreading the ball wide to the right for a try to Faith Nathan just before the break. But still down 14-5 when the numbers on the field returned to parity, Australia lost composure under the pressure of some bruising Fijian defence. The tackling from both sides was outstanding in this match, and another try-saver by Hayes kept Australia in the contest for the final minutes.

A runaway try by Charlotte Caslick with less than a minute remaining kept the contest alive. Fiji threatened to emulate France’s men’s team in the recent series with the Wallabies, trying their best to throw the match away when they only needed to kick the ball out, but finally they saw sense and killed the match off for a well-deserved victory.

Caslick described the match as the hardest she had ever played in: physically in the contest, and emotionally after absorbing the loss. “Fiji were really awesome … When they got momentum, it was really hard to change it,” she said. “It sucks, it hurts, but it’s only three years to Paris.” 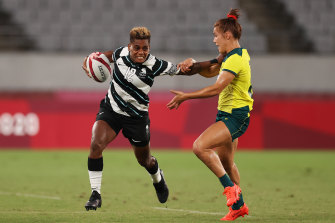 As to the Australians’ apparent loss of composure in attack when they were trailing on the scoreboard, Caslick said: “We had a mixture of players like me who like to play an up-tempo game, and some of the girls mightn’t have been ready for that. But the Fijians were playing with so much pace and intensity. We know we’re fitter and we could move them across the park and open spaces up. But in the end we played into their hands and they were better at it.”

Coach John Manenti felt that the pool match loss to the United States “took the wind out of our sails”.

“They were hell-bent on winning our pool and going through on that side of the draw, but they’re a resilient bunch and they came out ready to play. Credit to Fiji, they struck early and we had to chase,” Manenti said.

The Fijian women’s improvement in rugby sevens during this Olympic cycle has been something to behold. Australia and Fiji split their two matches in the Oceania Cup in Townsville a month ago, an early sign of the Fijian women’s progress in catching up to the standard of their men, who won their second Olympic gold medal on Thursday.

In their quarter-final, New Zealand enjoyed a virtual training run with a 36-0 win over the Russian Olympic Committee, which on this occasion was unexpectedly made up of seven athletic women in shorts. Or, in the case of the unfortunate number 5 Baizat Khamidova, who was dacked by the New Zealanders in a ruck, temporarily not in shorts.

Australia were left in a state of disbelief. Over the past two years the Australian women’s sevens team had been plundered by other codes, such as AFL and rugby league, throwing the focus out for the Olympic program, but Manenti refused to blame this for the defeat.

“Women’s sport is growing all the time and we have some of the best athletes in the world, and rightly other codes want them,” Manenti said.

More disruptive, he said, was the lack of international sevens Australia had played during the COVID-19 period.

“The twelve months’ extension meant that some of our high performers from Rio couldn’t make that extra year, so that hurt us, that and not being able to blood our younger players with international experience,” he said. “It’s a sign of the times.”

A visibly upset captain Shannon Parry said she was “distraught”. “You put five years into something and it’s gone like that,” she said.