Wallabies coach Dave Rennie has broken Australia’s silence over Nic Berry’s treatment at the hands of sanctioned Springboks coach Rassie Erasmus, saying the referee “needs to be treated better than that”.

Rennie said he had not read the details of the two-month ban handed to the World Cup-winning Springboks coach on Thursday but condemned Erasmus’ targeting of Berry in the long video that sparked the misconduct investigation.

Nic Berry awards a penalty to the Lions in the first Test in July.Credit:Getty

“All I’ll say is at the time it was hugely disappointing. I think Nic’s a fantastic referee, a good man, so disappointed with how he was treated,” Rennie said in Cardiff.

“As to any sentencing or what’s come out I haven’t read the article but I felt Nic deserves better, needs to be treated better than that, and maybe there’s more to come yet.”

It was the first public comment from an Australian official or staff member since World Rugby published the findings of their lengthy probe into the matter centring on Berry’s officiating of the first British and Irish Lions Test in South Africa last year. 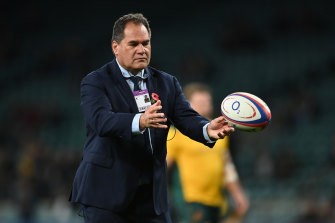 Erasmus and South African Rugby are appealing the decision, which saw the coach banned from all rugby activities for two months and all match-day activities until September 2022.

He was found guilty of several misconduct charges over the publication of a 62-minute video attacking Berry after the Springboks lost the first Test 22-17.

After the verdict, the former Springboks coach, who is now South Africa’s head of rugby, published a meme appearing to make light of the ban, an image of him camouflaged as turf and trying to communicate with fullback Willie Le Roux.

But the panel’s findings, outlined in an 80-page document, make for sober reading.

In particular, a statement from Berry labelled Erasmus’ video “character assassination”. Berry said his reputation suffered “immeasurable damage” as a result of the clip, which went viral and was found by the panel to have been published “by or at the behest of” Erasmus.

The South African Rugby Union, who were found to be supportive of Erasmus’ rant, were also fined $37,000 for failing to keep Erasmus in line with World Rugby’s code of conduct.

In addition to repeatedly criticising Berry’s performance, the World Rugby committee found Erasmus threatened Berry with the prospect of making the video, in which he slammed 36 different decisions.

One day after the Springboks dropped the first Test 22-17, Erasmus called Berry.

He then emailed the Australian, writing: “We feel the pressure which the lions attempted to put on your team of 4 through media did actually work well for them!! While we will be doing the same this week I think you will note that ours is more factual and honest!!”

Berry gave powerful evidence during the hearing, describing the toll the video has taken on his family. 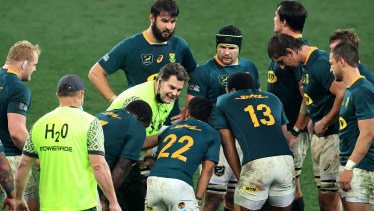 Director of rugby Erasmus runs the water for the Springboks during the Lions seriesCredit:Getty

“Due to the actions of Mr Erasmus, my family and I have endured a significant amount of distress and we will only have negative memories of the whole experience. I feel that Mr Erasmus engaged in a character assassination of me on social media,” Berry said.

“I have spent many years trying to build my reputation as an international referee and in the course of his video which was posted online, Mr Erasmus has caused it immeasurable damage … I feel that regardless of the outcome and any sanctions imposed, my reputation as a referee and person will forever be tarnished.

“I felt that Mr Erasmus’ video brought into question my professionalism and my integrity as a match official and that there was an inference to be drawn that I was in some way cheating as an official, which is obviously completely untrue.

“My reputation throughout the rugby community has suffered immeasurably from his actions and I acknowledge that the impending investigation will likely lead to more public scrutiny and unwanted media attention.

“However, his actions are against everything our game stands for and I feel it’s important to take a stand against such behaviour.”

The ban means Erasmus can take no part in the Springboks’ clash with England this weekend, next year’s Rugby Championship nor the inbound July series against Wales.