It’s draft day 2005. Moments before Collingwood are to make left-field selections that would set up their next successful era, recruiting manager Derek Hine briefs then club president Eddie McGuire on the Magpies’ unorthodox strategy.

“I remember him saying to me ‘we’ve got pick two and we’ll get Dale Thomas instead of Xavier Ellis. There’s another kid. If we only had one pick, we’d go for this bloke. But we’ve got two and I reckon he’ll be there. He has a basketball background, there’s something about him, I think he could be one of the greatest players ever.’ ”

Scott Pendlebury becomes only the 20th player to reach 350 games this weekend.Credit:Paul Rovere

“I said ‘gee, you’ve talked him up.’ He said ‘he could be something absolutely special.’ I said “what’s his name?” he said ‘Scott Pendlebury.’

“Sure enough, Derek Hine has never said anything more accurate in his life.”

Publicly, Hine was more subdued with his assessment.

“We’re really pleased to get Scott Pendlebury. He’s a 190-centimetre midfielder and we think he’s got enormous scope for improvement,” Hine said. “But already he holds the ball really well and just finds time to use it.” 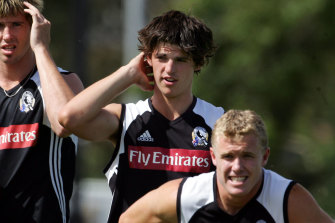 Nearly 17 years and 349 games later, a compelling case can be made that Pendlebury, who many recruiters at the time were shocked was selected so high, is the greatest player to have donned the black and white in the AFL era (from 1990).

With honourable mentions to Tony Shaw and Peter Daicos, who played the bulk of their careers in the 1980s, it’s a race in three between Nathan Buckley, Dane Swan and Pendlebury.

As is often the case in these best-ever debates, it is in the eye of the beholder. Do we judge each on their absolute best, or should the overall body of work take more importance? Buckley, with a Brownlow and Norm Smith Medal and more All-Australian selections and best and fairests, has the most individual accolades, but what weight is put on the prize he cherished most – an elusive premiership? How important are aesthetics? And leadership?

At their absolute best, Shaw rates the more powerful duo of Buckley and Swan ahead in that order, but for longevity Pendlebury sits on top.

On Saturday, Pendlebury will become only the 20th player to reach the 350-game milestone. He broke Shaw’s club games record in 2020, which stood for 26 years. Pendlebury’s mark will also stand the test of time.

In his 16 completed seasons, he has finished in the top three of the Copeland Trophy 13 times. As the AFL pointed out this week in a media release outlining some of Pendlebury’s records, only Gary Dempsey (15 at Footscray, North Melbourne) and Kevin Murray (14 at Fitzroy) have bettered this – though neither played in as strong eras for their clubs. No Collingwood player has polled more Brownlow votes.

“I still think Buckley on his day would be more devastating but gee, you’re plucking straws out of somewhere,” Shaw said. “Swanny could be ballistic at times and Bucks the same, but it’s not always about who could have it on their best day.

“In terms of longevity and level of performance, he’d [Pendlebury] have to be the greatest, I’d reckon.”

Nick Maxwell, the Pies’ last premiership captain, is in awe of Pendlebury’s consistency at the top.

“It’s what pushes his nose ahead against his two competitors,” Maxwell said. “If you’re taking in the full consistency over that whole period, to be in the top every year – that’s in teams that haven’t played finals and teams that have won premierships and played off in grand finals, that’s just unbelievable someone can do that.”

Collingwood’s three modern-day great midfielders played the position in different ways. Buckley, with his jumper tucked in and socks pulled up, was the classical footballer – strong and powerful with the ability to lace out 60-metre passes. Swan may not have looked the part with his shuffling gait and ungainly kicking action but certainly played the part. He had the nous to find the ball.

Pendlebury is the artist who has the knack of making time stand still. His well-documented basketball background has undoubtedly developed his spatial awareness, enabling him to hit most targets by hand or foot.

“He talked early on about the influence of [former St Kilda coach] Alan Richardson,” Maxwell said. “He [Richardson] taught him to fake the handball when he’s assessing what’s in front of him.

“That bought you an extra second, half the attention would go where they thought you would handball it. Everybody else would be moving around him and he would be almost remaining still.”

Though Buckley and Swan were more penetrating kicks, Pendlebury’s footwork is deft, allowing him to find teammates in pockets of space others cannot see.

“Scott is more creative in seeing space that way,” Maxwell said. “If you’re talking about cricket, Bucks is the Glenn Maxwell who can blast it, Pendles is like Michael Bevan, who can chip it into space, take the two or three rather than try and whack a six.”

All were big-game players. Swan ruled the field on Anzac Day, Pendlebury and Buckley excelled on grand final days.

As leaders, Pendlebury and Buckley both developed with age. Buckley has acknowledged he changed his approach once he realised his confrontational style jarred with teammates. Pendlebury, appointed as a deputy vice-captain as a 20-year-old, was wary of imposing his views on older players. His leadership grew once he realised the effect he could have on others, Maxwell said.

“Early on he was a bit more being the best player he could be, then he realised the influence he could have dragging people with him,” Maxwell said. “He’s done it for so long he’s someone who I’m really proud of the way he’s developed in that part and become a better leader every year he’s played, in my opinion.”

Just as a parent cannot choose a favourite among their children, McGuire will not rank the Pies greats, but he had this to say about Pendlebury: “I was told Jock McHale told Bob Rose he was the best player he saw,” McGuire said. “And Bob Rose said Bucks was the best player he saw, and I reckon if they saw Scott Pendlebury’s career they’ve got another one to stick up there.”