Harlequins 27-27 London Irish: Eager Exiles burst out of their Covid isolation to produce 12-point comeback to snatch a late draw with careless Quins

London Irish burst out of their Covid isolation to snatch a dramatic late draw at Harlequins in their first league match for a month.

The Exiles were 12 points behind with 18 minutes left but a try from Albert Tuisue and a last-minute leveller in the form of a converted Ollie Hoskins score gave them three points to move up to 10th in the table.

They could have won it after the clock went dead but Paddy Jackson missed a penalty from halfway, having missed two conversions earlier.

Quins led 27-15 at one point. Marcus Smith took 17 points, including a try, and Mike Brown and Scott Steele also scored.

But they were reeled back in by Irish, who had seen their last two Premiership games against Bath and Northampton cancelled due to Covid cases in camp.

‘We haven’t had a game for a few weeks now, so to be able to fight through those last minutes was important for us,’ said Irish head coach Les Kiss.

‘It’s been tough and frustrating — we had teams to play but the games were called off. The guys deserve a lot of credit for keeping themselves going in isolation.

‘It’s a nice reward today — there is disappointment that we didn’t win, but we understand what we’ve come through.’ 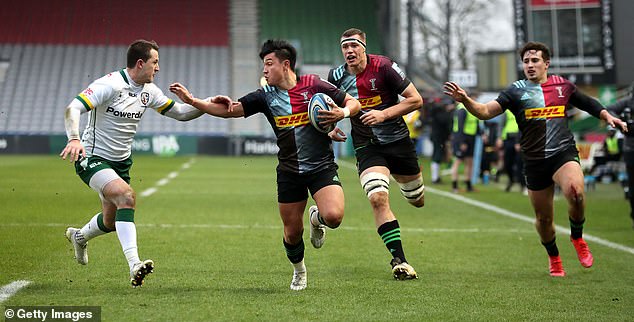 For Quins it was another result thrown away.

Their boss Paul Gustard said: ‘When you get to 27-15 with 15 minutes left you have to see that game through.

‘We have tried different things but we make too many simple errors and are the architects of our own downfall.’

With Irish without a league game for 35 days, and Quins missing their trip to Worcester in the last round due to Covid, both teams came ready to play.

That intent created a loose but entertaining half in which there were four tries — two per side — although oddly the game lacked sustained quality.

With both teams missing games due to Covid, they produced an entertaining game

Smith quickly took a penalty, try and a conversion to cancel out Curtis Rona’s converted score. And when Brown dived over opportunistically Quins led by 10.

After the interval he and Smith exchanged penalties as the game spluttered along, punctuated by dropped balls and avoidable mistakes.

By the hour mark, Irish had brought on the cavalry in Agustin Creevy, Rob Simmons and Sean O’Brien — the Test trio with more than 250 caps between them — but they could not stop Quins scoring a converted third through former Exile Steele. 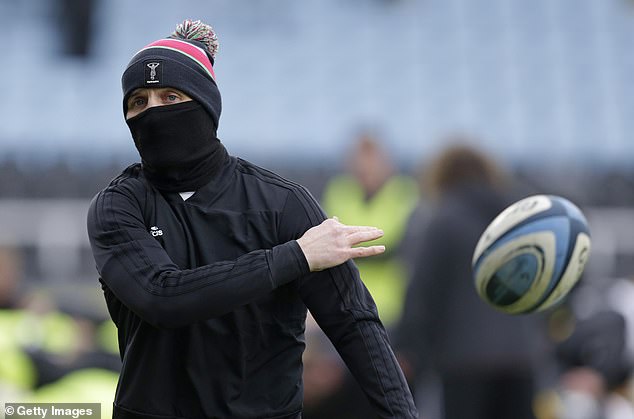 Then came the typical Quins wobble. Archie White was sin-binned for a deliberate knock-on, and soon Irish No 8 Tuisue picked a fine line for his try.

Jackson missed the conversion, meaning the Exiles needed a converted try to draw.

Up stepped Hoskins, peeling off the back of a maul, with Jackson adding the vital extras.