As expected, it was a close and enthralling battle for the AFLW grand final, between the two standout teams of the season.

It was a perfect day for footy in Adelaide. The Crows got off to a dominant start, controlling the territory and pressuring Melbourne into turnovers. But they couldn’t convert that into scoreboard pressure. It took a strong, contested mark on the goal line from Jasmyn Hewett, nine minutes into the first quarter, to open the scoring. In a mark of Adelaide’s depth, Hewitt was only in the side as a replacement for the suspended Montana McKinnon. It goes to show just how strong Adelaide’s list is. Now they’ve won a third grand final in six years – they are formidable opponents.

In the second quarter, Adelaide again controlled play. The Crows’ defence, led by Sarah Allan and Chelsea Randall, set up well behind the footy, repelling any forward-half surges from Melbourne. This made it difficult for the Dees to play the ball in their front half, which limited their scoring opportunities. It was Randall who also had the big job on in-form forward Tayla Harris, keeping her to zero scores and five touches. Harris has given Melbourne an extra dimension up forward since joining them in the off-season from Carlton. She doesn’t often get out-marked, and usually brings the ball to ground if she can’t hold the grab, which allows the smaller forwards to swoop. But Randall was able not only to nullify her, but rebound with the ball and do damage going forward for the Crows.

Up the other end of the ground, Dees defenders Libby Birch and Gabby Colvin were holding up well, but it was the experience and class of Erin Phillips that helped the Crows to a 17-point buffer. Phillips was quiet at the start of the game, but she doesn’t need to have a lot of the ball to have a big impact. She’s clean under pressure and damaging with her disposals. If it is the last time we see Phillips in Crows colours – Port Adelaide are coming into the competition next season and her father’s storied history with the club would be a big lure – it will be a big loss for Adelaide. She was crucial on Saturday. 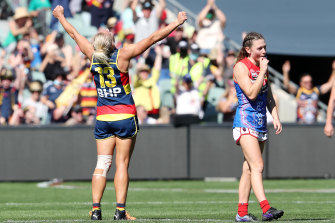 Erin Phillips will be a big loss for the Crows if she does decide to move to Port Adelaide.Credit:AFL Photos

Late in the second quarter, Alyssa Bannan gave Melbourne some confidence going into the main break by kicking a much-needed goal and showing the competition why she is one of the most exciting prospects. The Demons’ game style has allowed her to get out the back and burn opponents with her electric speed. She was able to do just that in the preliminary final win against Brisbane a week earlier, but was stifled for the most part by Adelaide on Saturday. However, she’s taken her game to another level and has impacted games more consistently this season.

Although Adelaide were able to hit the scoreboard early in the third term, courtesy of a great mark in the goal square by Danielle Ponter, it was Melbourne’s turn to dominate the game. They increased their pressure around the ground, laid big tackles, and moved the ball more freely going forward. The game’s intensity had lifted, and Melbourne started to get the game looking how they wanted it to look, controlling forward-half territory and creating several scoring opportunities. As has been the case all season, Melbourne coach Mick Stinear wasn’t afraid to throw Daisy Pearce down back, which created a lot more rebound and her smart ball use started the Dees’ offence.

Like Phillips, there has been much discussion about Pearce’s future. Will she play on in the hope of winning a premiership? If she is to continue on, it’s a great result for Melbourne. She leads them incredibly well; she’s one of those leaders that doesn’t necessarily need to touch the ball to show the way. She can use her experience and knowledge to make her team better. It will test the club’s leadership if she does go, but there are some young up and comers who can step up if she does – someone like Tyla Hanks comes to mind.

The final quarter was much the same as the third, with Melbourne pressing hard and giving their forwards opportunities to score, but they couldn’t capitalise on their dominance. While Pearce and Karen Paxman stood up for the Demons, Adelaide’s victory came off the back of the dominance of midfield pair Ebony Marinoff and Anne Hatchard, as well as the rebound off half-back from Randall and Allan. Like all great teams, the collective buy-in and each individual playing a role is what leads to success for the Crows.

Now the season is done and dusted, and the next one is not too far away. Will Phillips head to Port Adelaide? Will Daisy play on? I don’t have the answers, but as we approach the sign and trade period and with all 18 clubs in the competition next season, it’ll be an exciting few weeks. Clubs will be scrambling to save their players from rival clubs and the new teams look to poach some of the best talent this competition has to offer. Bring on August.

Related posts:
Previous Post: Fury vs Whyte marred by disputes but all will be forgotten on April 23
Next Post: Aaron Ramsdale admits faltering Arsenal ‘not good enough’ in Brighton defeat