Israel Folau will be greeted with rainbow flags by members of a gay rugby club with a transgender captain when he makes his first appearance on English soil for Catalans against Hull FC on Sunday (2am Monday morning AEDT).

The cross-code star and fundamentalist Christian recently became the most contentious signing in Super League's 25-year history after joining the Dragons on a one-year deal.

After being thrown out of rugby union, the 30-year-old centre was banned from returning to rugby league in the NRL.

Israel Folau can expect to run out to some pantomime booing in Hull.Credit:AP

There were, though, no such barriers to moving to Super League to the disgust of many, not least Keegan Hirst, the former Wakefield player who came out in 2015.

"We came to the wrong conclusion and I think it was a sad day for Super League," said Robert Elstone, Super League's executive chairman, admitting the furore had cost him sleep.

There is a long road to redemption as Tyson Fury, who previously voiced homophobic views but regained the heavyweight world title last week and is now being hailed as a sporting hero, can testify.

But as debuts go, scoring a try in a home win against Castleford a fortnight ago was perhaps as much as Folau, or Dragons coach Steve McNamara, could have hoped for.

Folau seems certain to be cast as pantomime villain by the people of Hull at the KCOM Stadium this afternoon.

Ian Farrugia is a Hull FC supporter and member of Hull Roundheads, a gay rugby union club formed in August 2018 who last year won a Special Equality and Diversity Award at the Yorkshire Volunteers Awards.

Farrugia told London's Sunday Telegraph: "Folau has basically said you're going to hell for something you can't control – your sexuality – so a number of us from Roundheads will be at the game specifically to show support for the LGBT community.

"There might be a pantomime boo and jeer for Folau right at the start of the game but I think that will be it. 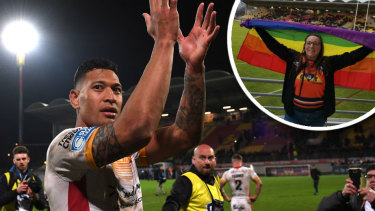 Folau and inset, a fan displays a rainbow flag on his debut for Catalans Dragons in Perpignan.Credit:Getty/Twitter

"We will proudly display our rainbow flags and there will no doubt be others as there is a huge gay scene in Hull. Our captain, William Bourne, is a transgender male and had previously played in a women's team.

"Becoming a part of the Roundheads has given him the acceptance and confidence to be comfortable in his own skin, like many in our team."

Karen Horton, vice-chair of independent supporters group FC Voices, agrees there is unlikely to be a widescale protest against Folau.

She told London's Telegraph: "My son is gay and when Folau joined Catalans my initial response was one of anger.

"My son was quite upset with his comments but I said to him that there will probably be Polynesian players within Hull's squad who probably have the same religious beliefs as Folau. The big difference is they haven't damned gay people to hell on social media.

"There are players who have played in Super League and still do who have done far worse than voice a vile opinion."

Indeed, misdemeanours involving Super League players past and present range from cocaine use, assault, domestic violence, drink driving and even lewd behaviour with a dog.

Many of the miscreants apologised and showed genuine remorse but Folau has not removed his post.

Farrugia added: "Rugby league and union are such inclusive sports and everyone involved in our club feels happy with who they are. But if you're struggling with your sexuality and the sport you love approves a guy who says 'you're going to burn in hell'… what message does that send out?"

What cannot be denied is Folau's natural talent. "He could be Man of Steel," predicted Hull coach Lee Radford. "He's multi-talented in union, league and AFL.

"He'll get the same moans and groans as what anybody playing for Hull KR would get, I imagine."

Pantomime season beckons in Hull on Sunday – albeit a few weeks late.