The biggest football crowd at the SCG in 17 years was crying out for a hero. They were watching their team spluttering towards the finish line from a Port Adelaide side finishing like Kiwi. What a time for Lance Franklin to come and save the day.

Lance Franklin celebrates one of his five goals.Credit:Anthony Johnson

The doubters had thought Buddy’s best was behind him but he produced one of the best performances of his fabled career on Saturday to lift a Swans side off the canvas to topple ladder leader Port Adelaide.

In one of the most thrilling matches of the year, it took a superlative second half by the highest-paid player in the game for the Swans to sink the league’s fairytale side, who lost no admirers.

If Sydney was not in love with Franklin before they will be now. The $9 million man bagged Sydney‘s last five goals of the match to turn what was appearing to be heartbreaking loss into a stirring victory.

The Swans were running on fumes in the last quarter against a side that, under Ken Hinkley, has rightfully earned the reputation for being the best finishers in the game. 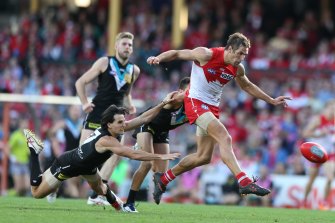 Despite being double teamed for large periods of the game, Franklin collected 23 possessions and bagged five goals. He could have had two or three more.

As he did against Hawthorn, Franklin was influential early but had four behinds to half-time. However, two goals in quick succession in the third quarter rocketed him into another stratosphere.

But it was Franklin’s efforts in the last that sent the bulk of the 41,317 at the SCG into delirium.

His 70-metre Hail Mary, when his opponent zoned off thinking he could not kick it that far, was equalled by a clutch 50-metre bomb that put the Swans 13 points in front entering time on.

It was a buffer they needed as Port never gave up, closing within five points with 17 seconds remaining.

It was not until Sam Reid punched through a behind with only seconds remaining that the Swans had the game iced. 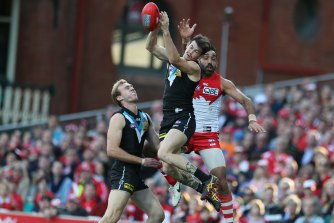 It was a case of how far Sydney early as it dominated general play only to be let down by some poor finishing.

After opportunist goals to Kieren Jack and Jarrad McVeigh inside the opening few minutes the Swans piled on nine consecutive behinds.

Had they converted even half of these the game could have been over by quarter-time.

The chief offender was Franklin, who, despite being double teamed inside 50, still managed three shots at goal but was unable to find the target.

Port, as expected for the ladder leader, warmed to the contest in the second term. It coincided with a slight drop in intensity from the Swans, who now were being beaten out of the middle.

Port ruckman Matthew Lobbe began scoring some decisive wins against Tom Derickx, and the likes of Brad Ebert, Travis Boak and Ollie Wines were the beneficiaries.

One close-to-perfect play started by Lobbe from a centre clearance sparked a chain of handballs that resulted in Matt White kicking his second goal in a minute, and Port’s third on the trot.

The Swans needed a spark and, as it has so often over the past 15 years, it came from Adam Goodes. 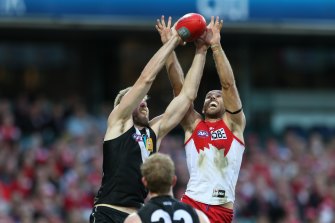 This time it was not from a dashing run through the middle or a clutch mark but three opportunist’s goals in the quarter, including two snaps on his non-preferred left boot, against the flow of play.

Sydney made several spurts in the third quarter, getting as much as 21 points in front, but the scoreboard was proving a false economy.

Sure, Franklin was having his best part of the game, kicking two in quick succession, and Josh Kennedy managed to roll one through like a golfer with the perfect read, but Port was getting on top.

Whereas Ebert, Robbie Gray and Boak were running on top of the ground the Swans midfield, possibly feeling the effects of a tough slog against Gold Coast and a six-day break, were running out of gas.

Port won the possession count by 17 and laid five more tackles but were wasteful in front of goal.

However, a goal to Chad Wingard in the closing seconds of the third gave them belief, which transferred well into the last quarter until Franklin’s divine intervention. 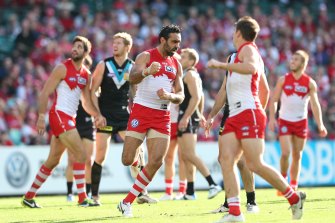