AND WE thought we would never hear Gold Coast sing its club song this season, as dreadful as it is, but we did.

Elated Suns players celebrate after their first ever win.Credit:David Mariuz

As the Suns savour every great moment of their stunning three-point win over Port Adelaide, coming from 40 points down at the 28-minute mark of the third quarter and watching Port‘s Justin Westhoff miss a set shot for goal from 50 metres after the final siren, it must be with some disbelief, even though promising signs have been emerging for the fledgling club.

As for Port Adelaide, it was left embarrassed and in despair. Asked if the defeat made Port the AFL’s laughing stock, coach Matthew Primus replied: “Yeah, for sure.

“We have got to delve real deep into the psyche of our club and understand why we produce these kinds of results,” Primus said. 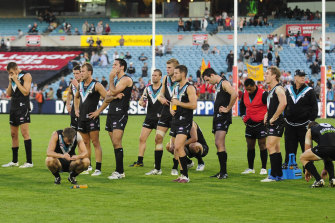 Dejected Port players after the loss to the Suns.Credit:David Mariuz

“To our supporters and sponsors, we apologise for that and we’ll keep delving away to try and produce 22 [players] that want to compete on a weekly basis.

“It doesn’t do wonders for the morale of the club . . . We have a brand that hasn’t been well thought of for a couple of years now and we are going to sort our way through it.”

Ultimately for Gold Coast, though, it all got down to trust in each other.

The statistics were saying that whenever Port or the Suns were winning the contested possessions they were able to kick goals, so coach Guy McKenna drummed this into his men at three-quarter-time. He also reminded them of what former Collingwood player Shane O’Bree had said: that based on earlier games, Port would have extra men in defence and therefore there was a need to play one-on-one. 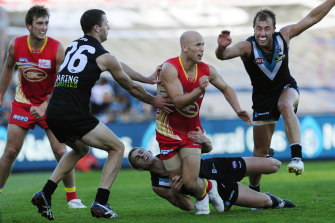 The information was spot on and so the Suns stole a memorable win. However, it also took a lot of courage and self-belief and, according to McKenna, no one epitomised this more than Michael Rischitelli, who was accidentally hit in the head by teammate Karmichael Hunt during the first quarter.

Rischitelli was hurting, but, in McKenna’s words, he just got on with the game and was one of the best on the ground. His was one of many examples of exemplary courage.

After an average first half, Gary Ablett stood up to the challenge and virtually willed his teammates to victory. And who said Hunt couldn’t play our game. He was tough and cool under pressure, and showed he can develop into a fine footballer. 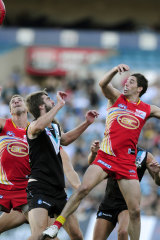 The so-called kids grew in stature with every comeback goal – eight of the last nine. Among them was Brandon Matera, who a week earlier had copped the wrath of his coach for not going in hard enough for the ball. Yesterday, he burrowed fearlessly into a pack and somehow flicked the ball out to Luke Russell, who goaled with a left-foot snap to put the Suns in front for the only time.

In the remaining five minutes and three seconds, the Suns could have sealed it but Harley Bennell missed under pressure and then Port‘s Cameron Hitchcock agonised after missing two opportunities.

Then came Westhoff’s decisive miss, leaving those who had backed Port at $1.03 to shake their heads while the fortunate punters who took the Suns at $12.50 were laughing.

The unfolding drama largely hid the fact that, for three quarters, Port was the better side. Overlooked was Daniel Motlop’s fine team game and four goals, and a superb effort by Hamish Hartlett. Also forgotten was the fact that the Power battled without key ruckman Dean Brogan, a late withdrawal with an ankle injury.

This was a win for character and the “boys”, as McKenna so often called them, stood up as men — young guns like 206-centimetre ruckman Zac Smith, who is destined for greatness, and forward Trent McKenzie, who recovered from a woeful mistake that cost a goal to be an integral part of an unlikely win.

Heroes, the lot of them, but if you believe McKenna it was just a win and another battle is to be fought next week. Hogwash. This wasn’t just a win, it was the making of a club.

Gold Coast: Shaw (ankle), replaced in selected side by Weller.

Port Adelaide: Brogan (ankle), replaced in selected side by Stewart.

Gold Coast‘s Michael Rischitelli was awarded the Peter Badcoe Medal after the game for his outstanding performance. Judged on the spirit of Anzac Day, the medal was presented in honour of Badcoe, who was killed in action during the Vietnam War and received the Victoria Cross. This was the eighth time the Badcoe Medal has been presented and only the second time to a non-Port player, joining St Kilda’s Lenny Hayes in 2009.

One would expect that every Gold Coast player would be safe from the selectors’ axe for next week’s game against Essendon, but not so. Coach Guy McKenna explained that history told the Suns that a first-year AFL player could normally last only 12 games because of the sudden increase in physical demands and they needed resting. McKenna will rotate his players throughout the season and expecting to be promoted for his first game this week is Sam Day, a South Australian centre half-forward who was outstanding in the Suns’ reserves.

Gary Ablett had numerous opponents, starting with Matt Thomas, Tom Logan when he went forward, and Brett Ebert. After a tame first half with 10 disposals, Ablett set the Suns alight in the second with another 16. Ebert had 11 in the first half, but only three in the second.