FREMANTLE’S season of near-hits and agonising misses continued at Subiaco yesterday when the demons of the past two matches came back to terrorise it in a gut-wrenching final few minutes of the match against the Western Bulldogs.

The Dockers led by 19 points early in the last term before old stager Jason Akermanis and the multi-skilled Adam Cooney orchestrated a fightback that left the Dockers’ season in the gutter.

In the white-knuckle final few minutes, Fremantle’s Heath Black and Michael Johnson were caught in possession as the frantic Dockers tried to free the ball up across half-back.

The Dogs, though, had the Dockers under lock and key in the final five minutes after Chris Tarrant, Jeff Farmer and Matthew Pavlich all had scored goals to give the Dockers the biggest lead of the match.

Big margins, though, are something Dockers fans never feel comfortable about.

Bulldogs coach Rodney Eade, vocal and animated during the first-quarter break, provided the matchwinning move in the last term when he swung Akermanis into the midfield and Cooney to full-forward. 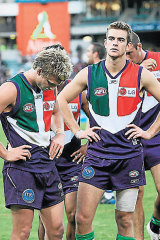 Aka was a jet. He continually won the ball from the centre square, and his delivery was better than Australia Post.

With skipper Brad Johnson relatively quiet, Cooney’s aerial strength and mobility worried Luke McPharlin and the Bulldog’s two goals – the 15th and 16th – were key components of the victory.

While the Bulldogs remain unbeaten, they were far from convincing, apart from the last term when the big guns wielded an influence.

It was another tragic end in a tragic season for Fremantle but the Dockers took heart from the club debut of Kepler Bradley, who appears almost to be an accidental hero at times, and the continued excellence of Rhys Palmer and good work of Garrick Ibbotson.

Michael Johnson and Roger Hayden were outstanding in defence, while Tarrant has rarely had a greater influence on a game.

But, for all that, some critical errors at crucial times – none more so than when Steven Dodd’s senseless push on Lindsay Gilbee caused the umpire to overturn a 50-metre penalty – proved fatal.

Both teams made changes to the announced line-ups, with Tom Williams replacing Tim Callan for the Dogs, while the Dockers swung Brett Peake in for Andrew Foster. Peake started on the bench but had an impact with his running capacity in the first half while Williams’ game was blighted by a few howlers in defence.

He was no orphan. Cameron Wight’s shanked pass across goal fell into the grateful arms of Pavlich, who goaled from the square.

Fremantle’s first three goals came from defensive lapses from the Bulldogs, who received a blast from Eade at quarter-time.

The third-placed Bulldogs were a point up but played with far less authority than they have all season, fumbling and showing little of the flair that has buoyed supporters.

The pair had an influence through the midfield but the Bulldogs’ prime movers came in attack, where Akermanis and Robert Murphy troubled the Dockers’ defence.

Murphy kicked two goals on Dodd in the first term, while Akermanis also booted two in the first half. While some around him struggled with their skills on a cloudless Perth day, Akermanis invariably chose the right option at the right time and executed brilliantly.

The Dogs took a 13-point lead midway through the second term but hard running from Hayden in defence, along with in-and-under efforts from Palmer and Peter Bell, provided Fremantle with enough possession to make a surge.

The Dockers’ sometimes-maligned recruits were especially prominent, with Tarrant booting two first-half goals and his pass just before the half-time siren found Pavlich, who goaled. It gave the Dockers a one-point lead at the big break and the home team grabbed the momentum in the third as the conditions started to tell on the Dogs.

Palmer and Hayden continued to break the lines, while Peake, not known for his kicking, booted two goals on the run to give the Dockers a three-goal cushion at three-quarter-time.

Tarrant and Pavlich both booted their third goals for the term under the strong ruck dominance of Aaron Sandilands.

Murphy slotted his third for the term, while Brad Johnson kicked his first but the skipper had little impact on the game.

Fremantle made the first surge in the final term but it seems no lead is big enough for the Dockers.

Jason Akermanis reminded everyone of why he won a Brownlow Medal. His use of the ball was first-class and ensured the Dogs had chances to score. The former Lion kicked three goals, set up two more and also had 19 disposals in a best-on-ground performance.

Chris Tarrant repaid the faith shown in him by Fremantle’s coaching staff with four goals. The All-Australian forward kicked a major in each quarter. He kicked soccer goals, bananas and set shots. Tarrant also set up two goals for Matthew Pavlich in his best game for some time.