After all the hype, club and teammates do Archer proud

Did the Kangaroos find something special for Glenn Archer’s 300th or was the hype just another obstacle to performing at their best?

THIS match will be remembered only for two things. That it was Glenn Archer’s 300th and that Drew Petrie, a journeyman forward and defender who had scored only 80 goals in his previous 118 games, kicked six goals in the first quarter.

Oh, and as a consequence of Petrie and arguably Archer, that the Kangaroos were victors.

Andy Warhol famously said that everyone gets their 15 minutes of fame. For Petrie, it was about 20 minutes in the first quarter, during which he slotted 6.0. He took one hanger and another couple of extremely powerful marks, snapped one on the left, and just couldn’t miss. He was, as he said, “in the zone”.

Archer has had more like 15 years of Warholian spotlight, but the focus on him was never so intense as during the past fortnight. In fact, it’s doubtful that any 300th game before has been as celebrated as Archer’s, a quietly spoken humble bloke who was embarrassed by all the attention he received.

Consider the cavalcade: 300 kids wearing No. 11 formed a guard of honour. About 25 ex-premiership teammates or decorated Roos turned up and later stood on the podium for a presentation from Wayne Schimmelbusch, whose games record Archer is scheduled to surpass in seven weeks. 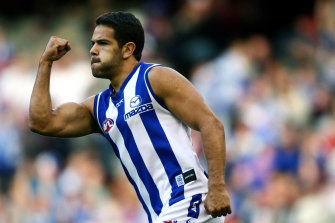 Sav Rocca, now a budding National Football League punter in America, made the journey from the US; Peter Bell flew across the Nullarbor after playing for the Dockers late yesterday.

Mick Martyn, John Longmire, John Blakey, Corey McKernan, David Dench, Allen Aylett, John Law, John Dugdale and – naturally – Anthony Stevens were among the others sharing the stage. Wayne Carey was in the 3AW commentary booth and was to attend the post-match function.

Archer’s four kids ran out with him. Thousands of fans held up the “Archer 300″ cards distributed by the club. That’s after a fortnight of build-up, dozens of articles and interviews.

It had become an ordeal for Archer, who said he understood now what it was to be a world-class tennis player. 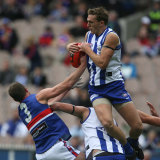 Drew Petrie marks and goes on to kick his 3rd goal.Credit:Sebastian Costanzo

“I know he’s been a bit embarrassed by it all and probably wished it would be over a few days ago,” said Archer’s friend, the Australian cricket captain Ricky Ponting – and yesterday, that was the order of description, “Archer’s friend” first.

“But you know the boys have come out and played unbelievably well for him today.

“He’s had a good game himself . . . you look at the way the guys started the game, you’d have to think that there was something a little bit extra on today’s game.”

Was there? This is an interesting question. Did the Kangaroos rise to another level simply because they were honouring the career of their Shinboner of the Century? Was there an Archer factor, especially in that first quarter?

“The Drew Petrie thing was a factor, I know that,” Brent Harvey said.

“Kicked five goals in 10 minutes, it was absolutely amazing sitting back. All you had to do was kick it into the forward line, he was on fire.”

And the Archer factor? “It’s very hard for us to say,” Harvey said. “Because if you can get up for a big game, why don’t you do it every week?”

Archer himself had 22 touches, but this wasn’t a game in which his influence was measured by his output, which was modest.

The other obvious question is whether Petrie’s 20 minutes, in which he was channelling John Coleman, Royce Hart and Carey all at once, had anything to do with the “Archer thing”. 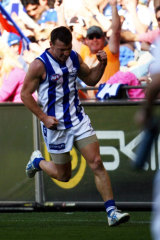 Petrie suggested it did. “A bit to do with Arch, for sure . . . he definitely deserved some repaying today, and all the boys that went out today were keen on repaying Arch for everything he’s given us.

“Certainly before the game, when we ran out and there was 300 kids lined up in Arch’s No. 11 and you saw the banner and you saw the crowd and all that, that just made you want to give your absolute all for that bloke.”

Some coaches are ambivalent about milestones, the theory being that to demand, or expect, a special effort on account of an individual carries the assumption that you don’t give the same effort when there’s no milestone.

Laidley is not one of those coaches. He likes milestones. “Ever since I’ve been coach, we’ve embraced it, and I think that you need to be able to do it. As the coach, I try and coach them through the week and about the occasion and about what mind-set you need. I embraced it.”

Laidley observed that Archer had found all the adulation too much. “He’s an action man.” The coach had told the players to “action the moment”, which is to say that they would be judged by their actions, not words. That’s how Glenn Archer lives and plays.