Port powerless as Cats in for the kill

GEELONG might have had the better of the opening salvos, but even as late as time-on of the first quarter yesterday, there was little indication we were about to witness not just a grand final thrashing, but a massacre so complete it was barely comprehensible.

One hundred and nineteen points, easily the biggest winning margin in grand final history. A score of 24.19, just 14 points shy of Carlton’s record score of 1972 – 43 three scoring shots to just 14. And so on. If we were due for another lopsided affair after two grand final classics, we sure got it. But boy did it come with a rush.

When Port Adelaide ruckman Brendon Lade palmed a ruck contest straight into Shaun Burgoyne’s lap for a brilliant goal late in the first term, Geelong led by just seven points. Sure, the young Power side had already committed some clangers, and shanked a couple of shots at goal, but Port led the clearance count eight to three, and with its second goal of the game, appeared to be finding some momentum.

Appeared being the operative word. For by quarter-time, the Power were already in deep trouble. Five minutes into the second term, the game was as good as over. And well before half-time, we were reaching for the record books. 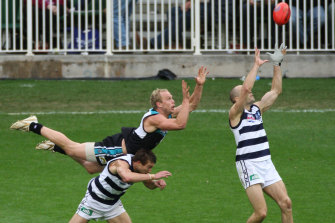 Geelong had been the dominant side all season through a superb mix of speed, skill and strength. Its rapid-fire answer to Burgoyne’s goal epitomised all those qualities. First came Josh Hunt’s kick to a contest featuring the big frame of Brad Ottens. The crumbs fell to Paul Chapman. He found Steve Johnson, who played on and kicked his second goal of the game.

Then came the symbolism. Mathew Stokes had gone off with what seemed a serious knee injury just six minutes in, but charged back on shortly before quarter-time, launched himself straight into a contest, and won a free kick. Then another team-lifting moment, Ottens chasing down Port defender Michael Pettigrew and winning a free kick for holding the ball.

Geelong was more committed. Now it would show it was more talented, too. Jimmy Bartel’s goal right on siren time was one of those moments a coach drags out again and again, a stunning piece of team football. It featured a brilliant chain of close-in handballs, Joel Corey to David Wojcinski to Gary Ablett to James Kelly to Joel Selwood, the latter’s kick inside 50 finding Bartel, whose left-foot snap was a gem. 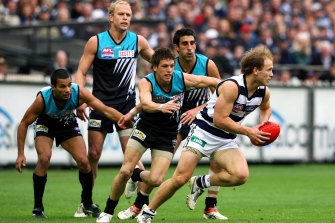 That made it 29 points. Within another eight minutes, by which time Geelong had kicked the last seven goals, the gap would become 53, Rooke kicking the next after Ling spun out of two tackles, then Chapman, then a double from Nathan Ablett, who’d struggled early but was now another Cat about to join what was quickly becoming a parade.

In midfield, where Ling pulled down the shutters on Shaun Burgoyne. Bartel and Corey racked up the touches, James Kelly got some important possessions, and Ablett, closely worn early by Dominic Cassisi, eventually broke the shackles. 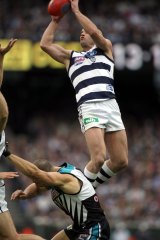 And particularly in defence. Geelong‘s back line has been superb all year, a brilliant mix of defence and attacking flair. But it might have saved its best for yesterday. Matthew Scarlett starved Warren Tredrea and Justin Westhoff, but also became a de facto attacker, ending up with 29 touches and even a couple of missed shots at goal. Enright, Andrew Mackie and Darren Milburn weren’t far behind, 73 disposals between them. Skipper Tom Harley dragged in seven marks.

It didn’t hurt, either, that Port Adelaide‘s forward line turned in one of the more insipid performances in grand final history. Not only did Daniel Motlop, Justin Westhoff and Brett Ebert fail to get their hands to the ball, they failed to exert even any defensive pressure.

The extent of contrast in forward set-ups was told perfectly by the tally of marks inside 50 – a staggering 21-6 Geelong‘s way. Embarrassingly lopsided. But there’s a lot out of this game that will leave Port Adelaide blushing. The Cornes brothers Chad and Kane kept up the fight. As did Peter Burgoyne. But that trio shared nearly one-third of Port‘s entire possession tally for the afternoon. Half-a-dozen Power players couldn’t even break into double figures.

Instead of a face-saving exercise, the second half became the cause of even more shame, Geelong kicking 13 goals to the Power’s two, including another 10 unanswered.

Significantly, though, even leading by a whopping 90 points at the final change, the Cats weren’t about to cruise over the line. They stood, arms linked, urging each other on as if this game was still very much on the line, then proceeded to ram home another four goals in just over 10 minutes.

A seventh AFL premiership had long been won, but it was a clear a point was being made. From the time it lost to the Kangaroos back in round five, Geelong had been uncompromising, focused.