Smith was filmed, as you know by now, with a small plastic bag of white powder. It was incriminating and damaging to him, his club and the AFL. The bag had an illicit substance in it. How do we know? Smith told us himself.

That a young footballer had taken drugs in his off-season is not unusual. The surprising bit was Smith chose to own it. Admittedly, it was hard not to. You don’t behave like that with a bag of icing sugar. But he could have tried to throw the onus back on the world and say: “You don’t know what was in the bag, it was all a prank.”

Smith’s response was refreshingly candid. The club handled it well with public statements but as yet there is no discussion of further action from them as the AFL integrity unit investigates. 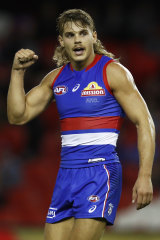 At some stage players will realise that stupidity has two stages; doing the drugs in the first place, then being filmed doing it. The AFL’s treatment of him and others like him suggests the second level of stupid is denser than the first.

This is the intriguing thing about what happens next. History from the Shane Mumford, Tyson Stengle, Brad Crouch incidents says Smith will be punished by the AFL for conduct unbecoming and or bringing the game into disrepute and most likely receive a suspension of a couple of games on top of his existing two-game ban for headbutting.

Based on history that would be appropriate – it has brought the game into disrepute just as Mumford and his funny-sad video did. Just as Stengle and Crouch did because they were caught with their drugs by police.

What is interesting is that this is the only time players are punished. The punishment is not for the drug use, it is for the filming or public dissemination of it. Smith using drugs, on his holidays and at a time when he admits he was spiralling out of control and needing help for mental health problems, would not otherwise have drawn punishment. The AFL’s welfare-based drug policy does not seek to punish players.

This is not necessarily wrong but an oft-criticised element of the illicit drug policy by the fan and a frustration for the paid-up member is that the policy does not punish the player for behaviour that is at best suboptimal for them performing to their best as footballers.

Last week Jai Newcombe rightly got a lot of love for his second half for the Hawks. Turning a mid-season rookie draft pick into a genuine inside midfielder who was the team’s most influential player is quite the effort.

But for a second week, the teammate who had been feeding the Rising Star contender, Ned Reeves, deserves equal credit.

At 23, Reeves is too old for that spurious award. But any judgment of young talent that looks at not only what they are doing now but speculating on what they could become based on their first 10 or 20 games would regard Reeves as a player of serious potential. 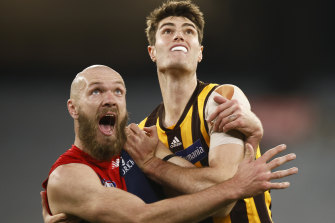 He is 211 centimetres tall and played just a dozen games. At 23 he has taken time to come through but that is partly because he has taken a long time to put on the weight that his frame demanded to compete at the level. His palm work is very good and he is now taking marks and moving to the right places to back himself in the air.

Crowds have been down and relatively poor all year for myriad reasons, none the least of which being that during COVID we became comfortable watching the footy from the couch. And with interest rates rising and inflation up, the cost of living pressures must be playing a part. The issue was well-explored recently by Greg Baum.

To then run into the speed bump of three deflating bye rounds only worsens an existing problem. The byes take the air, the momentum out of the season. The players demand them in the season, but the AFL should push against it again with the next CBA. Players are paid to play so play. If you need a rest, then rest.

There was never going to be a good time to host North and GWS in Melbourne but this weekend there was nowhere to hide. As a stand-alone game on a Sunday afternoon mid-season when you are trying to bring people back to the football, this was not a drawcard.

North were hard to watch with a team already thin on for talent carrying half a dozen players. GWS have rediscovered a forward-half pressure game, a more aggressive, freer ball movement game that has looked refreshing. North, on the other hand, appears confused as to what their preferred style of game is.

Not strictly AFL, OK not football at all, but on the weekend former 800-metre national record holder Joe Deng proved he was back to his best with a 1:44.69 run in France. His training partner Peter Bol, who came fourth in the 800m at the Olympics and took Deng’s national record, set a new PB in the 1500m at the same meet when he finished in 3:35.89. The world champs are next month and the Commonwealth Games start four days after they finish.