Brisbane coach Chris Fagan has defended the Lions’ modest recent finals record and pointed to Richmond as an example of growth on a day he kept the Western Bulldogs guessing at selection.

The Lions have won only one of five finals under Fagan heading into Saturday night’s knockout clash at the Gabba.

Crunched by Melbourne in last week’s qualifying final in Adelaide, the Lions have worked on their team defence this week, as well as determining how they will handle the absence of hit-up forward Daniel McStay. But regardless of the result, Fagan claimed on Friday that his side, which secured the double chance only in round 23, was still a work in progress.

“If you are referring to the fact that we have played five finals and only won one … I think both years we have been beaten by both of the grand finalists and we are a young, developing team,” he said.

“Don’t forget, two years ago, we couldn’t get ourselves off the bottom of the ladder. Part of the process of becoming a great side is getting into finals and doing your best to win them and let those experiences build.

“We know the job in front of us but win or lose that result doesn’t define us or have you guys describe us as a team that can’t play well in the finals.

“I look at the Richmond team that became that fantastic team of recent times. Three years in a row they lost elimination finals and then they didn’t make the finals. It’s all about the learning process and the hardening process.” 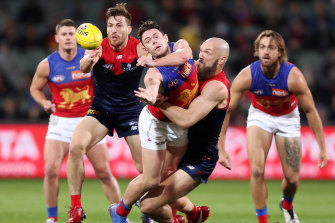 That hardening will need to be on show against a Bulldogs’ midfield that regained its cohesion and toughness in the wet against Essendon last weekend.

The absence of McStay (concussion) has dominated selection talk, for he has been a key linkman heading inside attacking 50, while booting 28 goals in 19 matches.

The Lions, beaten by the Dogs in round four at a cold and wet Ballarat, have recalled Deven Robertson and Jack Payne but Fagan threw up several options in how they could replace McStay. This included even sending star defender Harris Andrews forward, although he appears to be carrying an injury.

The Bulldogs arrived in Brisbane on Friday and had a light run at Gabba, before they were confined to their team hotel as part of strict health protocols.

Meanwhile, Gold Coast have parted ways with football manager Jon Haines, as the club begins to shake up its football department.

Haines joined the club in 2017 with coach Stuart Dew, who is under pressure to retain his job. List manager Craig Cameron will replace Haines in the short term.