Who could have imagined that a young firebrand from the Roosters, who was born in Sydney, raised in Bronte and grew up playing for Clovelly, could bring the always tricky issue of international eligibility to a head?

That’s what Victor Radley has done by declaring his allegiance to England for the Rugby League World Cup later in the year.

The 24-year-old may have stunned most of us with his bold decision, not least Kangaroos coach Mal Meninga and NSW coach Brad Fittler, but the truth is he’s been weighing up this decision for almost two months.

That’s when he approached Roosters coach Trent Robinson, who in turn told him to take some time and consider the implications of what he was doing.

Under current eligibility laws, playing for England rules any player out of State of Origin, a selection that’s tantalising close for Radley after he was included in the Blues’ squad for game two.

After considering Robinson’s advice, Radley still wanted to play for England — chiefly to honour his father, Nigel, who is from Yorkshire.

Victor Radley should be able to play for NSW and England.Credit:Getty

Unsurprisingly, some have used it as another reason to whack Fittler and NSW and say a Queenslander would never do such a thing because they are Queenslanders or something like that.

Others have branded Radley’s call “strange” and “wrong” and let’s not even start on what’s being said in the sewer of social media.

Bottom line is Radley felt a deep connection to England through his father and wants to play for them, in honour of him. Naturally, people are outraged by this.

It’s possible to feel allegiance to two things at once, maybe three things.

For instance, I like almond and classic Magnums. Another example is Brian To’o and Jarome Luai, who have pledged their allegiance to Samoa for the World Cup but also love playing for NSW.

Rugby league is a unique sport played in a unique part of the world, increasingly influenced by those from Pacific Island countries.

When State of Origin started in 1980, it was a straight-out selection trial for the Kangaroos. But those times have changed and its eligibility rules must change with it.

The game has tied itself in knots for years with two tiers, plonking Australia, New Zealand and England into one tier, the so-called minnow nations into tier two.

But those constrictive labels are outdated and should be abandoned.

For starters, rugby league internationals are barely played, including the years before the COVID-19 pandemic.

Secondly, second tier Tonga has beaten Australia, New Zealand and Great Britain in the past five years. The line is starting to blur. Heaven knows what Samoa could achieve if they got their act together.

Both Meninga and Fittler have advocated for the tier system to be abolished and rightly so.

The problem is where Origin eligibility fits in all this, but surely the solution is rather simple: if you qualify for NSW or Queensland, you should be able to play for either, regardless of which country you decide to represent.

Radley’s decision to play for England is bringing an important issue to a head for rugby league, which has step-toed around it for years.

ARL Commission boss Peter V’landys loves nothing more than firing a shot at the rival code. If he really wants to hurt it, sort out international footy.

Panthers looking for a Bali high

NSW halfback Nathan Cleary trades Bintang singlet and thongs for footy jersey and boots when he returns from a quick sojourn to Bali for Penrith’s clash with third-placed Cronulla on Saturday. 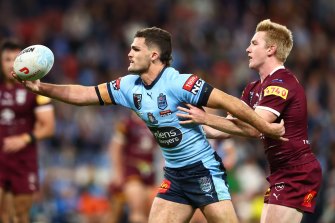 Nathan Cleary returns for the Panthers this weekend after a break in Bali following NSW’s loss in Origin III.Credit:Getty

It’s unlikely Cleary and the rest of the Panthers’ Origin stars heard the noise about the NSW loss to Queensland putting a chink in their NRL premiership defence.

In other words, the Maroons showed the rest of the comp how to rattle the Panthers, seven of whom were in Fittler’s team.

But there might be something in it. Queensland’s video sessions for the decider didn’t focus on the game two loss, nor the game one victory.

Instead, players were put through endless video sessions of South Sydney’s shock victory over Penrith in week one of last year’s finals series.

What a hero you must be to stand within earshot of someone like Eddie Jones and call him a “traitor” while someone videos the entire episode on their phone — all from the safety of the grandstand.

Never one to take a backward step, Jones went at the spectator who heckled him in the aftermath England’s victory over the Wallabies at the SCG on Saturday night.

When I interviewed Jones the last time England played on these shores, in 2016, he remarked: “My greatest weakness is that I can’t tolerate people.”

Now Rugby Australia wants him back, as per reports in the Herald, although the governing body is now backing away from the idea.

“No, I’ll never drink from the same well twice,” Jones told me. “I learnt my lesson with the Reds. I tried to do something for the sake of doing something. Now, I just do things that I want to do.” 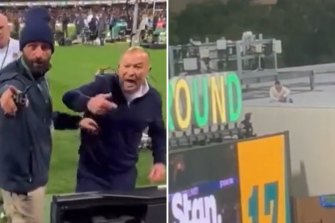 Eddie Jones takes on a heckler at the SCG; and a fan on the roof of the O’Reilly Stand.Credit:Suppled

There’s nothing worse than lining up at the SCG to use the men’s urinals, but have things become so bad that people are now climbing onto the roof of the O’Reilly Stand to do a wee-wee?

Seems like they are after one gibberer did just that during the Wallabies-England match. He’s been banned for life but may I ask this: how did he get up there in the first place?

The SCG appears to be going through the same staff shortages as the rest of the known universe.

Thousands were locked out of the venue an hour before the match, mystified that they weren’t allowed in.

Typical complaints about long lines to get beer and food have been pinging this column’s inbox all week.

Surely, the wise heads at Venues NSW will ensure this isn’t the case when the brand new Allianz Stadium opens next month.

“I’m contracted until 2024, I live seven minutes from training, so why would I want to go anywhere?” — Parramatta coach Brad Arthur amid speculation he wants out. Who cares about premierships when you can beat Sydney peak hour?

With the flick of his mullet and stroke of the bumfluff on his top lip, Cameron Smith held his nerve and line at St Andrews, the home of golf, to win the 150th British Open by one stroke. He then poured exactly two beers into the Claret Jug and sculled them while listening to Cold Chisel.

It’s a big weekend for … the Wests Tigers, who might have to coach themselves if their coaches keep testing positive to COVID-19 after Brett Kimmorley and Tim Sheens went down with the dreaded virus. Actually, maybe that’s the best coaching structure for the Tigers.

It’s an even bigger weekend for … Peter Bol, who at the time of writing was on track to reach the final of the men’s 800m at the IAAF world championships in Oregon. Let’s see if he can channel the spirit of high jumper Eleanor Patterson who won gold earlier in the week.