Dane Haylett-Petty, or DHP, could cite historical precedence for his decision to continue his playing career despite the threat of concussion. He would, after all, be following in the footsteps of another three-letter Wallabies great.

Only once before have I been brave enough to write a column suggesting a player should consider retirement – and, truly, it was only a suggestion, because that is a decision every footballer should make on his own. Still, how did that well-meaning attempt pan out? Not well.

Tatafu Polota-Nau, TPN, had 50 Tests and six major concussions to his name on May 8, 2015 when I put it to him that the oft-used expression “you’re a long time retired” can be interpreted in two ways. Yes, it provides a ready excuse for one more season at the end of a long career, which is the way most footballers deploy it. On the flip side, it highlights that there is a lot of life still to be lived once the boots are hung up.

The concussions were mounting up with such frequency that Polota-Nau, then 29, volunteered to act as a guinea pig for a study into the cumulative effects of such injuries being run by one of the country’s foremost neurologists, John Watson.

He knew the risks he was running yet continued to play. In the years since 2015, he added 40 Tests to his tally, took his Waratahs’ appearances to 140, turned out 13 times for the Western Force and 46 times for the Leicester Tigers. All this before COVID-19 brought an end to his career about this time last year.

From May 2015 to July 2020, he essentially extended his career by a third, seemingly with no further damage done – although the truth or otherwise of that statement won’t become apparent for years. 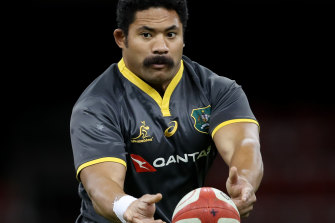 Tatafu Polota-Nau, then 29, volunteered to act as a guinea pig for a study into the cumulative effects of concussions.Credit:PA

So I venture down the path of giving similar advice to Haylett-Petty with some trepidation. All I can say by way of explanation is that when I read Tom Decent’s exclusive that DHP, 32, had decided to leave the Melbourne Rebels and reignite his career in Perth before finding an overseas club to play out his remaining rugby days, I felt a chill down my spine. Everyone else I have spoken to about it had a similar reaction.

Haylett-Petty is one of the good guys. He was the Rebels captain at the time he was seriously concussed in a seemingly innocuous tackle during an All Blacks Test last October, a well-respected leader of men. No fuss, no histrionics, just a dependable member of the Wallabies at wing or fullback. In short, he is a player no one wants to see get hurt.

Seven months after his injury, he attempted a comeback in Queensland Premier Rugby. It wasn’t long before the nausea returned. Sensibly, he backed off.

But if he takes up with an overseas club, he will be moving from an environment where everyone errs on the side of caution to one of “she’ll be right, mate”. Clubs in France, though less so in Japan, are notorious for demanding their pound of flesh. In a general sense, this is one of the reasons Dave Rennie does not exploit the Giteau law, because he has no real way of measuring how hard a player has been worked or whether he has received adequate rehabilitation.

Of course, it is often the player who pushes hardest for an early return. How frustrating it must be for a footballer to have a body that is fully fit but a mind less so.

And, of course, no one knows the long-term effects of concussion. Yes, sporting officials the world over are terrified by the prospect of lawsuits filed by players who were damaged on their watch, but generally speaking the approach is motivated purely by concern.

In Polota-Nau’s case, his coach Michael Cheika refused several times to select him for the Waratahs even though he had shown no signs of concussion. “We just want to make sure everything is right,” Cheika said at the time. “Because it is such an unknown.”

We know exactly what you mean, Cheik. Medically speaking, concussion is still largely “terra incognita”. Those who play on after suffering a major head blow might encounter no further ill-effects. Others are not so lucky. Mood swings can be an early indicator of impending trouble but the full effects might not surface until years into the future.

Two days after writing that column in May 2015 warning Polota-Nau of the dangers he faced, I suffered a stroke. You never know what the future holds.