They came in their thousands. They blocked traffic. They filled bars. They sat respectfully apart.

On a December, not September, afternoon, and a Sunday rather than a Saturday, Melbourne fans finally got their chance to see the elusive premiership cup raised at the MCG.

Demons fans watch a replay of the grand final at the MCG.Credit:Getty Images

They arrived early and in numbers. More than 10,000, but who was counting? Those who were there were making it count. It felt like football because Punt Road was once again at a standstill.

They filled half the ground – of course the MCC members and Olympic stand side, the Demons wing – to watch a replay on the big screen of the entire game. They enjoyed each touch, grumbled, cheerfully this time, at the umpiring and thrilled to the second-half surge.

They had their own half-time entertainment – former player Russell Robinson and his cover band played. The president Kate Roffey spoke briefly; so too CEO Gary Pert, to talk excitedly of the club’s bright future on and off the field. 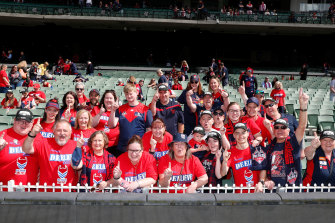 But this was not a day for speeches, not from administrators anyway. This jolly Sunday afternoon was all about the players and the cup and fans bearing witness with their own eyes that it all did actually happen. It was real and not some cruel video hoax out of Perth.

The players were due to be presented at 1.55pm. And with them, of course, the cup.