No one would have thought it possible that Quade Cooper could rein in his extraordinary exuberance to give the Wallabies the leadership they need at five-eighth. But however he did it, he will need to do it again if selected against Argentina on Sunday morning.

When coach Dave Rennie restored Cooper to the Australian Test side for the first time in four years against the Springboks on the Gold Coast last year, everyone held their breath.

“Cooper’s selection screams of absolute panic,” wrote one respected rugby journalist at the time. In truth, he pretty much was voicing what many people were thinking.

There is no question that Cooper is capable of feats of brilliance on the rugby pitch which almost pretty defy description. But – and this is an awfully big BUT – he is also capable of overplaying his hand completely and landing his side in all kinds of pain. Why was Rennie even venturing down this path, given that Reece Hodge had played so competently at No.10 when the Wallabies defeated the All Blacks in Brisbane?

Cooper, however, came to the party, putting a tight check on his instincts and playing a wonderfully disciplined game against the Boks, topped off by a match-winning penalty goal right at the death. Then he did it a second time against the world champions, winning even more comprehensively, 30-17, before leading Australia to a sweep against this weekend’s opposition.

How the Wallabies could have done with his unembellished control from five-eighth against England last month. But injury intruded in the warm-up in Perth and Cooper was forced to watch the series from the sidelines.

Now, if the injury co-operates, he is likely to be back in harness for the clash with Argentina in Mendoza. This time, however, it may be more difficult for Cooper to keep his emotions in check, way more difficult. Because this time it is personal.

This is a Pumas side coached by Michael Cheika, the man who seemingly terminated Cooper’s international career with the Wallabies. Although the statistics demonstrated that the Wallabies stood a better chance of beating the All Blacks with Cooper at 10, it was almost invariably Bernard Foley named by Cheika at five-eighth.

Cooper never won Cheika over. And it’s fair to say Cheika never won over Cooper. The then-Wallabies coach picked him almost as an afterthought for his first World Cup in 2015 and then played him in only one match, against a gutsy but outclassed Uruguayan side.

That day the best and worst of Cooper was on display. He carved the South Americans up, far more so than they deserved. He was brilliant and flamboyant in attack, hitting wide attackers with laser-guided passes which almost compelled them to run the right lines. Of course, against a no-name opposition, none of that counted in his favour. And because he screwed up in defence and found himself needlessly yellow-carded, Cheika seemed fully justified in wiping his hands of him. 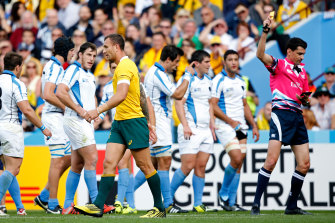 Quade Cooper made just one World Cup start under Cheika – against Uruguay in 2015 when he was yellow-carded.Credit:Getty

Astonishingly, he resurrected Cooper in 2017 for what most people concede is the toughest task in world rugby, the All Blacks at Eden Park. After playing Foley in Sydney where the Wallabies rode home-town support to a 27-19 win over New Zealand, Cheika suddenly installed Cooper at five-eighth at the volatile venue where Australia hasn’t won since 1986.

It looked like Cheika was setting Cooper up to fail and that’s precisely what occurred. With the Kiwi fans voicing their old 2011 “Public Enemy Number One” chant to give the Australian playmaker an extra jolt of hostility, Cooper and the Wallabies predictably failed. He was replaced at the 57-minute mark.

Who can say whether this is when the faultline ruptured? All that can be said with certainty is that when Cheika finally stood down as Wallabies coach following a 2019 World Cup in which Cooper could have played a vital part but wasn’t even selected in the squad, Cooper didn’t miss him.

“If he cared about Aus rugby he would have done it a while ago,” he tweeted.

Now they find themselves on opposite sides, with Cheika facing his first Rugby Championship Test as coach of Argentina. Emotions will be running high, but it is imperative that Cooper draw on all his maturity as a 34-year-old and keep his under tight control, especially since his ultimate foil, Samu Kerevi, won’t be carrying the ball alongside him. The compensatory good news is that Cooper now has Rennie in his corner. He is the anti-Cheika of coaching, the calm voice of reason.

Like Waratahs coach Darren Coleman, who has just re-signed hot-headed hooker Tolu Latu, Rennie knows that if his reading of a key player is faulty, his own judgment will be called into question.

He must hammer home that this is not about Cooper v Cheika. It’s Australia v Argentina, and with Cheika now at the peak of his powers – as he always is with a new side – the Australians will need to be fully at their best.